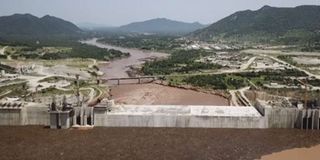 The African Union (AU) on Sunday announced failure of the latest round of talks between Sudan, Egypt and Ethiopia on the Grand Ethiopian Renaissance Dam (GERD), official SUNA news agency reported.

Naledi Pandor, the international relations and cooperation minister of South Africa, current chair of the African Union, expressed regret over the deadlock the talks have reached, SUNA said.

Pandor said she would refer the matter to South African President Cyril Ramaphosa, the current AU chairman, for necessary measures.

"We cannot continue with this vicious cycle of circular talks indefinitely given the direct threat posed by the GERD to (Sudan's) Roseires Dam, the storage capacity of which is less than 10 per cent of that of the GERD, if it is filled and operated without agreement or daily exchange of data," SUNA quoted Abbas as saying.

Sudan has filed a strong protest to Ethiopia and the AU, the sponsor of the GERD talks, over the letter sent by the Ethiopian irrigation minister to the African Union, Sudan and Egypt on January 8 in which he announced Ethiopia's intention to continue filling the GERD on July 2 regardless of whether or not there is an agreement.

Earlier in the day, a six-party meeting of ministers of foreign affairs and irrigation of Egypt, Sudan and Ethiopia was convened, chaired by South Africa, to discuss their differences on GERD in order to reach a binding deal regarding the rules of filling and operation of the dam.

Sudan, Egypt and Ethiopia have been negotiating under the mediation of the African Union over technical and legal issues related to the filling and operation of the GERD.

The Sudanese negotiators believe that the GERD talks should go beyond the level of irrigation ministers to the level of the African Union and the leaders of the three countries to provide political will to bring their positions closer.

Ethiopia, which started building the GERD in 2011, expects to produce more than 6,000 megawatts of electricity from the project, while Egypt and Sudan, downstream Nile Basin countries that rely on the river for its fresh water, are concerned that the dam might affect their water resources.