back to 2015 - Cycling Tour for Truth, Peace, Justice and Eritrea - reported on the 7th of March by TESFANEWS 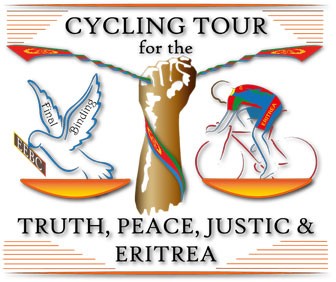 By E-SMART and ECU,

THE Cycling Tour for the Truth, Peace, Justice and Eritrea will begin in Sweden on Tuesday, March 31, 2015 on a more than 1700 km bike ride that will end in Geneva on Monday the 13th of April.

In Geneva the cyclists will deliver a memorandum to the UN on the occasion of the 13th anniversary of the final and binding Eritrea-Ethiopia Boundary Commission (EEBC) delimitation decision that Ethiopia refuses to abide by in breach of international law.

Twenty five cyclists from ten different countries (Eritrea, Canada, Denmark, Germany, Italy, the Netherlands, Norway, Sweden, Switzerland and the UK) will be cycling through eight German and three Swiss cities covering over 1700 km and along the way highlighting the truth about Eritrea and its people and how, despite repeatedly being wronged by the west, the country is forging forward and has become an oasis of peace and harmony in the Horn of Africa.

They will be calling for an immediate and unconditional implementation of the 13-year old, final and binding, boundary decision and an end to Ethiopia’s illegal occupation of sovereign Eritrean territories, including the town of Badme. Furthermore, they will call for an end to the illegal UN sanctions imposed on Eritrea based on totally fabricated and falsified “evidence” by Ethiopia and its western enablers.

Along the way, they will deliver memoranda to local officials, talk to the media, meet with friends of Eritrea, and will also spend time with members of Eritrean communities whose families are affected by Ethiopia’s continued illegal occupation of Eritrean territory and by the illegal UN sanctions.

This Cycling Tour is sponsored by Eritrean organizations and communities in Europe and North America, the Eritrean Cycling Union and the E-SMART Global Mekete.