is an award-winning journalist. For over 25 years, he worked as a sub-editor and writer for The Mirror, Irish Times, Irish Independent and Britain's Independent, among others. 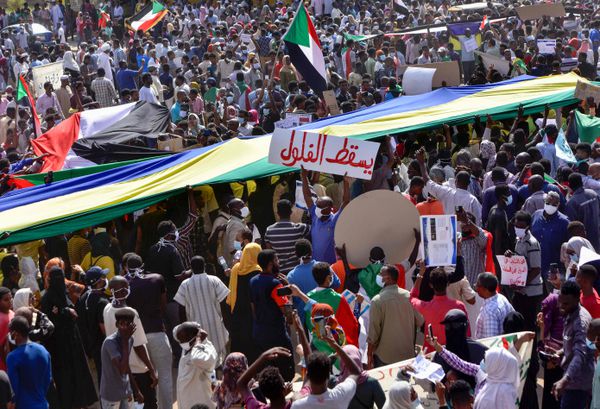 Sudanese demonstrators take part in a protest in the city of Khartoum Bahri, the northern twin city of the capital, to demand the government's transition to civilian rule, on Oct. 21, 2021.-/AFP/GETTY IMAGES

The geostrategically important country of Sudan is at a dangerous crossroads in its political transition. Mass protests have so far remained largely peaceful, but the military establishment is poised to crack down.

There are a lot of geopolitical issues at stake. China and Russia have both long-term interests in this Horn of Africa country which is a gateway from the Red Sea to the wider African continent. Sudan has been a key node in China’s ambitious global economic plans, while Russia is proposing to build a naval base at Port Sudan in the Red Sea.

Washington has made a recent foray into Sudanese politics. For three decades, the country was a pariah under former dictator Omar al-Bashir who was ousted by popular protests in early 2019. Since then, the United States has quickly moved to normalize relations with Khartoum. In December last year, Sudan was removed from Washington’s blacklist of terror states and afforded access to international loans and possible debt relief.

American military and political officials have been busy flying to Sudan to solidify relations after decades of vacuum. The deputy commander of AFRICOM, Andrew Young, extolled a “new beginning in relations” with Khartoum earlier this year, promising to professionalize the armed forces under the Pentagon’s tutelage. USAID chief Samantha Power on a visit in August hailed Sudan’s prospects in partnership with the US. 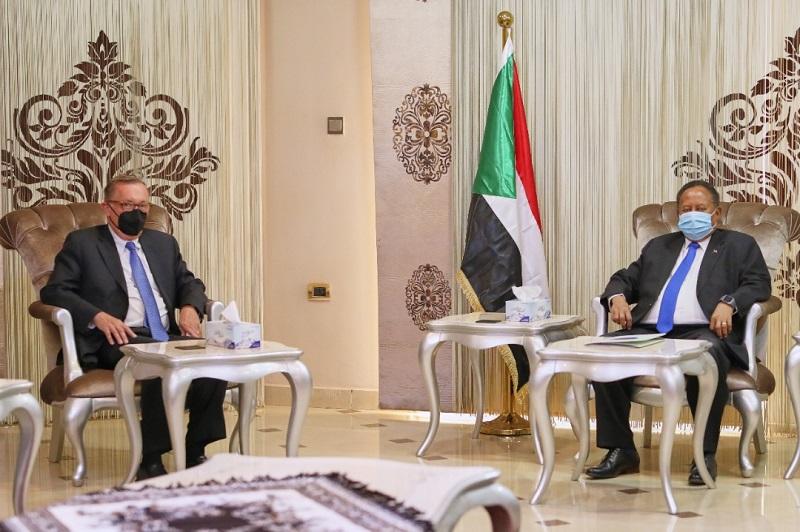 The Prime Minister Dr. Abdullah Hamdouk, received at his residence, Jeffrey Feltman, the US President’s envoy for the Horn of Africa, his assistant Brighton Nouf, and Bryan Shawkan, the American Chargé d’Affairs in the Khartoum.

This month Jeffrey Feltman, the US envoy for Horn of Africa affairs, has been in Sudan on two occasions to hold close discussions with the governing administration. Feltman laid out an array of economic and political benefits for Sudan if it follows the transition to civilian rule as prescribed by Washington.

Following the overthrow of strongman Bashir, the transition to a new government has been overseen by the Sovereignty Council of Sudan. It is an unelected technocratic administration comprising civilian and military figures. The nominal prime minister is Abdalla Hamdok, a former UN economist. But the military seems to hold the upper hand with the council chaired by General Abdel Fattah al-Burhan. The military bosses are accused of stifling the process to full civilian rule and popular elections. An aborted military coup last month tried to collapse the civilian-military council for a full-blown return to dictatorship.

Over the past week, protests calling for a speed-up in transition to civilian rule have been countered by demonstrations in support of the military, who are being called on to sack the interim government over claims of corruption and incompetence.

Civic frustration is mounting across Sudan owing to a shortage of basic consumer goods caused by protests at Port Sudan. People are angry at the slow pace of economic and political progress after years of US sanctions hampering the economy. There has also been widespread disruption from deadly floods due to an unusually heavy rainy season this summer.

The Biden administration has backed Hamdok, the interim prime minister, over his plan for a political transition. Elections have been promised for 2023, which means it will have taken four years since Bashir was deposed for Sudan to move towards civilian democracy.

Part of Washington’s renewed interest in Sudan is accounted for by its acceptance of US efforts to normalize relations between Arab nations and Israel. Sudan became the third Arab country to recognize the state of Israel – along with Bahrain and the United Arab Emirates. That move has garnered political and economic favors from Washington.

Another geopolitical factor is Washington trying to outmaneuver China and Russia in what is a key strategic location. Sudan’s geography gives it potential control over a key maritime chokepoint in the Red Sea, linking Asia and Africa, and the oil-rich Persian Gulf with Europe.

China has been the main trading and investment partner with Sudan. Beijing is well aware of the potential for energy, minerals and agriculture. While Russia is vying to open a new naval base at Port Sudan which would be its first in Africa since the dissolution of the Soviet Union. Sudan is a crucial land corridor to the rest of North and Central Africa, having borders with Egypt, Libya, Chad, the Central Africa Republic, Eritrea and Ethiopia, as well as of course neighboring South Sudan.

Russia agreed to build the base at Port Sudan back in 2017 when Bashir was in power. However, since Khartoum has embraced the United States, plans for the Russian naval installation have been put on hold. It seems that the Sudanese military chiefs are the ones who have put the brakes on. Chief of Staff General Mohamed Osman al-Hussein announced a review of the proposed Russian base in June.

From Washington’s point of view, it is facing a delicate balancing act in Sudan. It is committed to a democratic transition to appease popular protests. But the US needs to keep the country’s military strongmen onboard if Sudan is to follow Washington’s course to cut out China and Russia. No wonder the State Department’s Feltman is on a frenetic schedule to Khartoum these days.

The pace of Sudan’s transition is being set by Washington’s geopolitical calculations. Keeping China and Russia out and coming down in favor of the military faction may override the niceties of backing civilian rule.