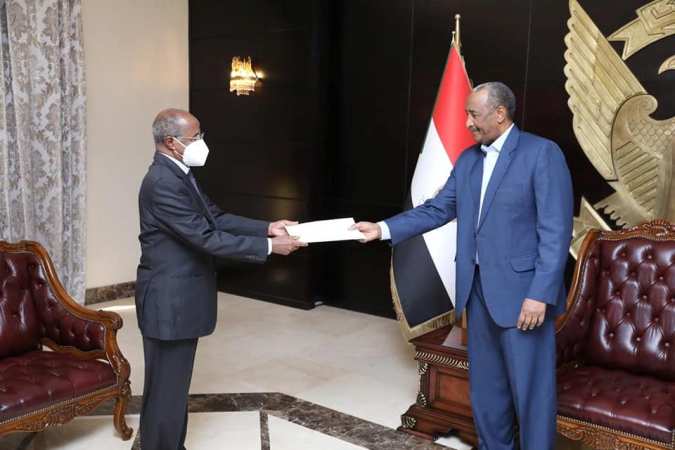 KHARTOUM – Eritrean government presented Saturday an initiative to the Chairman of the Sovereign Council in Sudan aimed at ending the political strife in the neighbouring country.

The same delegation met Al-Burhan on April 11 to discuss the political situation in Sudan and expressed the Eritrean government’s solidarity with al-Burhan in his efforts to overcome the ongoing crisis.

According to a statement issued by the Sovereign Council following the meeting, the delegation handed al-Burhan a message from Eritrean President Isaias Afwerki.

“The delegation came bearing a vision that aims to bridge the views of the Sudanese parties to resolve the political crisis in the country,” further reads the statement.

The initiative was made out of Eritrea’s keenness and desire to establish security and stability in Sudan and the region, further said the Sovereign Council.

However, it did not elaborate on the Eritrean initiative.

Eritrea had hosted peace talks to end the conflict in eastern Sudan, and a peace agreement was signed that ended an armed rebellion by the East Front in October 2006.

Eastern Sudan is witnessing political and tribal turmoil due to the rejection of the Hadandawa tribe, one of the components of the Beja, for a peace agreement signed in 2020 with one of the Beja factions.

The UNITAMS, African Union and IGAD are preparing to launch an intra-Sudanese process dealing with the restoration of the civilian transitional government which had been dissolved by the military component in October 2021.