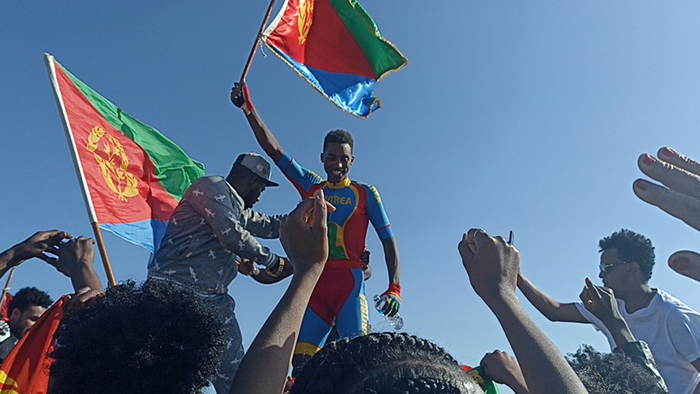 MARKET | 22/04/2022 | 11:17
by tuttobiciweb
There is a new face at Bardiani CSF Faizanè : Henok Mulueberhan arrives with immediate effect . The twenty-two year old Eritrean talent had already signed an agreement to switch to Team Qhubeka this year, then the South African team no longer continued with the WorldTour line-up and so Henok had married to the German Continental Bike Aid but consensually dissolved the contract to switch to the court of the Reverberi family.
In the last month of March, Mulueberhan (in the big world of the web his surname can be found written in different ways, we have chosen the one with which he is registered by the UCI) won the title of African road champion in Egypt, at the end of an exciting head-to-head with former South African pro Reinardt Janse van Rensburg.

Grown up in the Qhubeka team's nursery, Mulueberhan in 2020 was eleventh in the Giro d'Italia Under 23 and last year he often raced in Italy obtaining good placings in international races for Under 23 and nineteenth at the Tour de l'Avenir . He raced with the professionals, finishing sixth in the Giro dell'Appennino, while this year in the Bike Aid jersey he was sixth at the Tour of Antalya ( where tuttobiciweb had interviewed him ) and fifth at the Tour of Rwanda.

It cannot be ruled out that Bardiani, which at the beginning of the season has come to terms with Giovanni Visconti's retirement from competitive activity, will be able to field the new purchase already at the next Giro d'Italia which will start on 6 May from Hungary.