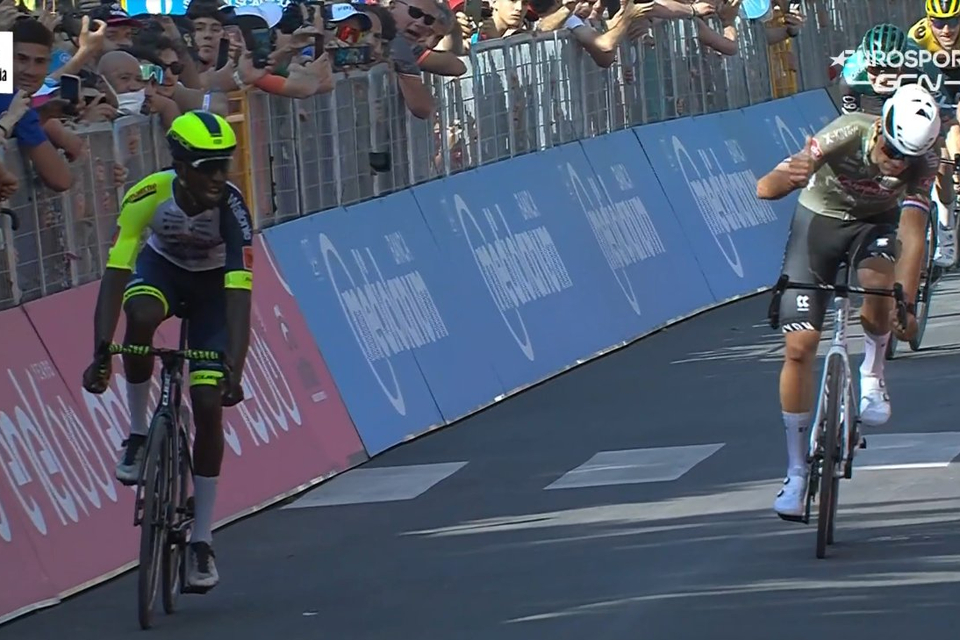 Biniam Girmay wrote a new page of cycling history for Africa in Jesi. After being the very first black African to ever win a WorldTour race like Gent-Wevelgem, he is now also the very first Eritrean and African to win a stage in a Grand Tour. Mathieu van der Poel simply lost in a sprint man against man. And the Dutchman admiringly gives his thumbs up to the world driver of Intermarché – Wany-Gobert.

How did the victory come about?

In Jesi, a select group sprinted for the stage victory after the selection happened on the Monsano, the last climb of the day. There the chaff was separated from the wheat. In the sprint itself there was no limit to Biniam Girmay. Van der Poel tried to keep up with him, but at 25 meters from the finish, the Dutchman knew that he was lost. And with that, Girmay also took his revenge, because after the Saturday stage in Naples, MVDP reacted scornfully because the Eritrean of Intermarché – Wanty Gobert, in the opinion of the Dutchman, aimed his wheel for far too long, so that the group with Thomas De Gendt sprinted for the victory. .

Mathieu van der Poel immediately showed his cards in the final, because with four from Alpecin-Fenix ​​(Bayer, Krieger, Oldani and De Bondt) ahead of MVDP, they raced at the front of the pack to the foot of the 4.2 kilometer long hill that rises an average of 4.2 percent. Only the classification riders were not planning to suffer damage. Ineos-Grenadiers took over the lead on the climb itself with the tandem Sivakov-Carapaz, with the door open at the back and it also went too fast for Arnaud Démare.

Alessandro Covi went looking for a first Italian stage victory at 9.2 km, but it was also a measure for nothing for him. Also because Intermarché – Wanty-Gobert was omnipresent in the leading group.

The flight of the day stranded 21 km from the Viale della Vittoria in Jesi. The game for the stage win in the tenth stage already started at 33 km. Then Christopher-Juul Jensen counterattacked for the second time. Unfortunately, he had two watchdogs with Dries De Bondt (for Mathieu van der Poel) and Lorenzo Rota (for Biniam Girmay). In the meantime, Alessandro De Marchi had shaken off all his fellow escapees Bais and Lawrence Naesen, but when he started his solo, the 35-year-old Italian was only one minute ahead of the chasing peloton. In the end, Alessandro De Marchi would lead 171 km.

Who was in the spotlight?

The inevitable Mattia Bais (Drone Hopper-Androni Giocattoli) again. Together with Lawrence Naesen and Alessandro De Marchi, the offensive Italian had to box for ten kilometers before the peloton switched to cruise control on the flat roads along the Adriatic Sea. Alpecin-Fenix ​​and Lotto-Soudal drove the large group who, after thirty kilometers, were already behind by more than six minutes.

Mattia Bais was allowed to pick up the points for the intermediate sprint from the two World Tour riders in Civitanova Marche. Giacomo Nizzolo was fastest in the peloton, ahead of Arnaud Démare and Biniam Girmay. With only 25 points to be awarded to the winner at the finish, the French Groupama-FDJ sprinter was already halfway through with certainty that he would stay one more day in the 'maglia ciclamino'.

Once the road started to wave, Christopher-Juul Jensen (BikeExchange-Jayco) opened on a terrain with more than 1700 meters to overcome in the last 94 kilometers. At the Colle dell'Infinito in Recanati, at more than 70 km from the finish, David De la Cruz (Astana) also counterattacked, but he had to conclude that he is not the man who would honor Michele Scarponi in Jesi.

What did the favorites do?

Let's talk about the sprinters: Caleb Ewan immediately unloaded on the first hill in De Marken, together with Roger Kluge. On the Colle dell'Infinito, Mark Cavendish also had to give up the role, while Arnaud Démare whistled at the front of the pack after that cliff.

And then there were the classification riders: Richard Carapaz fell after the first climb, but the leader of Ineos-Grenadiers quickly returned to the peloton, although you could see the traces of a fall. By switching bikes again for the final, he rode behind the big hurdle a second time.

Mathieu van der Poel was the next to have bad luck when something in his gear turned and at 55.5 km he suddenly fell a minute behind the pack due to the bike change and flew through Montevano to retake his position.

Simon Yates took the start, despite the sore right knee. The BikeExhange-Jayco leader slipped out of the standings on Sunday and is now focusing on stage victories. Although he already has one line on his counter with the time trial victory in Budapest.

What did the Belgians do?

Lawrence Naesen drove himself into the spotlight a second time. Oliver's younger brother was also noticed on the final slope of the opening stage in Hungary, won by Mathieu van der Poel.

On Tuesday afternoon he threw himself into the attack after 5 km, together with Mattia Bais and Alessandro De Marchi. Initially, Naesens teammate Nans Peters wanted to go out, but Thomas De Gendt put a stop to that. Together with Senne Leysen (Alpecin-Fenix) and an inspector from Intermarché – Wanty Gobert, they made sure that the escaped trio did not cycle together a hopeless big lead. Because it went fast: the first hour was covered 46.8 kilometers. Once it was clear that Ewan did not stand a chance, Lotto-Soudal decided to stop the hunt for the three escapees.

Anything else you should know?

The passage in Filottrano was impressive. The Giro passed between rows of people. It was there that ex-Giro winner Michele Scarponi lived and also died more than five years ago when he was hit by a car during training.

Juanpe López started his sixth day in the pink leader's jersey in Pescara. The Spaniard from Trek-Segafredo is also not completely unknown in West Flanders, because as a junior at the Fondación Contador he was still a guest rider with the Tieltse Renners seven years ago, the youth club that has since stopped, whose most famous youth rider was the regretted world champion junior time trial Igor Decraene. . In the first part of the stage, López also went to talk to Sam Oomen to whom he threw a water bottle in the ascent of the Blockhaus on Sunday out of sheer frustration after the leader fell. Purely for fun, Oomen pretended that he too would throw a drinking bottle at the Spaniard. So the incident is closed.