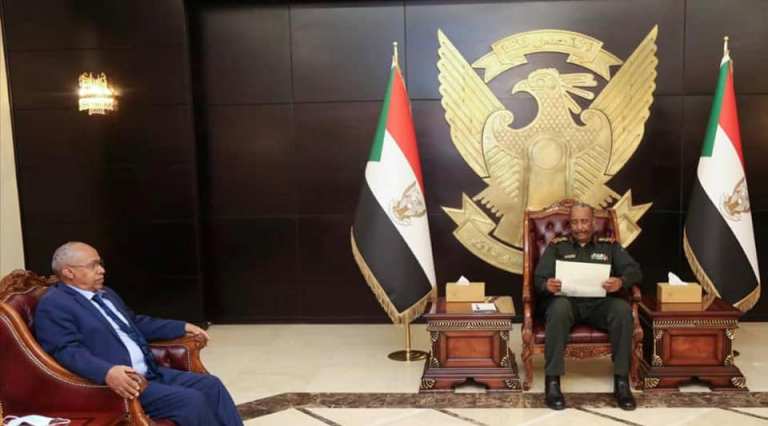 Al-Burhan reads a message from President Afwerki handed over by Eritrean Ambassador to Khartoum Ahmed Isa on May17, 2022

On Tuesday, May 17, 2022 (KHARTOUM) – Abdel Fattah al-Burhan, the head of the Sovereign Council, received a new message about an initiative to settle the political situation in Sudan.

Eritrean Foreign Minister Osman Saleh met al-Burhan twice, on April 16 and May 2, to discuss an initiative to resolve the political crisis in Sudan.

However, the Eritrean Ambassador to Sudan, Isa Ahmed Isa handed over a new message from his government to al-Burhan and his deputy Mohamed Hamdan Dagalo “Hemetti” about this initiative.

“The message of President Isaias focuses on strengthening bilateral ties as well as the contribution Eritrea could make, as a neighbouring country to Sudan, to resolve its internal problem and play a due role in the region,” reads a statement released on Shabait, the official website of the Eritrea government.

In Khartoum, the Sovereign Council issued a statement about the meeting saying that Ambassador Isa said that Sudan’s security is also the security of the African region.

According to the statement, the Eritrean diplomat added that “Sudan is able to solve its issues through broadening the base of participation among all components and conducting a serious and honest dialogue”.

Eritrea did not officially make public the content of its initiative but observers say it might deal with the situation in eastern Sudan as some Beja tribal factions reject a peace agreement negotiated with other groups.

The African Union, IGAD and the UN political mission to Sudan launched a joint process to end the Sudanese crisis, earlier last month.