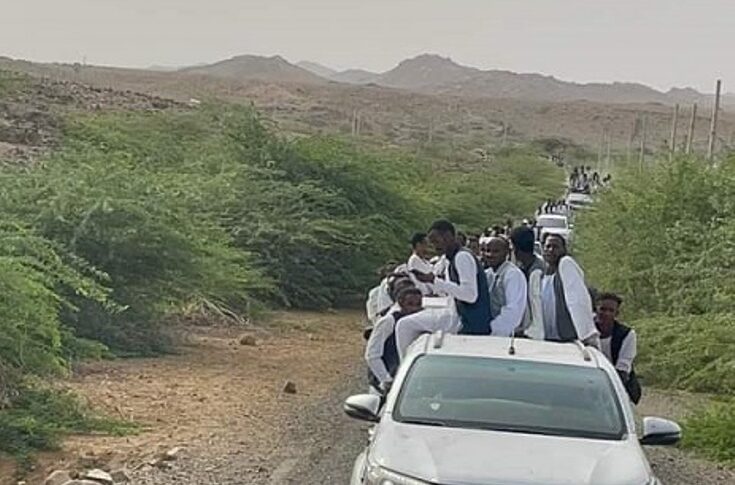 Eastern Sudan delegation prevente from crossing into Eritrea on August 4, 2022

KHARTOUM) – The Sudanese authorities Thursday prevented a  delegation of political and traditional leaders from crossing into neighbouring Eritrea.

The delegation was heading to Eritrea by road to take part in a forum sponsored by Eritrean President Isaias Afwerki to discuss tribal problems that affected the security situation in the eastern Sudan region.

However, the Eritrean government did not invite the eastern Sudan political groups signatory of the Juba Peace Agreement and members of the Sudanese Revolutionary Front.

The border police at al-Laffah crossing point of Kassala state said they did not receive formal instructions from the federal authorities to allow the 112 delegates to cross the border, as they had no visas on their passports.

The delegation included a number of political and tribal leaders and dignitaries, including Mohamed Al-Amin Terik, the Hadandawa tribal leader who led a protest movement in the region before the coup of October 2021. Also, was invited the former Presidential Assistant Musa Mohamed Ahmed of the East Front that signed a peace agreement in 2006 with the ousted regime, the leader of the Bani Amer tribes Ali Mahmoud Dakil, and the head of the Popular Front for Liberation and Justice, al-Amin Daoud, who is not part of Juba peace agreement.

A member of the delegation told Sudan Tribune that all the security authorities in the state were aware of their visit, but the police refused to permit our crossing the border because have no entry visas to Eritrea.

“Despite the insisting requests by the Asmara ambassador to let us cross, the officers stuck to their stance and we returned after spending 6 hours at the border,” he added.

For his part, Secretary General of the Popular Front for Liberation and Justice, Abdel-Wahab Jamil, blamed the foreign ministry for not informing the border police.

“The delegation wasn’t prevented but rather the passport police wasn’t notified by the authorities in Khartoum, while the Eritrean embassy informed the Sudanese Ministry of Foreign Affairs according to the fixed procedure in such situations,” Jamil told Sudan Tribune.

He pointed out that the Eritrean Embassy has no direct contact with the Sudanese government institutions but has to reach them through the foreign ministry in accordance with international diplomatic law.

However, he further said that the delegation will not hold a conference on eastern Sudan’s issues, but rather would tour Eritrean cities, and at the end of the visit they would meet with President Afwerki.

Asked about the failure to invite the eastern Sudan groups signatories of the Juba Peace Agreement, Jamil said they ignore why adding that the only organizer can respond to such a question.

“Ultimately, it is a social visit, not a conference to settle eastern Sudan issues, nor a new negotiating process requiring to invite everyone,” he stressed.

Eritrea had proposed to hold a peace conference for the tribal components in eastern Sudan, pointing to the successful process of 2006 that led to the signing of the eastern Sudan peace agreement in October 2006.

Jamil said that Eritrea would organize a conference on the eastern Sudan issues only if Khartoum gives the green.

He said that Eritrea, as a neighbouring country, is concerned with the security and stability of the region.

In addition, he denied any negative interference by the Eritrean president in the issue of the troubled region.

“As far as the Sudanese leadership is concerned with the stability of eastern Sudan, Eritrea is also concerned. Eastern Sudan’s security and stability will positively affect Eritrea and it will also be the first affected by any crisis there,” he said.
(ST)

.
Back to Dehai News