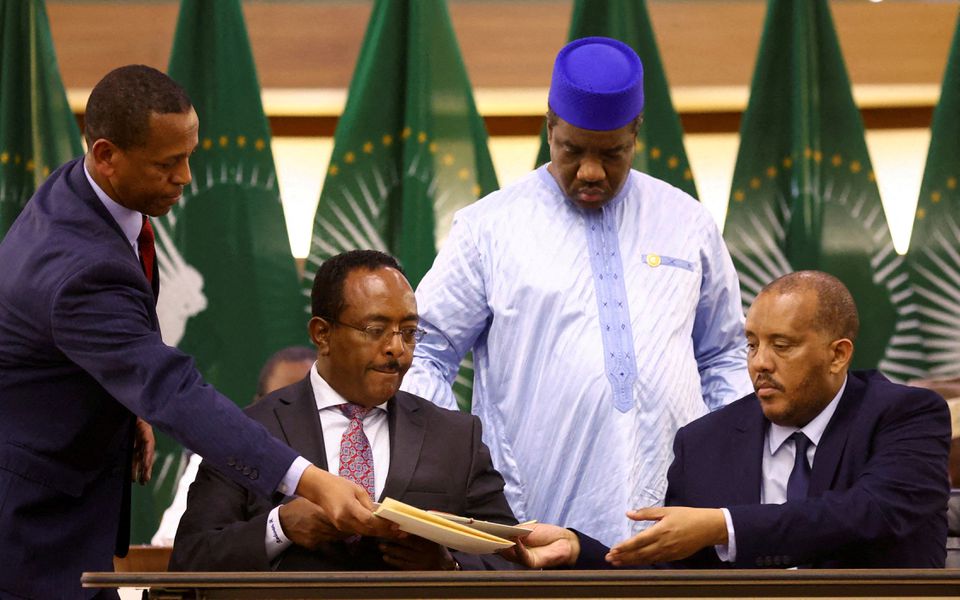 The people of Ethiopia are understandably relieved that a peace agreement now exists between their government and the TPLF. But aspects of the agreement may allow the U.S. to continue the conflict with the help of their TPLF proxies.

After two years of a bloody insurgency war that has claimed the lives of hundreds of thousands of Ethiopians, the Tigray People’s Liberation Front (TPLF) – a longtime U.S. proxy – appears to have failed at their regime change plans and have agreed to disarm their combatants. TPLF’s disarmament was first outlined in Pretoria on November 2, 2022 in what the Western media described as a “historic” peace deal. However, an implementation deal signed in Nairobi on November 12, 2022 and the rhetoric of the U.S., which participated in the negotiations, appears to be undermining the peace process.

The question that is now facing many Ethiopians and neighboring Eritrea, which was also attacked by the TPLF at the start of the war, is whether the TPLF will actually disarm. There are many indications since the initial deal was signed in Pretoria that TPLF leaders and supporters outside the country are setting the pretext for TPLF fighters to keep their weapons and go on the offensive at a more opportune time. Tigray-born Ethiopian journalists who have spoken to people inside the region say some combatants are refusing to disarm and are burying their weapons underground.

Ethiopians and Eritreans yearn for peace. Ethiopia’s negotiators have made some concessions that are unsettling to the majority of the people. As a case in point: they are allowing the TPLF to continue existing as a political group even after they started and plunged the region into war. However, many believe that peace is only possible if the group is disarmed.

Before the negotiations in South Africa, the general consensus among Ethiopian officials and even among known TPLF supporters in the West is that the Ethiopian Government had the military upper hand and that TPLF fighters in Tigray were, according to one of their key supporters, at a “point of collapse.” Since the TPLF in Tigray broke a five-month-long ceasefire and initiated a third offensive on August 24, the Ethiopian National Defense Forces had taken control of several key cities in the Tigray region and were closing in on the region’s capital of Mekelle.

These losses are said to be what drove TPLF representatives to the negotiation table. Some would argue the US rescued them. Representatives of the TPLF, which included spokesperson Getachew Reda, General Tsadkan Gebretensae and a handful of others, were flown to South Africa on US military planes, accompanied by U.S. Special Envoy for the Horn of Africa, Mike Hammer.

In the Pretoria agreement, the TPLF agreed among other things to “refrain from aiding and abetting, supporting, or collaborating with any armed or subversive groups in the country,” to “halt any conduct that undermines sovereignty… including unconstitutional correspondence and relations with foreign powers,” and “cease all attempts at bringing about an unconstitutional change of government.”

Both parties, the Government of the Federal Democratic Republic of Ethiopia and the Tigray People’s Liberation Front “agreed that Ethiopia has only one defense force” –  the Ethiopian National Defense Forces (ENDF). ENDF is the same force that was attacked in November 2020 by their own comrades, largely along ethnic lines and loyalties to TPLF - initiating the war Those attackers then became TPLF fighters with the goal of bringing about a violent regime change.

In Pretoria, the Ethiopian Government and the TPLF agreed “to finalize the overall disarmament of TPLF combatants including light weapons within 30 days of signing this agreement.” We are still within that 30-day period, but some additional stipulations to disarmament have many in the Horn doubting whether the TPLF will disarm.

Reactions to the Initial Deal

Even while many remained skeptical, the majority of Ethiopian and Eritrean voices appeared to be happy with what was referred to as the “peace deal” signed in Pretoria, South Africa. However, many TPLF supporters both inside Ethiopia and outside the country were furious that the TPLF representatives sent to Pretoria signed an agreement to disarm.

What happened next was that some activists began to say that the TPLF leaders who were at the negotiations in Pretoria did not represent them and that the TPLF doesn’t have combatants. The activists built on a narrative that was already in the digital ether, that said the group fighting in Tigray was known as Tigray Defense Forces (TDF).

A recent U.S. State Department briefing referred to the Pretoria November 2 agreement as that between the Ethiopian National Defense Force and the Tigray Defense Force. The agreement is written between “The Government of the Federal Democratic Republic of Ethiopia and the Tigray People’s Liberation Front” and says that Ethiopia has “only one defense force.”

The agreements don’t mention “Tigray Defense Forces” but rather TPLF combatants or Tigray Armed Combatants. “Tigray Defense Forces” is a term used largely by hardline supporters of the regime change war – and apparently also, by senior U.S. State Department officials. This is an attempt to sanitize TPLF and separate the group from those fighting on the ground.

There are many indications that the U.S. is undermining the peace process in Ethiopia. Immediately after the Permanent Cessation of Hostilities agreement was signed in Pretoria, U.S. Secretary of State Anthony Blinken and other U.S. officials referred to the deal simply as a “cessation of hostilities” and have never mentioned disarmament of TPLF fighters.

Even if the U.S. state officials don’t mention disarmament, for Ethiopians and Eritreans that have been devastated by a two-year war, a “permanent” cessation of hostilities is the only thing that makes the agreement different from the past, and the only one that will bring lasting peace. Twice in this war, there have been a cessation of hostilities and each ceasefire was broken by TPLF fighters.

What the State Department and other U.S. officials say and don’t say is important because of the long history between the U.S. and the Tigray People’s Liberation Front, which was an armed guerrilla group in Ethiopia formed in the 1970s and backed by the U.S. into power in 1991. This current war in many ways began in 2018 when the TPLF lost power. At the start of the war, the group’s leadership openly stated that their goal was to capture Ethiopia’s capital of Addis Ababa, and essentially force a regime change via the gun.

Nearly every step of the way, U.S. officials have tried to legitimize the venture, and force TPLF leaders back into power, at the expense of the lives of poor Ethiopians. The majority of Ethiopians and Eritreans see the U.S. as a dishonest broker of peace in this conflict, so much so that they didn’t trust the U.S. as an “observer” in the African Union-led negotiations. For many, the presence of the U.S. in the room dampens the hope for peace in the Horn of Africa.

The implementation deal that was signed in Nairobi on November 12, ten days after Pretoria, came as a surprise to many Ethiopians. It appeared to be a watered down version of the initial deal and one that gave the TPLF new leverage. The implementation document added conditions to the TPLF fighters’ disarmament saying that, “disarmament of heavy weapons will be done concurrently with the withdrawal of foreign and non-ENDF forces from the region.” While it wasn’t explicitly stated, the assumption from that line is that Amhara regional forces and Eritrean forces have to leave the region in question.

Neither Eritrea nor Ethiopia have said that there are Eritrean forces in Ethiopia, but it hasn’t stopped U.S. officials from centering Eritrea, when they talk about the peace agreements. In the same U.S. State Department briefing that referred to the propaganda term of “Tigray Defense Force,” a journalist from Reuters appears to tee up the senior State Department official with, “We understand that Eritrean soldiers as well as Amhara militias are still in Tigray and there is no sign they intend to withdraw, especially the Eritreans. What happens if Eritreans don’t withdraw?”

Again, Ethiopia and Eritrea have yet to say a word about the extent of Eritrea’s involvement at this stage. The State Department official responded in part with, “The United States always has at its disposal as a policy tool the prospect of sanctions, and we will not hesitate to deploy them if that should become necessary.”

Eritrea is no stranger to U.S. sanctions and Ethiopia is also facing punitive economic measures from the U.S., while it is fighting to defend its sovereignty from a U.S. proxy that was in power for 27 years. The leaders of that proxy, the TPLF, have yet to face any sanctions. In fact, after starting a devastating war that has ruined the lives of millions, they were given a lifeline and flown out of the conflict area on U.S. military planes. So, when the U.S. threatens sanctions to those who don’t abide by the peace deal, it is evident that the threats are only directed at one side.

The U.S. could be cultivating the agreements signed for peace, but instead, officials are using the country’s influence to encourage armed insurgents and their supporters – while punishing ordinary Ethiopians and Eritreans through destructive sanctions that are making life more difficult in the Horn of Africa.

Hermela Aregawi is an independent Ethiopian-American journalist with more than a decade of experience reporting for mainstream media outlets such as CBS-LA, Al Jazeera America and Current TV. She founded Mela Media, a nonprofit media company, in 2021 to report news about Africa from the perspective of the people. She is also the founder of Eyes on Africa News at www.EOANews.com .