TPLF Must Learn from Its Mistakes and Start Working for the Future of Tigray. 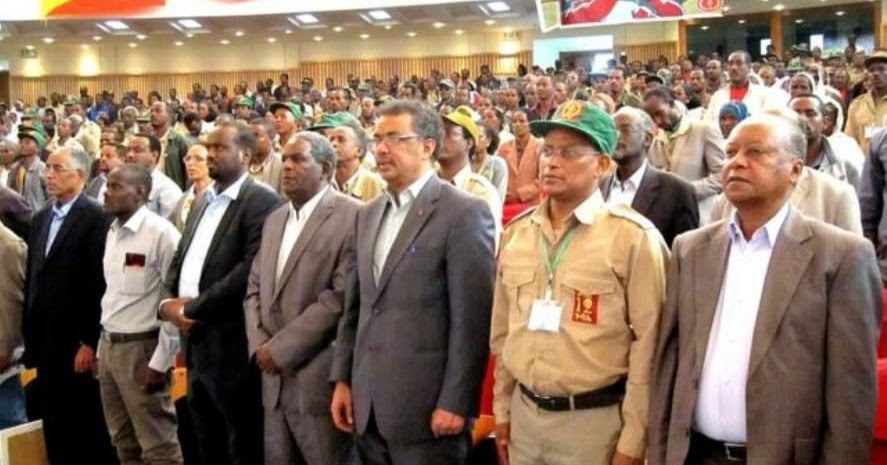 “Despite failure, only the person trying to learn from mistakes can advance in life.”
― Prof Basu Mali, Motivational Speaker, NFLP (USA).

Much has been written and said about the deep wound the TPLF minority mafia clique inflicted on the people of Ethiopia and Eritrea in the past 27 years. Since TPLF, carried on the back of EPLF’s Tanks, controlled Ethiopia and assumed power in the highest offices of the Ethiopian government, it has committed a lot of mistakes that eventually led to its downfall. Accordingly, the surprise should not be why TPLF rule in Ethiopia ended in such a miserable way. Rather it should be why it stayed in power for so long in the first place. As history tells us, let alone TPLF, which is wicked, sick and narrow- minded minority group of day light looters, even the good and well-intentioned governments have a shelf life. Therefore, in this article I will try to revise some of the strategic mistakes TPLF has committed so far and argue as to why TPLF must learn from its mistakes and start working for the future of the People of Tigray before it is too late.

TPLF’s Twin Mentality and its Grave Danger to the Unity of Ethiopia.

To find a way out from the quagmire it is in, recently, the TPLF minority group has been organizing a lot of back to back meetings in Mekelle. In one of the recent meetings, the former ex-TPLF leaders, Argawi Berhe and Gidey Zeratsion, were present. Aregawi Berhe, in his presentation, testified that the initial TPLF program was to overthrow the then Ethiopian military regime and ultimately establish a democratic Ethiopia that includes Ethiopians from all ethnic groups and sort of life. However, according to Mr. Berhe, few years after the start of the struggle, Meles and his propaganda chief, Abay Tsehaye, introduced a different program that advocates for the independence of Tigray. He explained that although the latter was opposed by the majority of the TPLF leadership and fighters, and ultimately was discarded from the TPLF program, Meles and his propaganda chief, Abay Tsehaye, did not stop teaching it at the TPLF cadre school.

Although Mr. Berhe left the struggle to Sudan and eventually to Europe, the twin mentality was alive well and continued to confuse the TPLF fighters until the liberation of Mekelle. It was because of such confusing Twin mentality agenda that the TPLF army, that was marching to overthrow the Dergue military regime, started to succumb to the pressure of war and fled from the Kobo front back to Mekelle, arguing that the liberation of Tigray was fulfilled and there was no need to continue to Addis Ababa. The front was sustained by the EPLF army units that were supporting the TPLF and eventually Meles called a meeting of all deserter TPLF fighters in MeKelle and was able to convince them to return to Kobo and continue fighting to Addis. After the Kobo incident any person with a healthy mind would think that TPLF would drop the Twin Mentality agenda and would commit to one Ethiopia. Unfortunately, even after TPLF, with the help of EPLF, managed to control Addis Ababa, it did not drop the Twin mentality agenda. In fact, sitting at the helm of power in Addis Ababa, TPLF was working hard for the Tigray republic agenda, resulting in the inclusion of article 39 in the new Ethiopian constitution, that gives states the right up to cessation from Ethiopia.

Thus, it is heart wrenching and, in some cases, surprising that after 27 years of mayhem and looting in Ethiopia, Getachew Reda and Aregawi Berhe were debating on the issue of TPLF’s Twin Mentality in the TPLF meeting held in Mekelle. Mr. Berhe clearly understood the danger of Twin Mentality and urged the TPLF leaders to choose one: be an Ethiopian or declare an independence. To the contrary Mr. Reda advocated for the continuation of the Twin Mentality. The lesson is the debate between the two people clearly indicated that TPLF has not learned from its past mistakes. Borrowing from professor Basu’s quote, If it wants to advance in life, despite failure, TPLF needs to learn from its mistakes and start working for the future of the people of Tigray.
Obviously Twin Mentality is not the way to go.

After sixteen years of back and forth, the new Abiy Ahmed government has fully accepted the Alger’s Agreement and decided to implement it without pre-conditions. However, after the official signing of the peace agreement in Asmara, angered by exclusion, not only TPLF has not been supportive, it is staging a lot of negative drama that could damage the peace process. One of the dramas was setting a precondition called “people to people relations”. Many Ethiopians, Eritreans and for that matter Prime Minister Abiy Ahmed does not understand what TPLF’s people to people relationship mantra means.

According to TPLF, if the people in both sides of the border able to meet, they can demarcate the border and ultimately Eritrea and Ethiopia will be the first in the world to have a more than 1000 km border demarcated by villagers. I am not sure if any person in his right mind falls to such nonsense talking point. However, it does not take to be a genius to find out the desperation behind it. It is obvious that TPLF is fighting for its survival in Tigray and looking for a way to engage with Eritreans. The rejected minority clique is looking for something that will help it to show to the people of Amhara and Oromia that its relationship with Eritrea is intact and in time of danger unconditional support is available. That is why TPLF is lining up Eritreans from the refugee camps, like animals, to show that it still has a relationship with Eritreans and is healthy.

The play book is the same, repetitive and tiresome. Remember, during the high point of the uprising against TPLF in Ethiopia, to anger the Oromos and Amahars, TPLF ordered the Somalis and Afar regional leaders to travel as far as Mekelle and give a hefty present to the Tigreans who fled from Gonder to Tigray. Now that the Somalis and Afars are perfectly happy that TPLF is gone and have no reason to sit with TPLF in mourning, TPLF is working hard to replace them by Eritreans from Refugee camps. The question is, will such drama lead to peace between Tigray and Eritrea? Didn’t TPLF force Eritrean refugees to line up in front of the African Union to condemn the government of Eritrea before? What was the outcome? Any lesson from that action?

TPLF’s Fixation with Tigray Becoming Part of Eritrea is a Daylight Dream.

When signs start to emerge that the TPLF minority rule in Ethiopia was ending, it was not a coincidence for the TPLF propaganda machine, Aiga forum, to work in full force to entertain the Agazian agenda. The Agazian agenda is a branch of TPLF thinking aimed at establishing a Tigray-Tigrni state in the horn of Africa. That state will include the current state of Eritrea and Tigrai Killil from Ethiopia. Now you can see how confused and ignorant the TPLF leaders are. The EPLF that advised them to work for one Ethiopia long time ago being in power in Eritrea and the people of Eritrea who repulsed TPLF’s successive invasions and sacrificed their beloved sons and daughters would fall to the TPLF Agazian nonsense is not only foolish but also goes in line with TPLF’s failure to learn from previous mistakes. Anyway, the lesson is TPLF dreamed to be part of Eritrea either by invasion or propaganda and fortunately both missions failed miserably. The recent people to people mantra and sending innocent people across the heavily mined and fortified bankers shows only TPLF’s desperation.

The Road to Tigray Republic is closed.

Currently, except for the TPLF clique, the whole people of Tigrai are in a soul-searching mode. To be honest many of them do not know how a TPLF regime that pretended to control everything in Ethiopia fell apart in a few months and retreated to Tigray, leaving Tigreans in danger. They are in disbelief and confused. Again, we can easily find the answer to this question in the TPLF’s Twin Mentality agenda. In preparation for the eventual independence of Tigray, TPLF has looted Ethiopia not only its resources but also its fertile land. The looting of Ethiopia by the TPLF minority regime through EFFORT and annexation of the fertile land Wolkaite Tsegede from Gonder are some of the major mistakes TPLF has committed in Ethiopia. Had TPLF understood it’s future was tied to the future of Ethiopia, it would have not been gone in a looting spree of resources and fertile land. However, as Abay Tsehaye, in his recent Shire meeting put it, an independent Tigray is elusive when Eritrea which opposes the idea vehemently is on the back and the Amhara’s who are asking for Wolkaite Tsegede to be returned to them are on the front. Here you have.

TPLF Rule in Ethiopia is Over for Ever.

The Ethiopians have endured torture, killing and theft under the TPLF rule for 27 years. The Tigrean Minority group Mafia has looted Ethiopia like there was no any other day. It turned Ethiopia to a country where one junior security official could be sued for a corruption of 70 million Ethiopian Birr and a TPLF affiliated Killil chairman for stealing 16 million Ethiopian birr from the poor Somali region people of Ethiopia. If one junior security official and another TPLF affiliated Killil chairman could be sued for stealing such big amount of money, it dos not take to be a rocket scientist to know how much money could have been embezzled from the many “borrow and steal” China supported projects such as the sugar corporation, the railway project, and industry parks. This is excluding the biggest dam project in Ethiopia which is solely controlled by the TPLF affiliated EFFERT companies. Instead of thinking about the future of the people of Tigray in Ethiopia, TPLF decided to milk the cow until it dries up and then planned to declare the republic of Tigray. Again, not only the looting did not help the people of Tigray, but also it failed to materialize the Tigray republic. It was a total failure. Accordingly, Ethiopians do not want to see anyone affiliated with the TPLF in power again. Unfortunately, it the short term it may negatively affect the people of Tigray as well.

The current challenge of the people of Tigray is not finding a way to get out of the quagmire TPLF have immersed them into. It is the challenge that TPLF is an animal that does not learn from its mistakes. If it were a normal leadership, it could have learned from its future mistakes and work hard to correct them. For instance, the current people to people relationship TPLF’s talking point not only is nonsense but will prolong the peaceful resolution of the problems of the Eritrean and Ethiopian people, they have endured for the last 27 years. The solution is to support the acceptance of the Alger’s agreement and EEBC decision by the federal government and work hard to solve the border problem between Ethiopia and Eritrea. If TPLF believes the people to people relationship will help it to recover its relationship with Eritrea, get a guarantee for its Republic or Tigray project or challenge the current prime minster in Ethiopia, it will be another fatal mistake. Moreover, the future of the people of Tigray is with the people of Ethiopia and the dream of greater Tigray or Tigray-Tigrini needs to be buried for once and for all.

Peace to the People of Ethiopia and Eritrea.
Source: TesfaNews
Back to Dehai