Biniam Girmay: Worlds silver is for Eritrea and for Africa | Cyclingnews

Biniam Girmay: Worlds silver is for Eritrea and for Africa Biniam Girmay hailed a landmark moment for Eritrea and all of Africa after winning the silver medal in the U23 men's road race at the UCI Road World Championships.

The rising star burst clear of a reduced bunch to place second in Leuven, just a couple of seconds after solo winner Filippo Baroncini. In doing so, he made history, becoming the first Eritrean and the first black African to win a medal at the Road World Championships.

"For me, for my nation, also for Africa, this means a lot," Girmay said as his section of the post-race press conference outlasted that of the world champion to his left.

"I'm really happy. I'm really proud of my nation, so I say congrats to all Eritreans and also to all Africans." 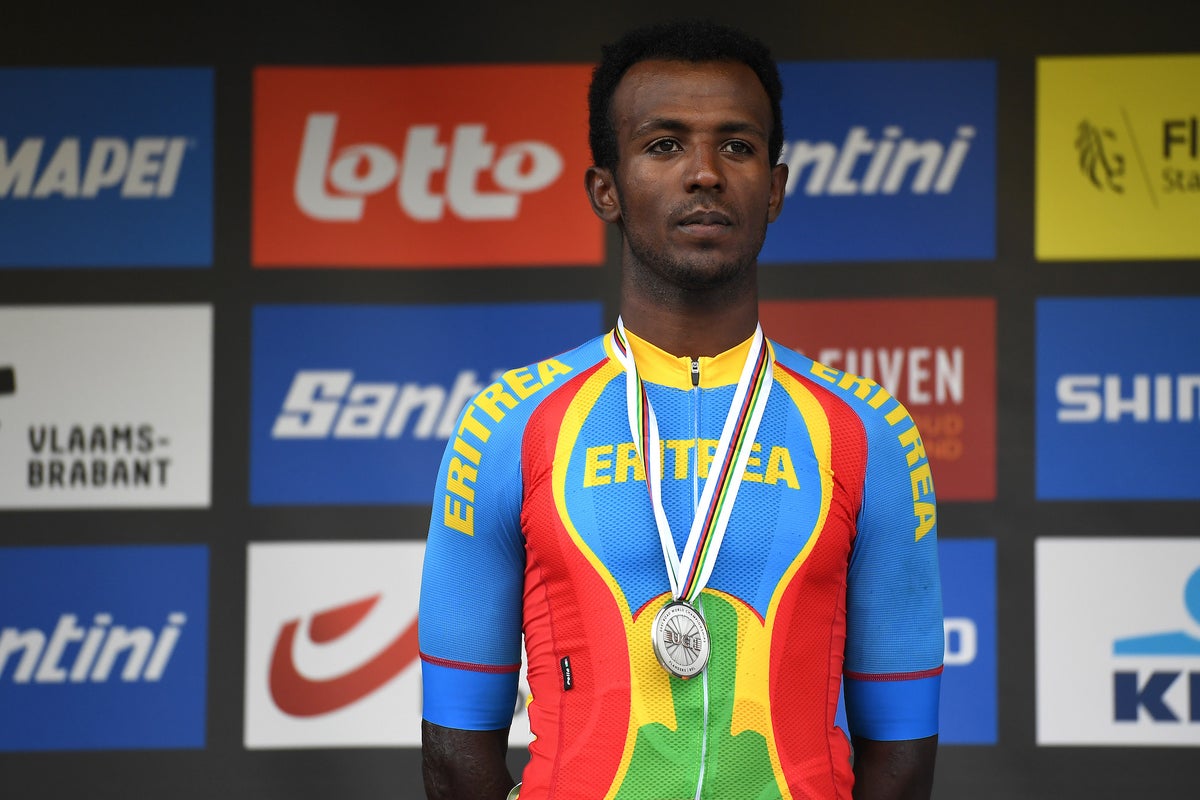 Silver medalist Biniam Girmay of Eritrea during the medal ceremony after the 94th UCI Road World Championships 2021 Men U23 Road Race (Image credit: Getty Images Sport)
Girmay nodded his head sharply as he crossed the line, which at first looked like a show of frustration. He had been the fastest in the reduced bunch, only thwarted by a solo attacker, but it soon became clear that there wasn't a hint of disappointment.

He sank to the tarmac and was mobbed by his teammates and staff, and could no doubt hear - if not see - the flag-laden Eritrean fans in Leuven.

"Yesterday I called my family, and they told me to remember when I was a kid," he revealed. "My father said to me 'hopefully you will become one of the biggest riders in all the world, you will be world champion'. So I was on the phone to my father and my whole family, and they said 'for sure you can do it and take a medal'.

"I say thank you for all my family. They supported me. They give me really good motivation, every single day. When I was starting my sprint, I was a bit nervous but I was also thinking just to get one of the medals. Not to win - just to finish top three and I did it. I am happy with my place."

Girmay has been touted as a big talent but his journey to the top of the sport is far from straightforward. Cycling is popular in Eritrea but in terms of pathways to the professional ranks, it lags far behind cycling's European heartlands.

"I'm from the capital city Asmara. That's the cycling zone in Eritrea," Girmay said, explaining his roots. "Every Sunday there's a race, and all the people who like cycling give you a lot of advice. I started when I was 12 years old, at school. I rode mountain bike but then I also started road racing when I was 15."

Girmay's big break was an invite to the UCI's World Cycling Centre, to which he says he owes a big debt of gratitude. The WCC is an initiative of the sport's governing body to develop riders from backgrounds that may ordinarily prevent them from reaching the pro ranks, housing them in Switzerland and offering structured training and access to races.

"I raced a lot of races with them and gained a lot of good experience.  When you're young, you come to Europe and you see the peloton - big peloton - and a lot of tactics. Mentally and physically, I grew at the World Cycling Centre."After I won the African Continental Championships - in the TT and the road race - the UCI invited me, so I joined them in 2018 and stayed until the end of 2019. It was really important - one of the most important things," Girmay said.

"It means a lot to me because I went to Europe in 2018 and every year, with every step, every new experience, I learn a lot. It has worked today."

Girmay then signed his first professional contract with the French Delko team for 2020, and he immediately made his mark, winning two stages of the Tropicale Amissa Bongo in Gabon. He went on to finish runner-up behind Giulio Ciccone at Trofeo Laigueglia, then to Loic Vliegen at Tour du Doubs, as well as picking up four podiums at the Tour du Rwanda and fourth at the Giro della Toscana.

Interest rocketed, WorldTour teams started circling, and, as Delko found themselves in financial and administrative trouble this year, a mid-season transfer to WorldTour outfit Intermarché-Wanty-Gobert Matériaux was organised for the start of August. He quickly set about winning the GP Besançon Doubs - his first professional victory on European soil.

"When I joined this team I was super happy. I think it's a good team. It's not only a team but a family," he said. "I also say thank you to them for giving me the opportunity and supporting me the past few months. I joined halfway through the season but they gave me the chance immediately to sprint for the win."

Girmay signed a long-term deal with the Belgian team and recently relocated to Lucca, Italy, where there's a sizeable contingent of Eritrean riders. He signed through 2024 - a sign of how highly rated he is - in which time he hopes to hone his skills as a versatile sprinter and start winning bigger and bigger races.

"For now, I'm really looking at the Classics, also some hilly races with a sprint," he said. "This is my best capacity so I'm working for this to be faster in the bunch sprints and on the small uphills. I also want to show the next few years that I can be one of the big riders.

"When I was little, I liked sprinters. I wouldn't say he's my hero, but I like Peter Sagan, not only for his cycling but also outside of cycling. He's really funny and easy-going."

The future appears very bright indeed for Girmay but he is also aware of the potential impact of his silver medal not just in the next few years, or even the rest of his career, but for decades and generations to come.

"In Eritrea our future is bright," he said. "We have really good potential. It's not just from the last years, it's longer.

"We will get more experience, and progress every day mentally and physically. There is a really good future, I think."

Biniam Girmay: Worlds silver is for Eritrea and for Africa | Cyclingnews