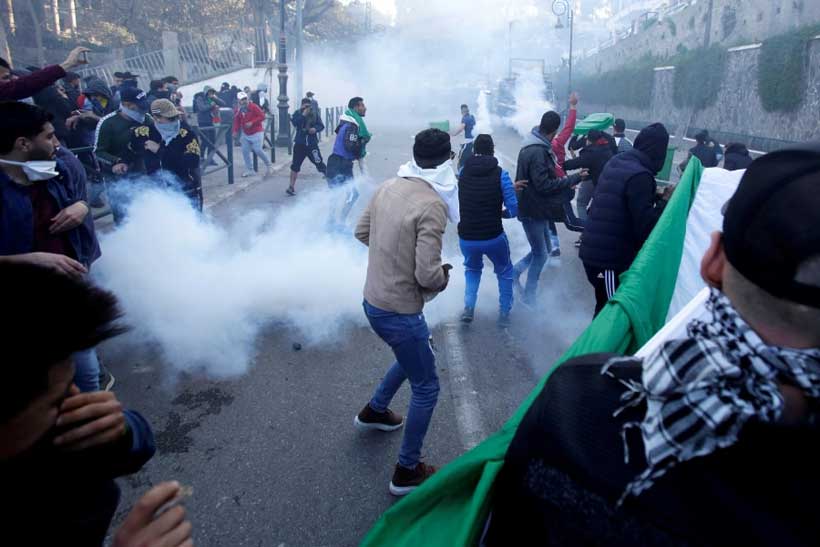 Demonstrators in Sudan, Algeria and nations beyond the Middle East such as Pakistan and Russia are applying lessons learnt from the 2011 popular Arab revolts as the Sudanese military uses an apparent Saudi-United Arab Emirates template to crack down.

This week’s crackdown in the Sudanese capital of Khartoum, in which reportedly some 100 people were killed as of this writing and hundreds wounded, has all the tell-tale signs of the Saudi-UAE assisted repression of a 2011 revolt in Bahrain.

The deaths have also sparked comparisons to a crackdown on protesters on a Cairo square in 2013 by Saudi-UAE-backed general-turned president Abdel Fattah al-Sisi that left up to 1,000 people dead.

The crackdown, despite an apology by Lieutenant General Abdel Fattah al-Burhan, the head of Sudan’s Transitional Military Council (TMC), like in Bahrain, involved not only the shooting of protesters but also attacks on hospitals treating the wounded and the beating up of medical staff.

General Al-Burhan and the TMC took power in April after months of protests forced president Omar al-Bashir to resign after 26 years in office.

Protesters and analysts noted that the crackdown came on the heels of visits to the UAE, Saudi Arabia and Egypt by General Al-Burhan. It also followed Saudi Arabia and the UAE pledging US$3 billion to help Sudan weather the crisis.

The US State Department signalled its belief that Gulf states may have inspired the violence by describing it as a “brutal crackdown” and stressing to Saudi deputy defense minister Khalid bin Salman “the importance of a transition from the Transitional Military Council to a civilian-led government in accordance with the will of the Sudanese people.”

The degree to which Sudanese protesters are willing to implement lessons learnt from the 2011 revolts will be determined by their willingness and ability to sustain their protests in the face of violence.

The opposition this week rejected an offer by General Al-Burhan to reopen negotiations and hold elections within nine months.

“We believe that the matter is now in the hands of the Sudanese people. This regime will fall, no matter what,” said Khalid Omar Yousef, a leader of the Declaration of Freedom and Change Forces (DFCF), an alliance of opposition groups.

The protesters, like their counterparts in Algeria who in April forced the resignation of president Abdulaziz Bouteflika, have vowed to sustain their protests until their demand has been met that the old regime has been dismantled and replaced by civilian rule.

Protesters in 2011 that toppled the leaders of Egypt, Tunisia, Libya and Yemen declared victory and surrendered the street once they had forced their leaders to step down.

The surrender helped successful efforts to rollback the revolts’ success in three of the four countries with Tunisia, where civilian rule and democracy prevailed, constituting the only exception.

The years between the rollback of the achievements of the revolts and the eruption of mass anti-government demonstrations in Algeria and Sudan were pockmarked by small-scale, issue-oriented protests across the Middle East and North Africa.

A military squashing of the Sudanese protests, if Bahrain is the model, could introduce not only a period of sustained small-scale protests but also of low-level violence.

The threat of sustained instability in Sudan is enhanced by the fact that this week’s crackdown was carried out by the feared Rapid Support Forces (RSF), paramilitaries accused of systematic human rights abuses during the war in Darfur.

The force is led by General Mohamed Hamdan Dagalo, known as Hemedti, who also serves as deputy head of the TMC and, like General Al-Burhan, has close ties to the UAE and Saudi Arabia.

The Middle Eastern and North African model of smaller-scale, issue-oriented protests has been replicated in Pakistan and Russia with the government in Moscow adopting a more conciliatory tone than the Pakistani military.

The military appears determined to put an end to sustained peaceful protests by the Pashtun Tahafuz Movement (PTM) or Pashtun Protection Movement, an ethnic rights group that is demanding that security forces be held accountable for extrajudicial killings and other injustices.

Trying to stop a rights demonstration in the troubled region of Waziristan, security forces on Sunday killed at least eight people and detained Ali Wazir, one of the movement’s leaders and a member of parliament.

PTM leaders, like protesters in Sudan, Algeria and Russia, are increasingly less intimidated by security force violence or dire warnings that they risk exposing their country to the fate of Libya, Syria or Yemen, that have been wracked by civil war and foreign military intervention since the 2011 protests.

“PTM members are nonviolent but prepared to die to speak the truth — and our security forces have no answer,” said Afrasiab Khattak, a retired politician and commentator.

“Rallies and protests are now occurring with increasing frequency, primarily because Russians no longer care if the authorities refuse to sanction a given gathering, making it and participation in it illegal.

Indeed, protesters are becoming radicalized. They now refuse to buckle under pressure, and they are willing to take to the streets over issues as non-political as the environment and as local as the construction of a cathedral,” said Russian journalist Andrey Pertsev.

For now, Russia compared to Sudan, Pakistan and Algeria is the exception. Authorities, apparently so far unwilling to use violence, have sought to accommodate protesters and in some cases have met their demands.

Unlike the 2011 Arab protests that often started in second and third tier cities before going nationwide, a well-placed source in Moscow said the Russian protests were unlikely to spread to the Russian capital where security was far tighter.

If there is one fundamental lesson to be learnt, it is that the most recent wave of protests signals that an era of dissent and defiance that started in 2011 is far from over.

Each wave takes in the lessons of the mistakes of its predecessor. Violence, repression and ever starker authoritarianism delays the process but does little to end it.

Speaking in the wake of the crackdown, Mohammed Yousef al-Mustafa, a spokesman for the Sudanese Professionals Association, which has spearheaded the protests, asserted that “we have no choice but to continue our protests and civil disobedience until the fall of the military council.”