TheConversation.com: Why Sudan’s deadly crackdown on protesters could escalate in coming weeks

In this Sunday, June 9, 2019 frame grab from Sudan TV, Lt. Gen. Jamaleddine Omar, from the ruling military council, speaks on a broadcast. SUDAN TV via AP

In addition to brutally beating the pro-democracy protesters, government troops also fired on the demonstrators. Early numbers suggest that at least 61 people died during the week, though that number may grow in the coming days.

The deadly violence occurred after months of citizen protests against the violent and repressive rule of the longtime ruler of Sudan, President Omar al-Bashir. Sudan’s military removed him from office on April 11.

Soon after the coup, talks began about the transition of power to civilian rule. There were high hopes among democracy advocates that a new civilian government would soon take control of the state.

As scholars of armed conflict, we believe that such reforms are likely to be put on hold following this episode of government repression. The findings from our forthcoming research on coups around the world suggest that this state-sponsored brutality may just be the start of a more deadly crackdown.

Since coming to power through a military coup in 1989, al-Bashir ruled Sudan with an iron fist. The government routinely engaged in widespread atrocities as a way to cripple dissent.

This violence was largely directed at the disenfranchised southern and western portions of the country, in Darfur and what is now South Sudan. Political power is largely concentrated in the areas surrounding Khartoum.

After years of international economic sanctions in response to those human rights abuses, in 2018 large groups of citizens in Khartoum, as well as in municipalities surrounding Khartoum, began to demonstrate and call for al-Bashir to step down from power.

Though the military initially responded by violently suppressing the protests, the Sudanese Army finally acquiesced to popular demands and arrested al-Bashir.

This recent escalation of violence is not the first instance of indiscriminate violence by the new military junta in Sudan. On May 15, soon after the April coup, military forces opened fire on protesters in Khartoum. 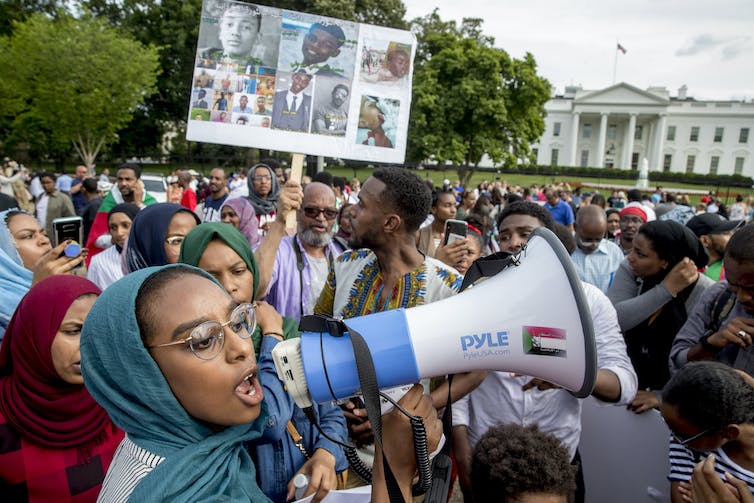 Our research suggests that there may be greater violence against Sudanese civilians in the coming weeks.

We study when and where governments respond to threats through the use of state-sponsored violence – specifically, killings by the government. Potential threats to government control may be external, such as rebel attacks, or they may be internal, such as military coups.

While coups themselves are rare events, the threat of a coup, and leaders’ behavior to avoid it, are more common in fragile states. Leaders who are concerned about being unseated may purge the capital of perceived dissidents as the possibility of a coup emerges.

This was the case in the 1960s and the early 1980s in Guatemala, as the Guatemalan government killed thousands of suspected dissidents when they believed the risk of a coup was greatest. Similarly, the Derg regime in Ethiopia killed over 10,000 people in the late 1970s, when the government felt threatened by the growing terrorist campaign inside Addis Ababa.

The risk of a coup

With data from the Uppsala Conflict Data Program, we can identify where governments around the world have used force against civilians and also where rebel activity took place between 1989 and 2018.

We also used machine learning methods, including those employed by CoupCast, the premier scientific model for forecasting coups.

With this, we could predict the risk of a coup occurring, relative to other countries.

Scholars have found that the risk of coups is tied to major shifts in economic and political stability. Weak civil society, unregulated political competition and economic downturns all contribute to a rise in the potential risk of a coup. Coups often happen in bursts, so the time since the last coup matters, too.

As the estimated risk of a military coup rises, our models show a significant increase in government-sponsored violence. This is particularly true in parts of the country close to the capital.

When the risk of a coup is high, governments engage in more targeted killings of civilians in capital cities, as well as the surrounding district. Within the capital, a 1% increase in coup risk results in 20 additional civilian deaths by government forces a year.

Additionally, nearly all civilian deaths within the capital take place in countries in the top 25% of coup risk.

What this means for Sudan

The risk of a coup within Sudan has increased since al-Bashir’s forced exit from office, as compared to the days leading up to his ouster.

This is largely because past coups increase the risk of future coups, a fact that is not lost on the perpetrators of coups d’état.

Less than two months since the removal of al-Bashir, pro-democracy advocates within Sudan have called on the new regime to hand over power to a civilian government. Negotiations on a possible transitional power-sharing government have ended with no agreement, and demonstrators have increased their demands for the government to hand over power.

Our models suggest that, as the perceived internal threat grows within Sudan, protesters – particularly those in the capital – are at risk of being brutally suppressed, with violence only escalating.

The civilians killed on June 3 may just be the start of a more violent campaign.