(Al Jazeera) 'We are in a fire': Libya's detained refugees trapped by conflict

'We are in a fire': Libya's detained refugees trapped by conflict

Detainees at detention centre on the outskirts of Tripoli live in fear amid intense clashes for control of the capital. 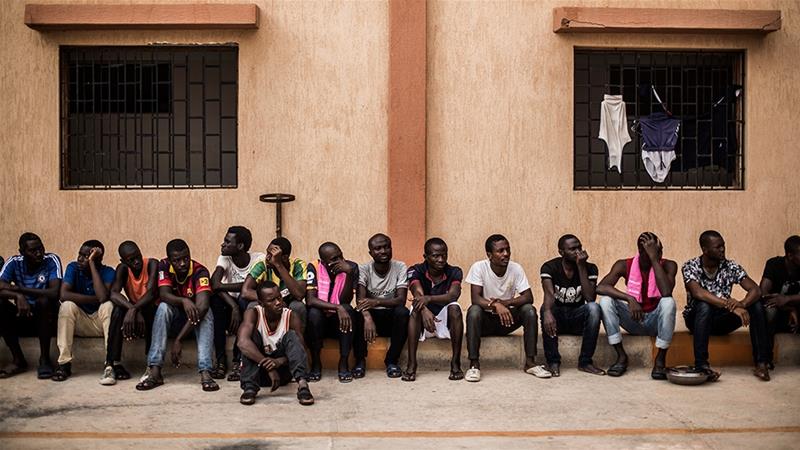 A 2016 photo showing migrants at the courtyard of a detention centre in Libya [File: Manu Brabo/AP]
Refugees and migrants trapped on the front line of fierce fighting in Libya's capital, Tripoli, are pleading to be rescued from the war-torn country while being "surrounded by heavy weapons and militants".

Hit by food and water shortages, detainees at the Qasr bin Ghashir detention centre on the southern outskirts of Tripoli, told Al Jazeera they were "abandoned" on Saturday by fleeing guards, who allegedly told the estimated 728 people being held at the facility to fend for themselves.

The refugees and migrants used hidden phones to communicate and requested that their names not be published.

"[There are] no words to describe the fear of the women and children," an Eritrean male detainee said on Saturday.

"We are afraid of [the] noise... fired from the air and the weapons. I feel that we are abandoned to our fate."

Tripoli's southern outskirts have been engulfed by fighting since renegade General Khalifa Haftar's eastern forces launched an assault on the capital earlier this month in a bid to wrestle control of the city from Libya's internationally recognised Government of National Accord (GNA).

The showdown threatens to further destabilise war-wracked Libya, which splintered into a patchwork of rival power bases following the overthrow of former leader Muammar Gaddafi in 2011.

At least 121 people have been killed and 561 wounded since Haftar's self-styled Libyan National Army (LNA) started its offensive on April 4, according to the World Health Organization (WHO).

Both sides have repeatedly carried out air raids and accuse each other of targeting civilians.

The United Nations Office for the Coordination of Humanitarian Affairs (UNOCHA), for its part, estimates more than 15,000 people have been displaced so far, with a "significant number" of others stuck in live conflict zones.

Amid the fighting, refugees and migrants locked up in detention centres throughout the capital, many of whom fled war and persecution in countries including Eritrea, Somalia and Sudan, are warning that their lives are at risk.

"We find ourselves in a fire," a 15-year-old detainee at Qasr bin Ghashir told Al Jazeera.

Others held at the centre described the abject conditions they were subject to, including a week-long stint without electricity and working water pumps.

One detainee in her 30s, who alleged the centre's manager assaulted her, also said they had gone more t

Elsewhere in the capital, refugees and migrants held at the Abu Salim detention centre also said they could "hear the noise of weapons" and needed protection.

"At this time, we want quick evacuation," said one detainee at Abu Salim, which sits about 20km north of Qasr bin Ghashir.

"We've stayed years with much torture and suffering, we don't have any resistance for anything. We are (under) deep pressure and stressed … People are very angry and afraid."

'Take us from Libya, please'

Tripoli's detention centres are formally under the control of the GNA's Department for Combatting Illegal Migration (DCIM), though many are actually run by militias.

The majority of the approximately 6,000 people held in the facilities were intercepted on the Mediterranean Sea and brought back to the North African country after trying to reach Europe as part of a two-year agreement under which which the European Union supports the Libyan coastguard with funds, ships and training, in return for carrying out interceptions and rescues.

In a statement to Al Jazeera, an EU spokesperson said the bloc's authorities were "closely monitoring the situation in Libya" from a "political, security and humanitarian point of view" though they could not comment on Qasr bin Ghashir specifically.

DCIM, for its part, did not respond to a request for comment.

The UN, however, continues to reiterate that Libya is not a safe country for refugees and migrants to return.

Amid the ongoing conflict, the organisation's human rights chief, Michelle Bachelet, warned last week of the need to "ensure protection of extremely vulnerable civilians", including refugees and migrants who may be living "under significant peril".

Bachelet also called for authorities to ensure that prisons and detention centres are not abandoned, and for all parties to guarantee that the treatment of detainees is in line with international law.

In an apparent move to safeguard the refugees and migrants being held near the capital, Libyan authorities attempted last week to move detainees at Qasr bin Ghashir to another detention centre in Zintan, nearly 170km southwest of Tripoli.

But those being held in Qasr bin Ghashir refused to leave, arguing the solution is not a move elsewhere in Libya but rather a rescue from the country altogether.

"All Libya [is a] war zone," an Eritrean detainee told Al Jazeera.

"Take us from Libya, please. Where is humanity and where is human rights," the detainee asked.