AfricanArguments.org: Sudan in transition: Two broad factors that will determine what happens now 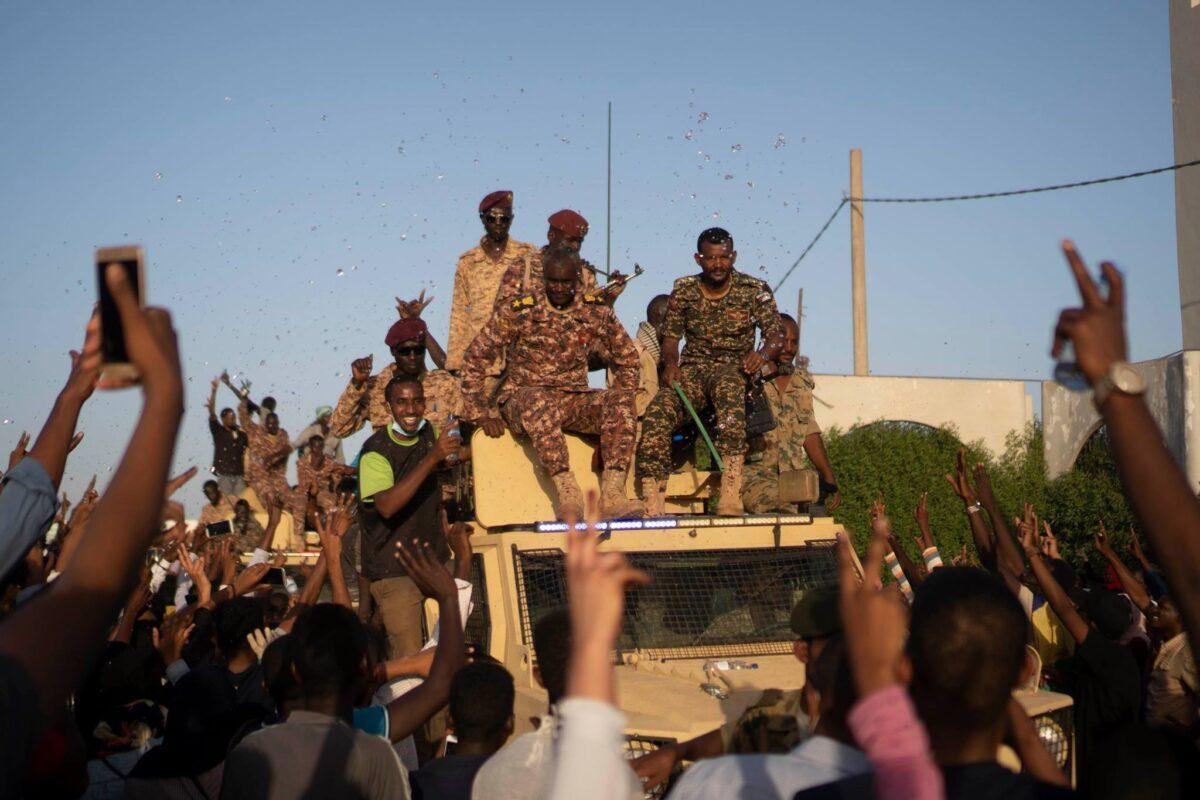 Many rank-and-file soldiers have vowed to protect the protesters against attacks as the Sudan transition continues. Credit: M.Saleh.

The establishment of a new Transitional Military Council (TMC), now fronted by Lieutenant-General Abdel-Fattah Burhan, has been described by some as a “decorative coup” featuring the same strongmen and pathologies as its precursor. Its proposal for a two-year transition amounts to “rule via extra-constitutional fiat”, according to Crisis Group. It is an expression of “Bashir-ism” without al-Bashir, in the words of Alex de Waal on African Arguments, that reflects the resilience of Sudan’s profligate oligarchy.

This outcome, however, is not yet definitive. Pessimistic analogies with Egypt after the Arab Spring are premature. Instead, as protesters return to the streets today for a planned million-strong march, the future of Sudan’s government will likely depend on two broad key issues.

Fractures in the military council

The first is the turbulent disposition of Sudan’s transitional leaders.

Over his 30 years in office, al-Bashir built a sprawling patronage machine to exploit Sudanese politics, purchasing support using rents expropriated from state institutions, public services and national industries. He coup-proofed his position by sharing Sudan’s bloated defence budget amongst security agencies – such as the National Intelligence and Security Services (NISS), Sudanese Armed Forces (SAF), Rapid Support Forces (RSF), and cluster of local militias – and stoking competition between henchmen, reducing their bargaining power. Relentless protests eventually made these configurations untenable, however, precipitating al-Bashir’s removal by a regime scrambling to save itself.

The fragmentation he fostered now leaves a problem for Sudan’s elite as they struggle to maintain consensus between themselves. Senior army commanders appear to be at the forefront of the transition, but it is unclear whether any prospective leader has the political capital to both assuage their rivals and appease the protesters.

For a start, SAF is not a symbol of cohesion as national militaries often are in other countries. While its rank-and-file may reflect the country’s heterogeneity, communities pushed to the geographic and social peripheries of al-Bashir’s Sudan largely dismiss it as a surrogate for Khartoum’s oligarchs. This reputation is further tarnished by its alleged war crimes committed in partnership with local militiamen across Darfur and during recent counter-insurgency operations in South Kordofan and the Nuba Mountains. As a result, SAF’s popularity is limited and fast diminishing, particularly after its condemnation by the Sudanese Professionals Association (SPA), which has been central in the popular protests.

The departure of Salah Gosh, the feared and disliked head of NISS, could help consolidate the military’s authority. But resignation does not necessarily equate to a loss of influence. Likewise, SAF cannot run the country on its own and needs to keep Sudan’s multitudinous paramilitary chiefs onside. The  appointment of RSF Commander Mohamed Hamdan (aka ‘Hemmeti’) as vice-chief of the military council potentially achieves this, but this move also significantly hampers Burhan’s autonomy.

The RSF is a well-armed offshoot of the Janjaweed, the infamous militia accused of atrocities in Darfur. Now designated as an official state body, the group was nominally folded into NISS and then the SAF in 2017 but has preserved discrete funding streams from those allocated to the army. It therefore occupies a peculiar position: operating as a self-serving entity with an independent command chain despite being a branch of the conventional armed forces. These arrangements have enabled the RSF to establish lucrative parastatal structures that function alongside, and often supersede, civil authorities. As its preeminent beneficiary, Hemmeti will resist any reform to this system and has the leverage to challenge SAF should decisions not go his way.

This leaves Sudan’s strongmen divided and facing a serious leadership vacuum in the absence of al-Bashir. Ad hoc bargaining has maintained some semblance of cohesion but pressure is growing.

Another key issue is the sustainability of the protest movement.

While coverage of the demonstrations tends to centre on Khartoum, the movement is far wider, drawing participants with diverse incentives, interests and preferences. First triggered in Atbara by bread shortages and reduced wheat subsidies, rural resentment with Sudan’s economic malaise intersected with the frustrations of middle-class urbanites struggling with high inflation. These grievances coalesced into a united platform demanding the president’s removal.

Al-Bashir’s departure puts that cohesion to the test. The strengths of the demonstrations lie in their composition, reflecting a broad cross-section of Sudanese society. Their ongoing success will likely depend on how far this holistic movement translates into an inclusive, nation-wide social contract. If a political compromise is bottled up in Khartoum, neglecting the aspirations of those beyond the capital, momentum may quickly dissipate.

Juggling these pressures, managing expectations, and identifying a common vision for the future will not be easy. Opposition figures, working under the umbrella Forces of the Declaration of Freedom and Change, have prescribed an extensive list of reforms including the immediate shift to a civilian-led transitional council, new anti-corruption measures and an end to economic austerity. Burhan has ceded to various demands so far, including promises to dismantle NISS. Yesterday, following SPA’s calls for a million-strong march today, three members of the transitional military council submitted their resignations; SPA had called for the three figures to be removed and tried over their alleged role in a crackdown that killed dozens of protesters. But the TMC is so far refusing to accede to the key demand to relinquish power swiftly, saying it could take up to two years.

This has created a deadlock in Khartoum, but outside the capital, public sentiments may be more ambiguous. Leaders of the Sudan Revolutionary Front, an insurgent group active in Darfur, South Kordofan and Blue Nile state, claim it is too early for dialogue. Years of graft and neglect meanwhile have starved local institutions in Sudan’s outer states. Bakeries are empty and fuel prices remain high. Given such hardships, it is unclear whether certain protesters have the patience for protracted negotiations or might settle for more immediate material concessions.

If the economy is a priority for some, the regime may be able to find breathing space. Saudi Arabia and the UAE were reluctant to continue bailing out al-Bashir, but agreed to send $3 billion in aid to the new military rulers a few days ago. While new tranches of Arab cash won’t fix the fundamentals, it may help Sudan’s strongmen extend their largesse, buy-off at least some of their critics, and possibly scapegoat the demonstrators for exacerbating the economic crisis.

Time may therefore have a decisive impact, particularly when the opposition looks to challenge a corrupt system rather than the tyranny of one man. Al-Bashir may be gone but the institutional legacies of Bashir-ism live on. While this is not an inevitable outcome given the regime’s fragmentation, demonstrators must ensure they continue to act as a nationally inclusive movement, presenting a common vision for Sudan’s future.

*Michael Jones is a Research Analyst at the Royal United Services Institute for Defence and Security Studies (RUSI).