(Telegraaf) Eritrean must return to Italy after a craft raft

Eritrean must return to Italy after a craft raft

Today, 7 a.m. in the UK
AMSTERDAM - The 26-year-old Eritrean who was picked up from the North Sea with a craft raft on Sunday must return to Italy. Sources report this to De Telegraaf. 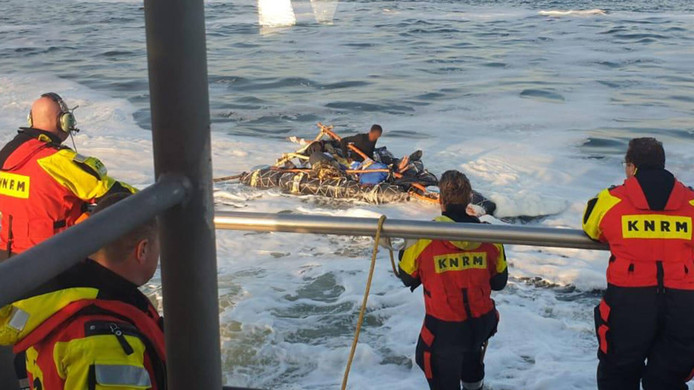 The KNRM brought a 26-year-old man from Eritrea with a homemade raft from the North Sea. © KNRM

A man from Eritrea tried to cross over to England with a raft of flower pots tied together, filled with empty plastic bottles and pursch foam.

The man has previously applied for asylum in the southern European country. According to European rules, it is now up to Italy. The Netherlands is preparing a claim in which the Italians will be requested to take back the Eritrean daredevil. The man was handed over to the Royal Netherlands Marechaussee after the rescue and is currently in detention.

The 26-year-old Eritrean bobbed off the coast of IJmuiden on Sunday. Rescue services did not know what they were seeing. "Flower pots tied together, filled with empty plastic bottles and PUR foam. And somewhere in the middle a kind of hammock, "says Walter Schot, skipper of the KNRM boat about the craft raft. In addition, the ingenious immigrant had cut up oars from tree trunks and trays.

The Eritrean was probably on his way to England. Schot does not consider the chance that he would have reached his final goal to be large. The Eritrean sailed in a navigation channel and therefore ran the risk of being sailed by large tankers.

Initially, the African England sailor had no desire to stop his journey. According to the crew, the man made a "confused and desperate" impression. Communication with the daredevil proved impossible. Schot: "He just shrugged." It is therefore unclear how long he has been floating on the water. And what his point of departure was. Schot suspects IJmuiden. The skipper says it would not have lasted much longer. It is also unclear when the man will be transferred to Italy. The IND never responds to individual cases, says a spokesperson.