VareseNews.it: Discovering Adulis, an ancient city in the Horn of Africa

The excavations started by the Castiglioni brothers, to which the University of Insubria collaborates, will be presented on Friday 7 June at Villa Toepltiz 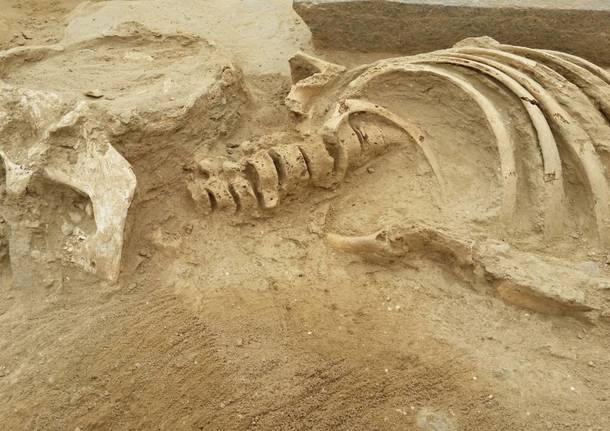 The important archaeological excavation of Adulis in Eritrea told by those who have been there.

A conference, to present the results that emerged from the excavation campaign that ended in March, is scheduled for  Friday 7 June at 5 pm in the seminar room of Villa Toeplitz, home of the Insubria Local History Center.

Speakers are the archaeologist  Angelo Castiglioni ,  Serena Massa , professor at the Catholic University of Milan, and  Omar Larentis , PhD student of the Insubria University, which promotes the event in collaboration with the  Research Center on the eastern desert  (Cerdo) and with the Castiglioni Museum, where at the end of the conference a guided tour is proposed to the exhibition  «Magie d'Africa. Religions, mysteries, symbols "that has just begun.

Adulis, the ancient port on the Red Sea where the Varese Alfredo and Angelo Castiglioni in 2011 started an important  international cooperation project , once again is revealing important scientific and historical results.

This year also  the University of Insubria participated , which joined the team that has been working on the site for years and includes the Ministry of Culture and Sports of Eritrea, the National Museum of Asmara and the regional Museum of Massawa. , the Catholic University and the Polytechnic of Milan, the Eastern University of Naples, the Pontifical Institute of Christian Archeology of the Vatican.

The innovations, above all of  an anthropological nature , resulting from the excavation of some burials are the subject of the intervention of Omar Larentis, accompanied by a brief documentary and numerous images. The meeting is introduced by  Angelo Castiglioni and Serena Massa , respectively the director and scientific coordinator of the mission.

The excavations of Adulis are revealing more and more information every year on this extraordinary  city ​​of the Horn of Africa , buried by a violent flood perhaps accompanied also by an earthquake. This hypothesis is suggested by the objects found whole in the layers of the ground and by the treasures of coins hidden in terracotta pots, abandoned in a hurry by the inhabitants to escape the catastrophe, as happened for Pompeii in the face of the advance of lapilli and the ashes of the eruption Vesuvius.

Adulis, already known for its ancient sources such as  Pliny the Elder , had probably already been reached by the Pharaonic expeditions in the II millennium BC, which identified this area of ​​the southern coast of the Red Sea with the name of Terra Punt, in which they sought rare and animal goods exotic. The stratigraphic excavations, currently circumscribed to the more recent phases of the site, have led to the discovery of exceptional  paleochristian evidences , represented by three basilicas dating back to the 5th-6th century, the oldest in the Horn of Africa. In the future, the same excavations will confirm, with the discovery of finds of Egyptian origin, that the area of ​​Adulis actually corresponds to the mythical Land of Punt.