Ethiopia-Insight.com: Ethiopia and Eritrea’s peace must be rooted in past 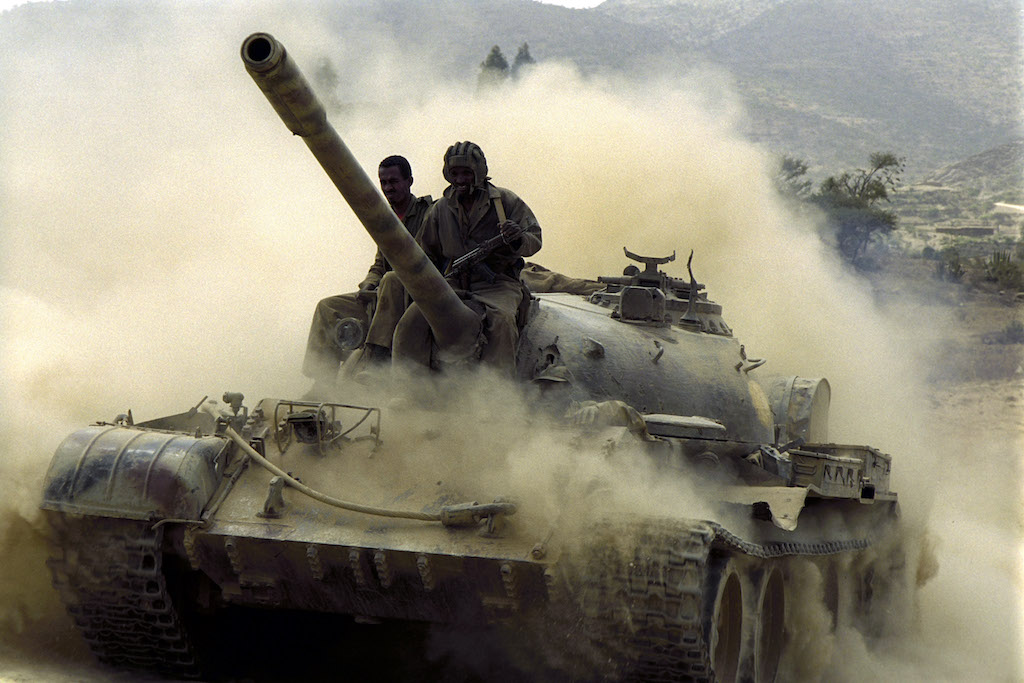 Main photo: An Ethiopian tank near Zalambessa during the war with Eritrea; June 2000; Petterik Wiggers

By Samuel Fikreselassie
August 9, 2019
Words can be a powerful tool to rally a nation and bring people together under a united vision. But they can also be divisive, and lead to the opening of old wounds and creation of new ones.

In April 2018, the eyes and ears of the world were on the two east African countries, Ethiopia and Eritrea, right after Ethiopian Prime Minister Abiy Ahmed’s declaration that he would accept the 2002 ruling of an international commission on their disputed border. He was the third Ethiopian prime minister to make an offer after his predecessors, Meles Zenawi and Hailemariam Desalegn. Both had tried to make peace, but no to avail.

On June 5 2018, Abiy astonished people by announcing that Ethiopia would give back to Eritrea the disputed border town of Badme in the Gash-Barka Region, 139 kilometres southwest of Asmara.

“Love is the only way with our Eritrean brothers.” was one of the most scrutinized statements of Abiy’s, a fact that has not escaped the Prime Minister’s Office as experts had been assembled to advise him on the appropriate wording for the occasion.

Clearly, they recognised Abiy’s call for peace upon his inauguration and his statements about “love” would be closely watched, and the audience in neighboring Eritrea would be particularly sensitive to Abiy’s every sentence and body movement.

After the announcement, in September 2018 the peace treaty was signed and borders between Eritrea and the northern Ethiopian provinces of Tigray and Afar were opened. Later on 26 December 2018, the Eritrea government partially closed the Zalembessa-Serha and Rama-Ksadika borders. Meanwhile, in December 2018 Abiy and Eritrean President Isaias Afewerki opened the Humera-Oumhajer border, which was also later re-closed.

A kind of family affair

Five months after the peace deal, Ethiopia partially withdrew its troops from the border. Such events and the ending of United Nations arms embargo and sanctions on Eritrea are the major achievements of the peace deal so far.  The agreement has enabled flights to resume, hostilities to cease, and families to reunite. Embassies and phone lines have reopened.

Still, there are two broad questions: Are there attitudes present and policies in place that will bring long-term reconciliation and effective peace-building between the two societies? And is there the political will in both countries to move forward on the historic issues that have divided them?

Several studies stressed that the war was unusual and fought as a kind of family affair. A French historian Gérard Prunier in an essay stated that, “Apart from the fighting between Ethiopia and Eritrean soldiers, the war was fought on ethnically homogeneous ground, the disputed areas being entirely populated by Tigrinya-speakers, belonging to the provinces of Tigray on the Ethiopian side and bordering Akele Guzzay and Saray on the Eritrean side.”

He argues that the war was intimately linked with the history of Abyssinia, “the Ethiopian empire” and with the political dynamics of the Tigrayan people; it was more of a civil war among Tigrayans than an “international” war.

Historical consciousness, particularly regarding the sense of humiliation relating to the war, is part of the national experience of these two nations. Historic issues have also been utilised by politicians and elite society as tools for mobilisation and provided justifications to rely on state force to restrict civil liberties.

Therefore, a major challenge for long-term reconciliation is to deal with these historical issues and promote genuine peace between people with deep grievances and misperceptions.

Another major challenge is that both countries have used versions of history to brainwash younger generations. In both countries, textbooks are compiled based on ethnocentric views, stereotypes, and prejudices, as well as the glorification or demonization of particular groups.

Isaias used the absence of peace with Ethiopia to justify authoritarianism and build a one-man dictatorship; now he is in his 28th year in power. The country has no legislature, no independent civil society or media, and no independent judiciary. The government restricts religious freedoms, banning all but four groups.

Isaias used the conflict to institute near-indefinite conscription lasting decades and often indistinguishable from slavery. Any political opponent who questions Isaias’ rule is liable to be jailed indefinitely without trial, often incommunicado.

On the Ethiopian side, the ruling front went through its own challenges following the signing of the Algiers Agreement in 2000, as the Central Committee of the Tigray People’s Liberation Front (TPLF) split into two factions.

The controversial 2005 parliamentary election, accusations of human rights abuses, and violence and protests made EPRDF more concerned with internal political instability than the border town of Badme. The TPLF-dominated coalition used its power to severely constrain civil society, the press, and almost all forms of political opposition.

Though TPLF and EPLF spent much of the 1970s and 1980s fighting alongside each other against Ethiopia’s military government, the Ethio-Eritrean war of 1998-2000 was essentially a conflict between the two groups over ideology and hegemony.

Disputes arose between Addis Ababa and Asmara over issues like landlocked Ethiopia’s access to Eritrean ports Massawa and Assab, the exchange rate between the Birr and the newly introduced Nafka; and a disagreement over the demarcation of the border, including Badme. The war ended in June 2000, but an estimated 70,000 to 100,000 people were killed, one million were displaced, and a generation of development opportunities was squandered.

Following the June 2000 ceasefire agreement, the two countries signed an agreement in Algiers in December 2000 and established a border commission to resolve the issue. But in 2002, when the commission awarded the town to Eritrea, Ethiopia balked and demanded further negotiations. Eritrea refused to negotiate unless it was first given Badme.

This peace deal has big challenges

So, the two countries remained locked in a stalemate, marked by occasional flare-ups of violence at the border, for more than two decades. The speech by Prime Minister Abiy on 5 June was therefore delivered while the two Horn of Africa countries were in this tragic condition.

The speech and a visit by an Eritrean delegation to Addis Ababa helped launch the July summit held between the two leaders in Asmara. Right after the summit, Abiy made a historic visit in July to Eritrea during where he and President Isaias signed a declaration ending 20 years of hostility.

The rhetoric massively shifted from words of war to words of affection. However, in addition to historic grievances, this peace deal has big challenges on both sides.

One of the major problems is TPLF, which has become marginalised under the new government, and some groups who had previously benefited under TPLF pre-eminence. The Tigrayan generals, TPLF intelligent chiefs, and politicians, many of whom fought in the war against Eritrea, don’t want to lose in the tradition, prestige and pride competition. Some analysts think that they make the agreement’s implementation difficult. On the ground, for example, the Badme issue is not yet resolved.

On the Eritrean side, the lack of institutions and the absence of the rule of law will make future cooperation and reconciliation efforts between Ethiopia and Eritrea even more challenging.

So far, the leaders’ speeches have played a great role in the success of the peace agreement. However, will rhetoric, the historic accord, and a Joint Commission encourage the people to reconcile and build long-term cooperation?

I would say no. I would suggest that to achieve this the two nations need to explore a new approach in dealing with conflicts that are deeply rooted in history and memory.

Sincerity is a key component of post-war diplomacy as the main audience is the victims of the war. However, paying too much attention to the words of speeches is the wrong approach; what is more important is that the speech conveys the sincerity of the two countries’ people and the leaders themselves.

Simply, it is about whether the leaders are genuine in what they say, knowing and understanding the past actions and giving a clear and true apology for the mistake that has been made and reflecting upon them.

Speeches often look forwards, but looking to the future is the wrong track because Ethiopia and Eritrea never achieved reconciliation. Without the sincere reflection of the past, there will not be real reconciliation, and without reconciliation, there is no positive future.

As with the reconciliation process in other East African countries after civil wars, reconciliation between Ethiopia and Eritrea is not easy. Since the war, the two countries did not directly engage in open warfare. Rather, each resorted to stationing troops on the border, while backing rebel groups in each other’s territory.

However, throughout the Ethiopian-Eritrean diaspora, there have been many multi-ethnic and bi-national origin communities to foster good relationships, promote and express cultural commonalities well before diplomatic ties between the two countries’ governments were ever restored. Those communities even have a common name, habesha, to eliminate the distinction between the two countries and celebrate unity as people of the same region.

But the fledgling peace raises new questions for Eritrea’s diaspora, tens of thousands who fled their government’s tight grip, rigid system of compulsory military conscription, and Eritrea’s entrenched poverty. Now they are cautiously waiting to see how the truce will shape their homeland and perhaps offer them a chance to return.

Recently the divided homeland and diaspora perception of President Isaias’ brutal dictatorship has resurfaced and plays an even more negative role compared to any time since last year’s peace.

Some domestic communities are dismissive of the peace agreement, even accusing Isaias of wanting to reintegrate Eritrea into a federal Ethiopian state, thereby eradicating the heroic history of the Eritrean struggle for independence.

Meanwhile, communities in exile accuse the government that no public discussion has taken place about the thaw in relations with Ethiopia. The government has not explained its rationale for accepting Abiy’s offering, nor has it articulated its vision for what its relationship with Ethiopia should be.

There is no doubt that the sudden thaw between long-time enemies opened up a world of possibilities for the countries’ residents: new economic and diplomatic ties, telephone and transport links, and the formal end to one of Africa’s most bitter feuds. But while people often discuss historical problems in the bilateral relations of Ethiopia and Eritrea, they normally only take history as a background issue, as well as placing the blame for the conflict solely hardliners.

African countries often overlook the importance of the role that history education and social narratives play in international relations. They also believe that any change to these aspects takes a long time to produce results; therefore, it is seen as impractical to address these issues as a part of a reconciliation framework. I believe that this is an important reason why conflict, tensions, and hostility between African nations often last a long time.

Without addressing the underlying roots of hostility, nations will be unable to build a normal relationship. To create conditions for long-term reconciliation, it is vital for the people of both countries to be aware of the other side’s perceptions and understandings of history.

As the first step to improve their relationship, both need to take time to replay the events that are causing tension and so gain a perspective on the reasons for the relationship’s deterioration. Without knowing exactly what the other side’s perspective is, and reasoning behind the perspective, it is hard to find a solution. As part of this process, Ethiopia and Eritrea should also begin to conduct history education reform and should resume their joint history research and joint history textbook projects.

Reconciliation will largely depend on whether citizens of the two countries, especially the policy makers and think tankers, realise that history is not just one of a number of subjects at school. It plays an important role in constructing a nation’s identity and perceptions.

Without addressing this deep source of grievance that presents a tough obstacle, it will be tricky for the two countries to find a path to sustainable coexistence.