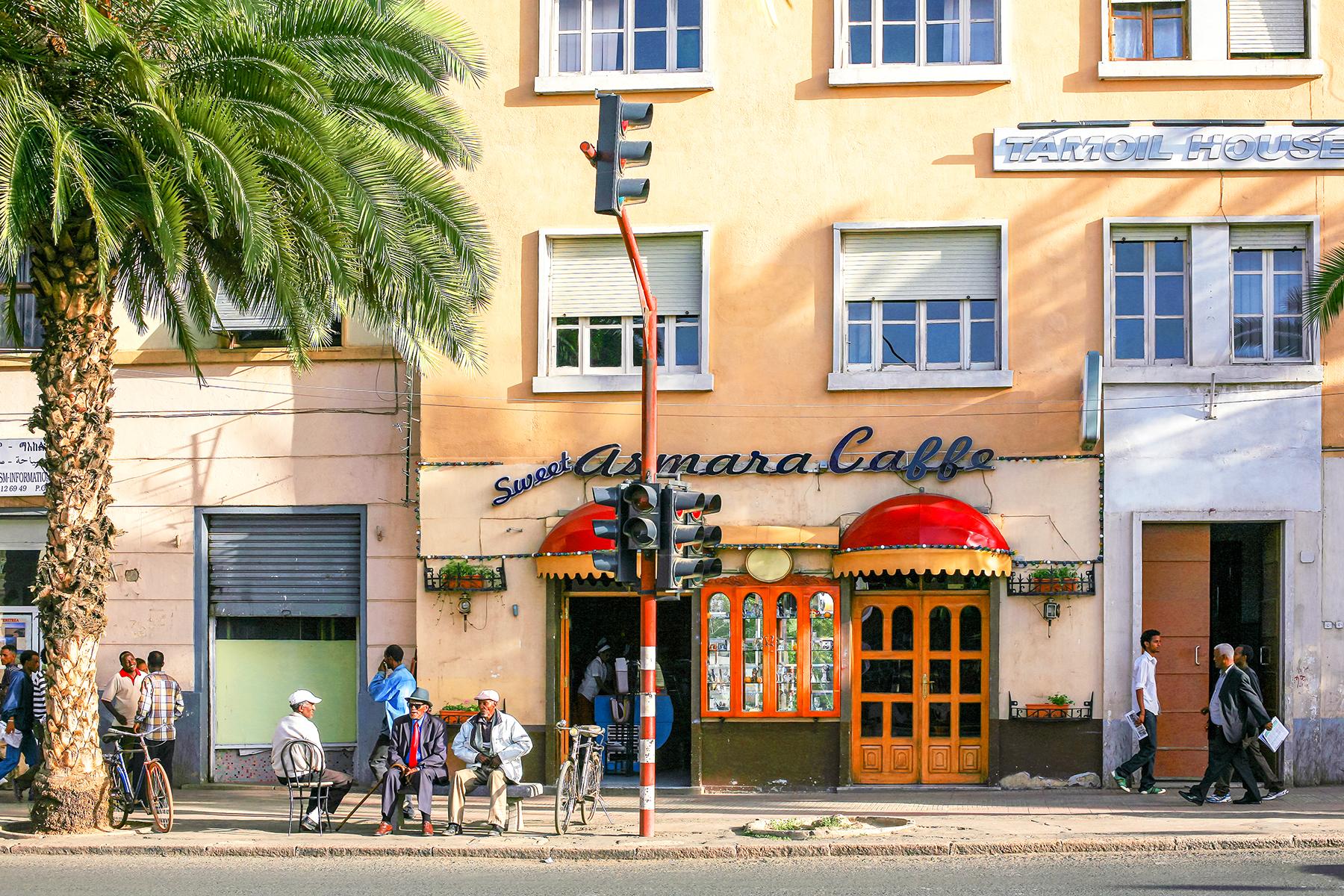 A modernist metropolis in the middle of the African desert. Eritrea finally opens to the world and its capital city, Asmara, is an architecture fan’s dreamland.
By Suzi Siegel | August 28, 2019

Eritrea, long referred to as Africa’s “Hermit Kingdom,” is finally opening up.

This is big news not just for adventure travelers but for architecture buffs, as its capital city is home to the largest, finest and most intact collection of modernist buildings anywhere in the world.

The rare trove of Italian colonial-era buildings has been seen by precious few outsiders because the Horn of Africa nation has long been something of a pariah state. Tides are turning. The U.N. Security Council just lifted its sanctions against Eritrea for making strides on human rights and press freedom. The country also recently inked a peace deal with its neighbor Ethiopia after warring on and off for 40 years.

And, in a long-awaited move, the capital of Asmara has been named a UNESCO World City Heritage Site, an honor that is rarely bestowed upon sub-Saharan Africa. The city has been called the “Miami of Africa” for its stunning concentration of buildings constructed between 1935 and 1941. During this era, Italy was bent on making its colonial outpost a futuristic utopia by experimenting with radical new design ideas.

That all came to end when Fascist Italy lost WWII and its control of Eritrea. Colonists vanquished, the Eritreans soon found themselves seemingly at endless war independence after being annexed by Ethiopia. After finally winning its independence in the 90s, Eritrea became an oppressive one-party state with one of the worst human rights records in the world. Because of the country’s extended isolation, the modernist metropolis has remained virtually untouched since the 1940s. With the promising new developments, however, Eritrea is opening up.

And while there is still a State Department Travel Advisory in effect, the country is largely considered safe (it’s designated a Level 2 for “Exercise Increased Caution” out of 4, which is “Do Not Travel”). A traveler is likely in danger of only coming for the architecture and staying for everything else: bocce clubs, chrome espresso machines, soaring mosques, women in gauzy white headscarves, Tigrinya music and a perfectly preserved 50s-era bowling alley. Oh, and of course, the top-notch pizza and gelato that’s as good as any you’d find in Roma. In fact, the city was once called “Piccola Roma” or “Little Rome.”

If you’re a thoughtful traveler who loves Africa, Italy, modernist architecture, history, being unencumbered by other tourists, or any combination of the above, Asmara is a thrilling city to explore.

Here are some of its most feted architectural standouts: 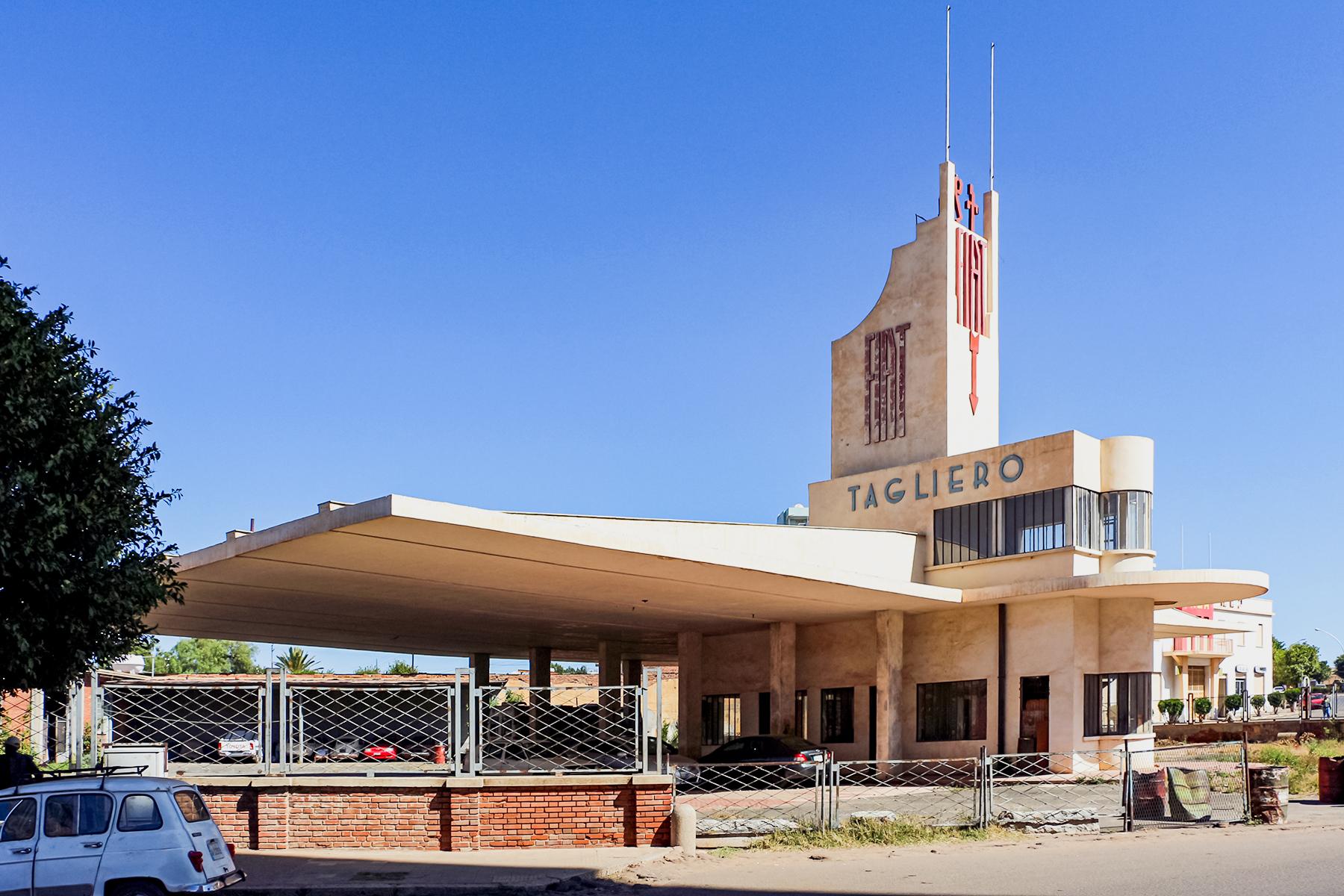 Asmara’s preeminent edifice, the Fiat Tagliero building, has been referred to as “the world’s most beautiful petrol station.”

Built in 1938, the 100-foot concrete wingspan was meant to evoke a soaring airplane and is considered one of the world’s most supreme examples of Futurism. With its Art Deco lettering in both Italian and Amharic, the daring structure is a marvel to stand under.

It was a remarkable engineering feat for the time because the long, cantilevered wings were unsupported by pillars. Legend has it that at the building’s inauguration architect Giuseppe Pettazzi put a gun to the head of a contractor who balked at removing the wooden stanchions holding up the building’s wings because he was terrified the building was going to cave in without them. Needless to say, the beams were removed and the building stayed aloft. 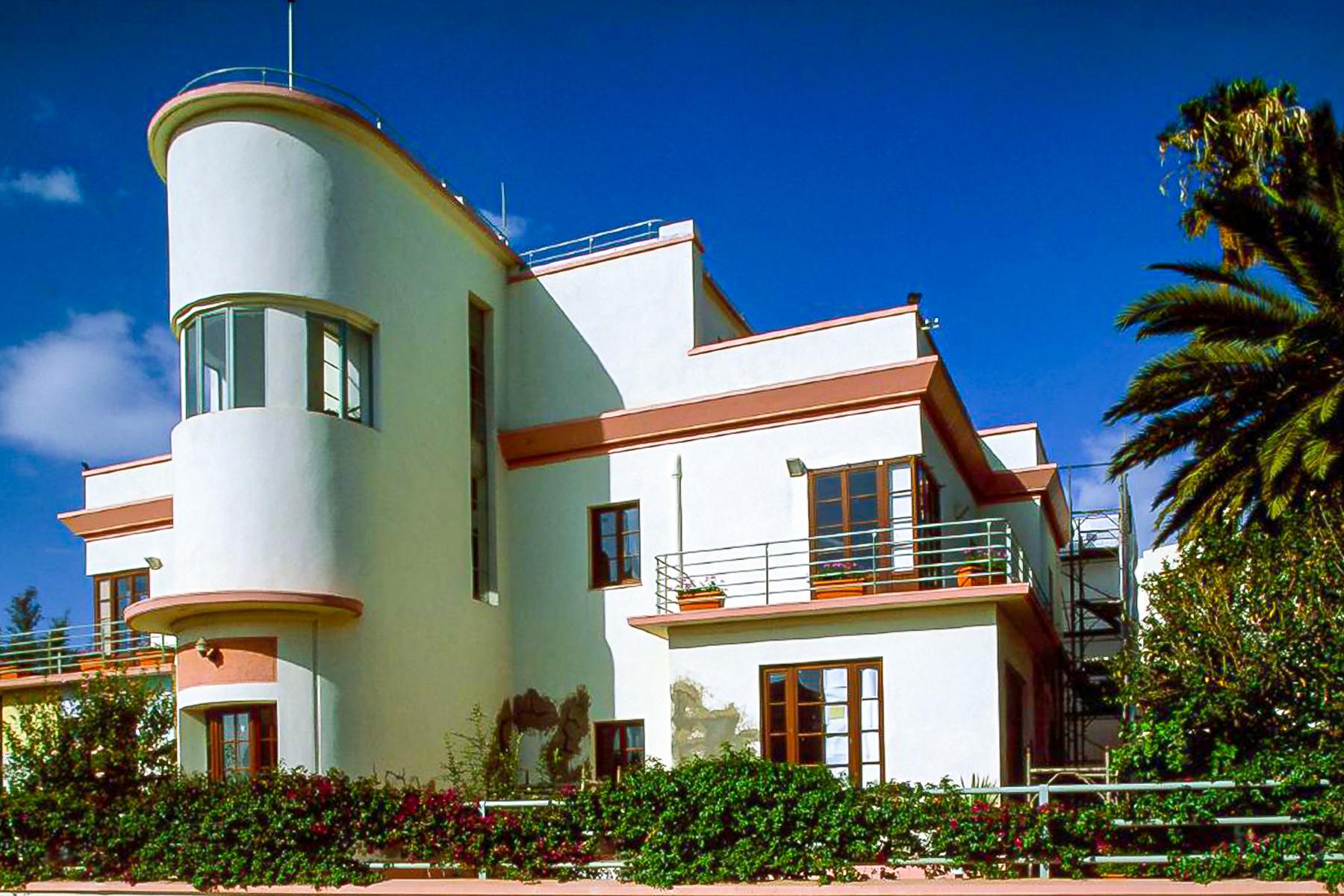 The World Bank Building is a large Italian villa built in 1938 in a blend of Art Deco and Futurist styles. Futurism, a movement that started in Italy, rejected the ornamental aesthetic of the past and exalted what’s next. Its proponents embraced motion and machine as their inspiration.

This building, with its elliptical long lines, is a beautiful example of the speed and movement that are fundamental traits of Futurism. The mansion once belonged to a wealthy Italian emigrant and was later purchased by the World Bank for its headquarters.

Eritrea is one of the world’s least developed countries largely because of its protracted war with Ethiopia and its heavy dependency on rain-fed agriculture since the area suffers from droughts. As peace comes to the region and it opens up to the world, however, material conditions there will hopefully continue to improve. 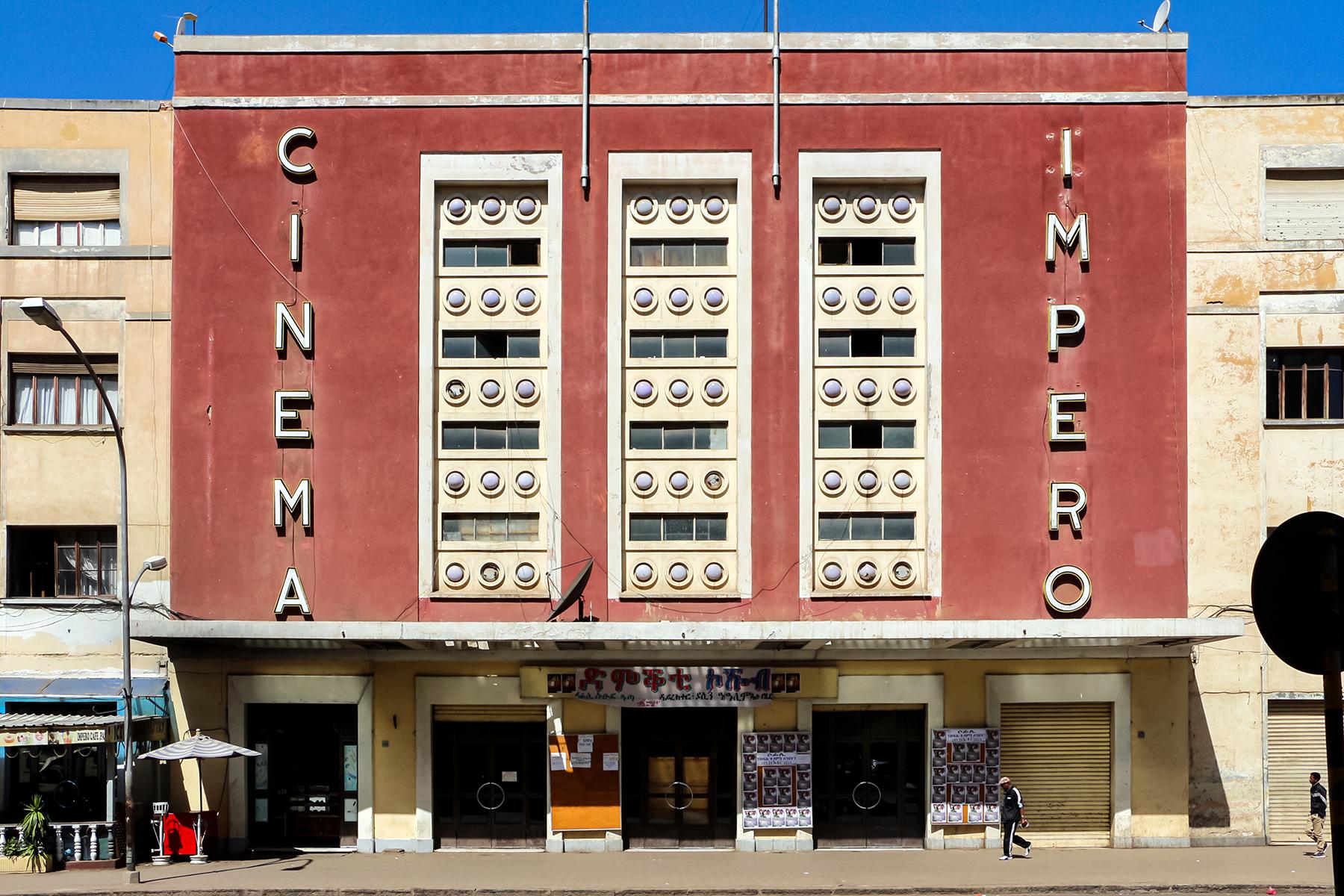 Opened in 1937, the cinema’s stylish façade is considered a stunning example of 1930s movie theater design. The white letters are laid out vertically on a maroon splash of color banded by three white columns and round lights. At night, the backlit frontage is sublime. 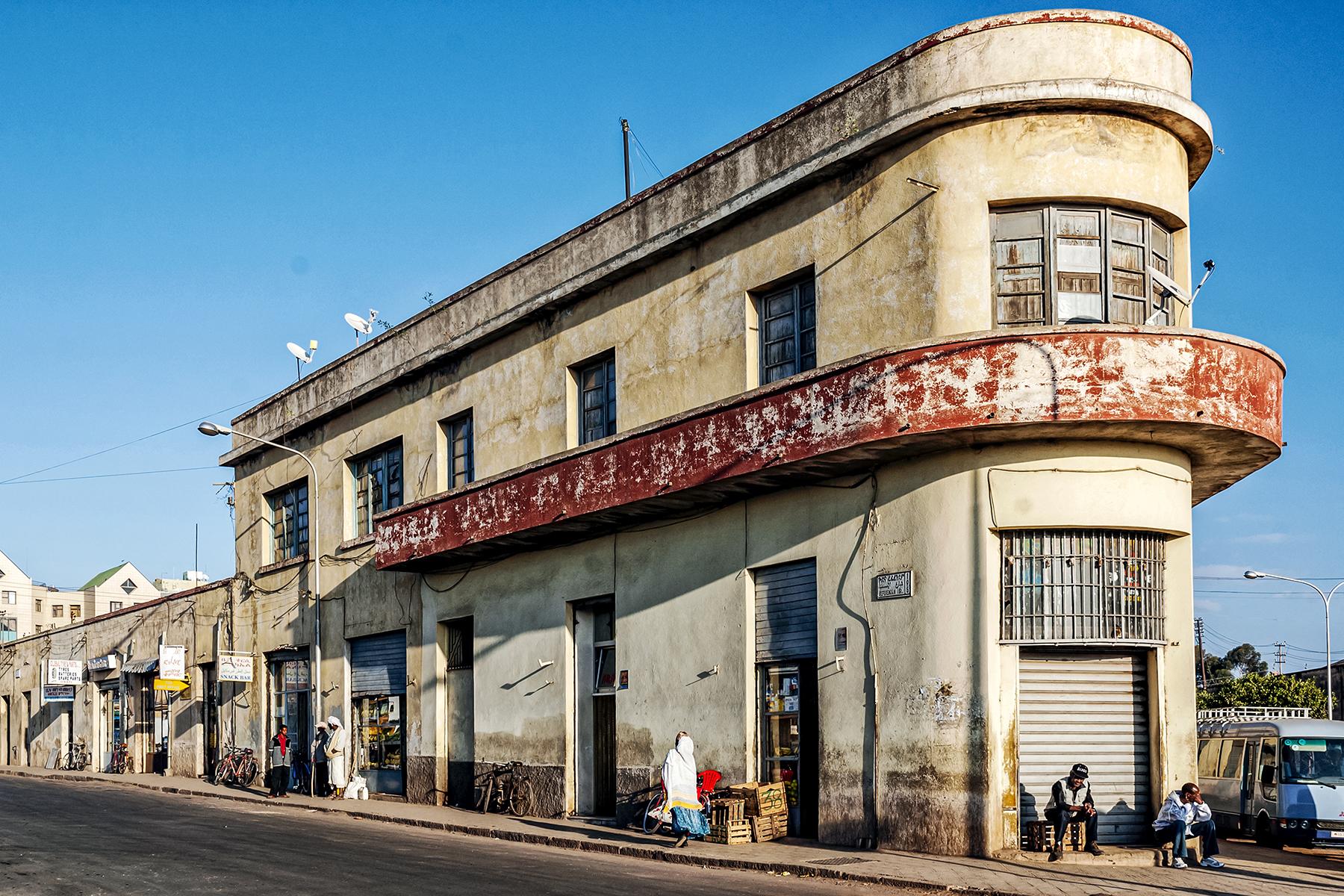 UNESCO granted World Heritage status to the city not just for its well-preserved architecture but for how it lives and breathes on in a vibrant African context.

Aside from the architectural gems, the day-to-day sights of Asmara offer their own delights. This shot of a spiffily dressed gentleman passing in front of a cheese store whose sign is in both Amharic and Italian illustrate the interplay of cultures still alive today.

Springing from a desert mountaintop 8,000 feet above sea level, Asmara is the sixth highest capital in the world and the weather is mild year round. Always dressed to the nines, locals are known to catch up on current events over an espresso and take their nightly passeggiatasaround the city’s piazzas and wide bougainvillaea-dotted boulevards.

INSIDER TIPHave a listen to the Asmara All-Stars, a troupe of former Army-employed musicians who recorded an album called Eritrea’s Got Soul. 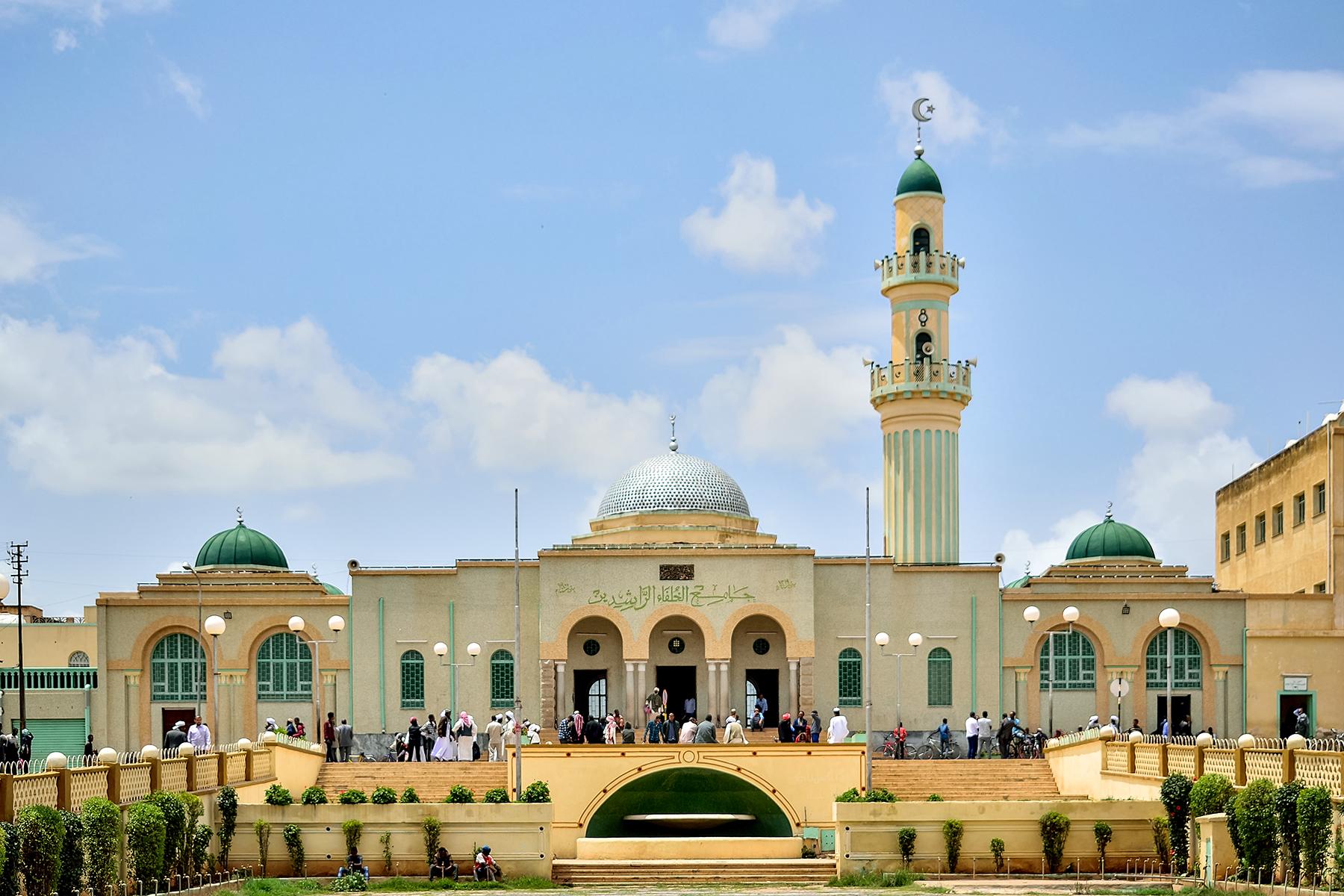 Completed in 1938, the Great Mosque is smack dab in the middle of the city. The mosque’s soaring minaret stands out in Asmara’s skyline can be seen from any part of the city. Look closely at the bottom of the tower under its balconies and you might notice it looks like a fluted Roman column.

The story goes that Benito Mussolini himself had the imposing edifice built to impress the local Muslim population. The mosque combines Islamic, Rationalist and Classical styles and was built with marble imported from Tuscany.

Eritrea’s population is evenly divided into Muslims and Christians who have lived side-by-side in harmony since ancient times. The city is also home to neo-Romanesque Catholic Church built in 1923, an eclectic Eritrean Orthodox Cathedral in the Rationalist style dating to 1938 and a synagogue constructed in 1906. 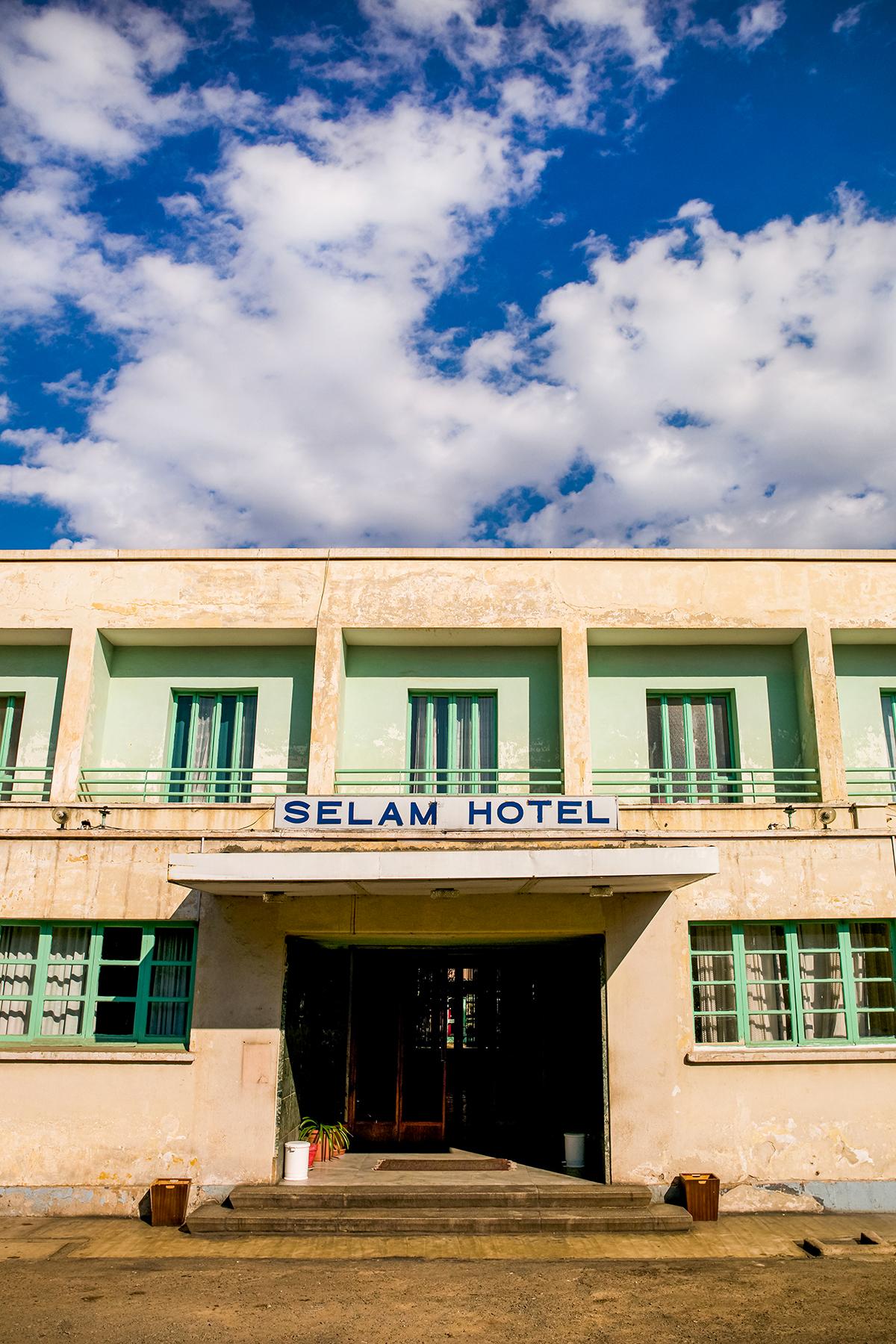 Don’t let the simplicity of this hotel fool you since that’s the point. The Selam Hotel is Asmara’s “purest example of Rationalist architecture, as evidenced by its uncomplicated form and the geometric simplicity of its elements,” according to a UN dossier.

Built in 1938, the hotel was remarkably progressive for its day. Besides its architectural significance, it’s an epic place in the country’s history.

After centuries of subjugation by the Ottomans, Egyptians, Italians, British and finally, the Ethiopians—99.83% of Eritreans voted for self-determination in an international referendum that gave 1 million Eritreans across 40 countries the chance to determine their own future.

Poll watchers at the time described a state of euphoria, with election sites decorated with rugs, lights, streamers and flowers. People danced in the streets for days after the plebiscite and it was at the Selam Hotel on April 27, 1993, that Eritrea was officially declared a free and independent nation. 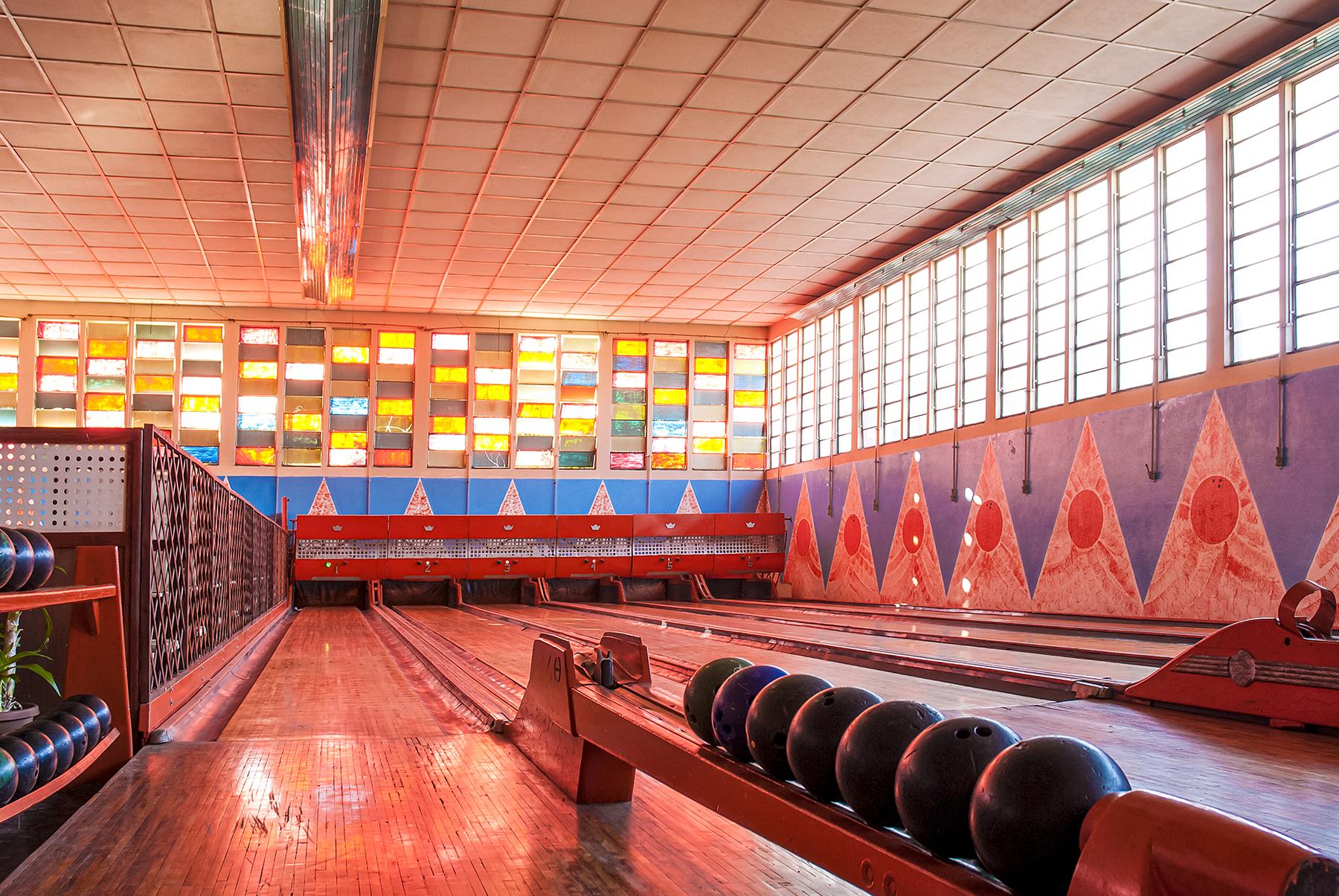 Okay, a 1950s era Brunswick Bowling Alley may not be a highbrow work of modernist architecture, but it’s one of the most magical places you visit in Asmara even if all you do is throw gutterballs there.

The place was built to entertain American soldiers who manned a nearby military listening station during the Cold War and is one of the last unspoiled bowling alleys from its era left in the world. Checkered stained glass windows scatter a whimsy of colored lights that make the orange machinery and rounded wooden benches glow and young boys set the wooden pins by hand after each toss. (This short video captures the enchantment of the place.)

As if the scene isn’t cinematic enough, older gents in fedoras gather to play an Italian version of billiards called boccette. And, as everywhere else in Asmara, a vintage espresso machine froths up authentico café in case you need a little pick-me-up between strikes and spares. 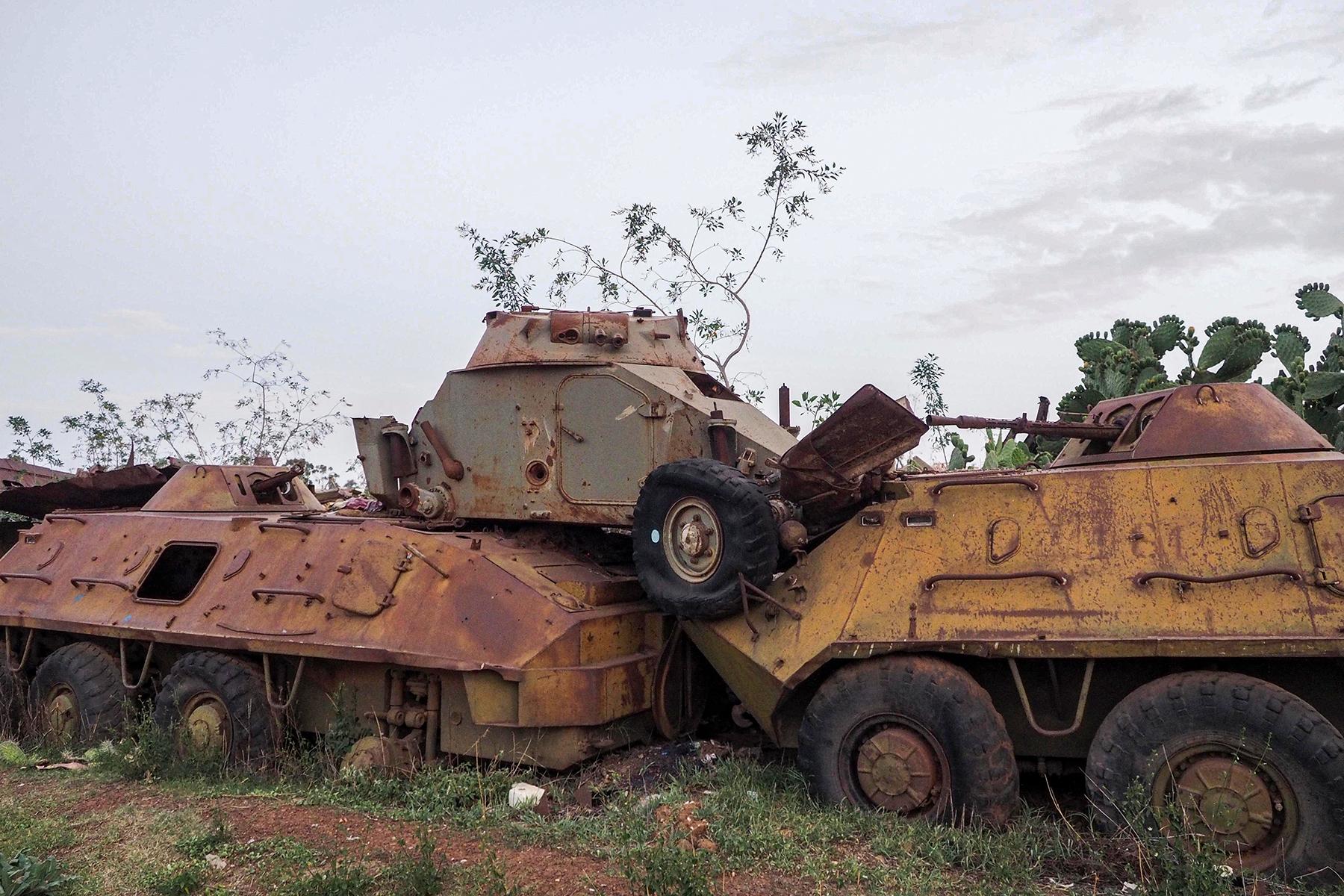 This iron mountain is made up of tanks, armored vehicles and other war machines, the rusted corpses of Eritrea’s bloody, protracted battles with Ethiopia for its independence. While the Tank Graveyard is not an architectural wonder, the place almost feels like a surrealist accidental monument.

The only other bona fide tank graveyards in the world are in Afghanistan, Kuwait, Croatia and on the India/Pakistan border. The makeshift monument is right on the edge of town and you need a permit from the local tourist center to go and visit it. But it doesn’t cost much or take long and is definitely worth it. 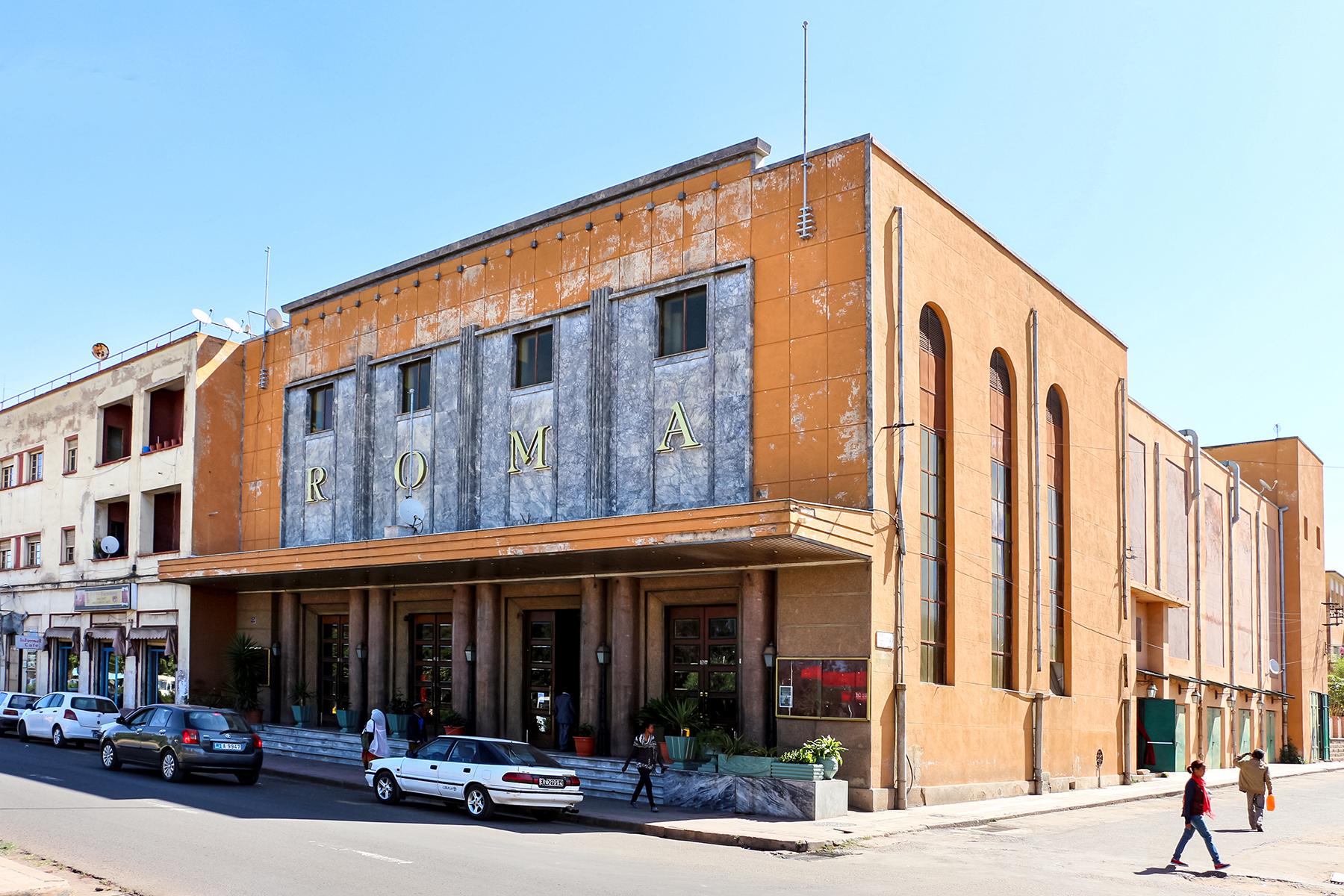 Another old world cinema, this one built in 1937, was originally called “Cinema Dux” but had to change its name because Mussolini refused to approve it. Why? Il Duce apparently was miffed the name sounded too much like his title.

Today, locals fill the tables on the terrace underneath the marble façade to sip their cappuccinos. A massive film projector from days gone by sits in the middle of the café and the walls are lined with vintage movie posters.

The theater, which was modernized in the 1990s, is the most popular cinema in town. Screenings of outdated American movies and Eritrean shows are the big attractions. 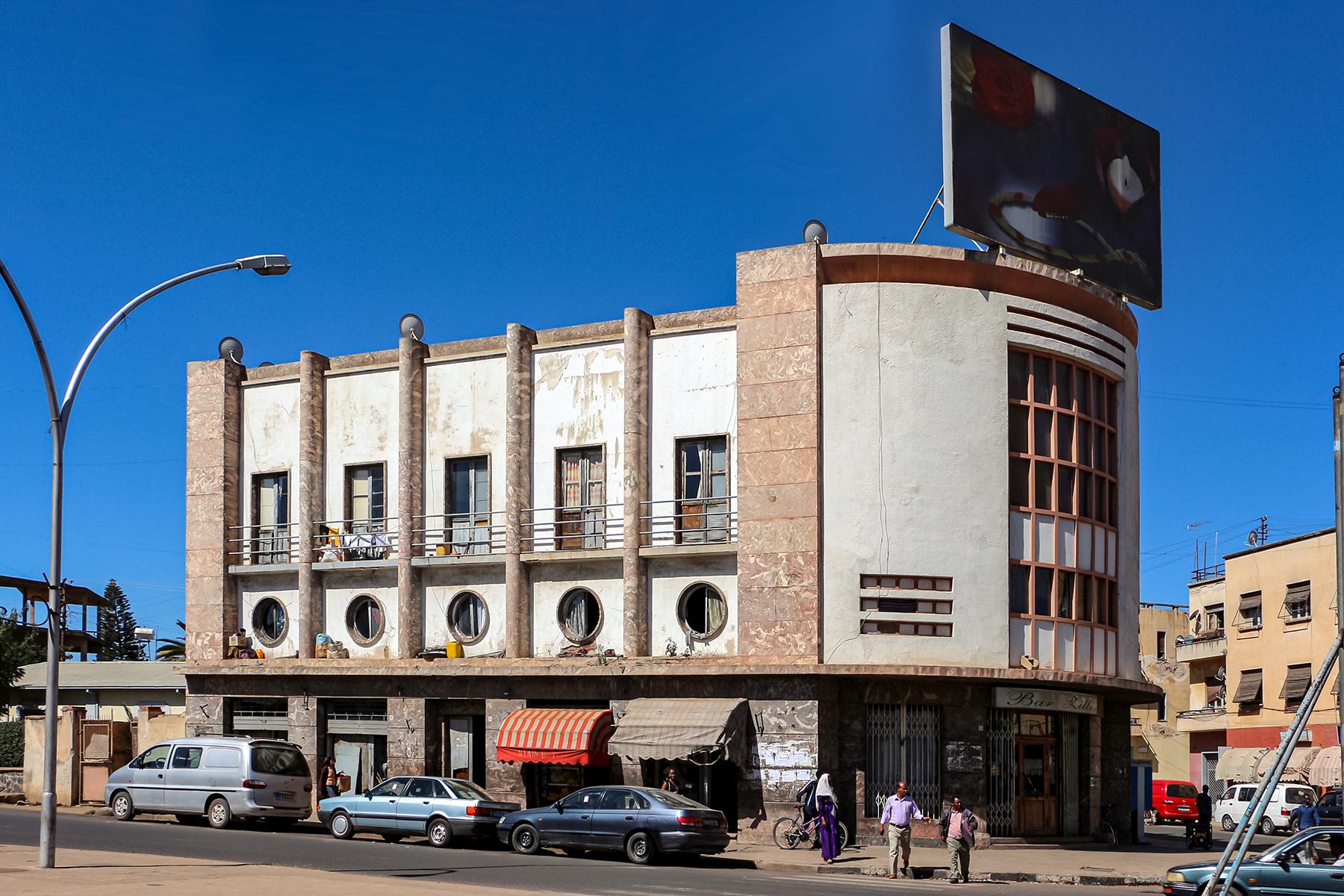 Take a load off in the 1930s bar designed to look like an old-timey radio. The porthole windows evoke radio dials or tuning knobs. The curved façade with a mix of central vertical windows and small horizontal strips at the corners are the reasons why experts have called this structure “idiosyncratic” and “distinctive.”

Inside, it’s like stepping back in time. The place is known for its healthy pours of Asmara Dry Gin, a spirit brewed and bottled locally that is not for the faint of heart. The local Asmara Beer, which comes in lager, draught and stout, is probably a better choice for most.

Whatever your poison, Bar Zilli is a charming place to take a break from the sun and chat with some locals. The main languages spoken in Eritrea are Tigrinya and Arabic, but English (and Italian, of course) are widely understood.