(Newsinenglish.no) Police seek jail term for retired Bishop Gunnar Stålsett (84) after he admitted to hiring an asylum seeker from Eritrea without a work permit

The 84-year-old former bishop of Oslo, Gunnar Stålsett, has been ordered to appear in court just a week before Christmas. Norwegian police want him sentenced to 45 days in jail, because he has illegally employed a woman from Eritrea who’d been denied asylum and wound up as an undocumented and rejected refugee. 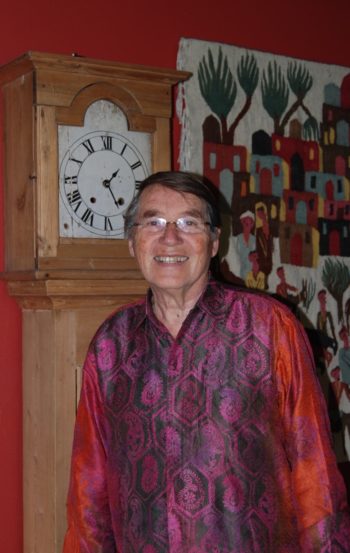 Retired Oslo Bishop Gunnar Stålsett is perhaps best known for conducting the royal wedding of Crown Prince Haakon and Crown Princess Mette-Marit. He’s also been a member of the Norwegian Nobel Committee and active in international peace efforts. This photo was taken last year in connection with his travel to Myanmar, where he’s also been trying to help persecuted refugees. PHOTO: newsinenglish.no/Nina Berglund

Stålsett hasn’t wanted to comment on the case to local media since TV2 reported that he’d been charged for hiring an asylum seeker who has no legal working permission in Norway. On Friday TV2 reported that the retired bishop has received a summons to appear in court in mid-December.

He had told newspaper Vårt Land earlier this autumn, however, that he would face any charges against him. He called his hiring of the woman identified by Norwegian Broadcasting (NRK) as 55-year-old Lula Tekle as “a form of civil disobedience for which I’ll take responsibility. It’s directed at what I view as an immoral law.”

It was still legal for Tekle to be hired as paid cleaning help at the bishop’s residence in Oslo in the early 2000s. It was also legal for Stålsett and his wife to hire Tekle to help them at their home when he retired as Oslo bishop 14 years ago. A vast majority of Norwegians also support asylum seekers in Norway.

In 2011, however, Norway’s left-center coalition government led by the Labour Party was under political pressure to toughen its immigration and asylum policy. Newspaper Dagsavisen reported on Saturday how Labour, the Socialist Left (SV) and Stålsett’s own Center Party changed the law to make it illegal to employ undocumented rejected refugees who for various reasons can’t be deported to their home countries.

That left Tekle suddenly without working permission and the tax card needed to work legally in Norway. The Stålsetts kept her on, albeit illegally. “Gunnar helped me,” Tekle told NRK on Friday. “I have survived until now because of them (Stålsett and his wife), because they have helped me.” Not only did they provide employment and a modest source of income, they reportedly also helped Tekle with food and clothing.

No regrets
Stålsett, who also has served as a member of the Norwegian Nobel Committee and been active in international peace efforts, told Vårt Land that he was aware of the law change and the new immigration regulations. He has also been aware of the consequences an illegal hiring can have, including jail time, but he has no regrets.

“I’m willing to take on that burden,” Stålsett told the newspaper. “It’s nothing compared with what undocumented immigrants have gone through for decades in Norway. They live in fear every day.”

Prosecutors contend they’re just doing their job in upholding the law. Since Stålsett has formally acknowledged that he’s guilty of employing an illegal alien, they’re seeking what they call a “short” jail term “for having used illegal labour.”

Justice Minister Jøran Kallmyr of the conservative and immigration-skeptical Progress Party claims the law is the same for everyone, and that Norway needs to crack down on asylum seekers whose country of origin is unclear. NRK reported that Tekle arrived in Norway without identification papers, and state officials have raised questions about whether she’s actually from Eritrea. They also argue that it’s now safe for her to return to Eritrea. With no papers, however, it’s uncertain whether she’d be allowed to return.

‘An intolerable situation’
A case similar to Stålsett’s played out in Stavanger earlier this year, after businessman Arne Viste hired several undocumented asylum seekers. He was found guilty but received a suspended one-year prison term, meaning he won’t have to actually serve jail time. Visste has appealed, however, arguing that rejected refugees who can’t return to their homelands are in “an intolerable situation.” Visste said he is still hoping “for a positive court verdict.”

Stålsett wants the law to be changed, calling it “immoral” because it leaves rejected refugees stranded in Norway with no working permission, no place to live and no access to health care or social benefits.

Dagsavisen editorialized on Saturday that the case against Stålsett should be dropped, not because he deserves any special treatment as a retired bishop but because “the law is wrong” and must be changed. The newspaper also urged the state prosecutor’s office to “send a signal that these cases should not be a priority. The charges against Stålsett challenge the public’s feelings of justice.” Norway’s Archbishop Helga Haugland Byfuglien called Stålsett “brave” and that he deserves respect for his standpoint.