(Al-Ain) Tripartite summit between Ethiopia, Eritrea and Somalia in Asmara

Tripartite summit between Ethiopia, Eritrea and Somalia in Asmara 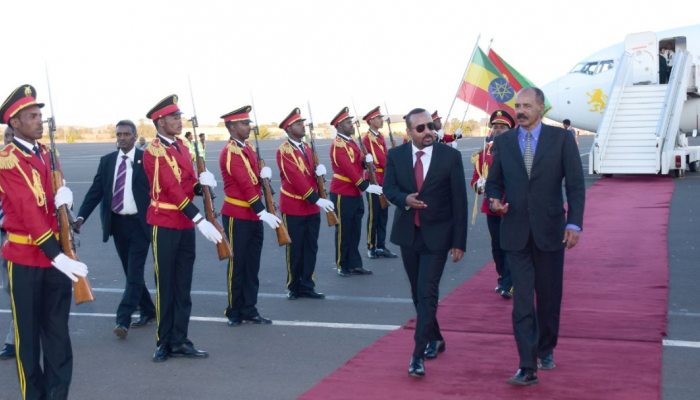 Isaias Afwerki during Abi Ahmed's reception
On Sunday, Ethiopian Prime Minister Abi Ahmed arrived in the Eritrean capital Asmara to participate in a tripartite summit that brings him together with Eritrean President Isaias Afwerki and Somali Mohamed Abdullah Faramajo.

The tripartite summit is scheduled to discuss cooperation and integration between the countries of the Horn of Africa and the promotion of peace and stability in this region.

Abi Ahmed was received upon arrival at Asmara airport by the Eritrean President.

Before leaving Addis Ababa, Abi Ahmed said I will meet with my brothers the leaders of Eritrea and Somalia, and we will discuss a wide range of issues of concern to our countries and the region.

On the 25th of last December, the Eritrean President visited Ethiopia for two days during which he conducted field visits with Prime Minister Abi Ahmed, for a number of projects in the country.

Afwerki and Abi Ahmed also laid the foundation stone for the new Eritrean embassy building in the center of the Ethiopian capital, Addis Ababa.

Afwerki's fourth visit to Ethiopia, after the two countries ended their differences in July 2018, and signed a historic reconciliation agreement that ended a conflict that has lasted for more than two decades.

This is the third summit that brought together Abi Ahmed, Afwerki and Farmajo since the return of relations between the three countries.

The endeavors to strengthen regional cooperation come after the declaration of "peace and friendship" between Addis Ababa and Asmara on July 9, 2018, ending the war between the two countries.