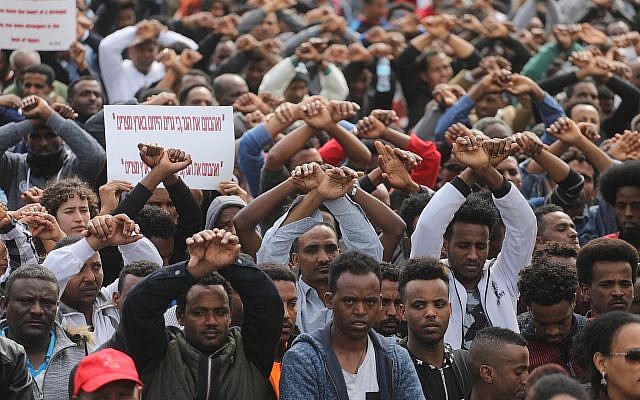 Israel is home to nearly 40,000 African asylum seekers and migrants – of whom some 72 percent are Eritrean and 20 percent Sudanese – some of whom began to arrive as early as 2005

The Population and Immigration Authority failed to respond to or rejected without thoroughly examining 99.7 percent of asylum seeker requests filed from 2011 through 2019.

HIAS Israel obtained the authority’s official statistics either through freedom of information requests or through court petitions. The data was put together for a report being published on Wednesday whose findings are being reported here exclusively by Haaretz.

The report states that of 64,542 asylum requests submitted from 2011 through 2019, only 39 were accepted (0.06 percent). Only 0.2 percent of requests were rejected after being fully examined, including a review by state’s advisory committee on refugees.

The courts have already criticized the rejected applications based on expedited processes, saying that only in extraordinary circumstances should requests be rejected outright. The former state comptroller, Yosef Shapira, also criticized the expedited review process. A strongly worded report from May of 2018 said the authority “violated its duty to fairness in outright rejecting asylum requests.”

Another worrisome find is that despite the Interior Ministry promising in July 2019 to reexamine 13,000 requests by Eritrean citizens, only 32 of these cases have been reviewed and only 21 of these have been decided upon. In nine instances, the committee gave a positive recommendation to grant asylum but these decisions still depend on the minister’s approval.

Last year, the ministry issued new criteria for approving asylum requests from Eritreans who defected or dodged military service. This move occurred after a Jerusalem appeals board found two years ago that defecting from the Eritrean army could be a rationale for providing refugee status. The ministry has yet to handle the relevant requests dating back to the beginning of 2014.

The report examined whether problems cited by the report Shapira issued in 2018 had been addressed. Shapira’s report had said that there were substantial arrears in the handling of these requests, and that the service provided asylum seekers was lacking, and that their requests were rejected outright.

The latest report finds that not only were these faults not fixed, but also that the authority simply handled fewer requests with less personnel on hand and taking longer to do so. Thus, while the report notes that as of 2018, the rate of recognizing asylum seekers as refugees was 0.09%, it is now down to 0.06% of all requests submitted from 2011 through the beginning of 2020.

Requests are also taking longer to process. The comptroller’s report said the average time taken to review an asylum seeker’s request was eight-and-a-half months, but the report says those requests decided last year took 28.1 months on average to decide. The 2018 report found 7,486 requests had not yet received any response, while currently there are 19,518 cases that have been waiting more than two years for a decision.

The report says there are only 33 interviewers for these requests, the lowest number since 2012, when the reviews of such applications began.

Attorney Nimrod Avigal, deputy director of HIAS Israel, said: “Ignoring the asylum requests of Sudanese and Eritrean citizens takes place while the country calls them illegal infiltrators and invests huge resources to get them to give up their requests, instead of doing the basic thing it is supposed to do. As a country that was actively involved in formulating the Refugee Convention signed against the backdrop of World War II, the state does not shirk its responsibility to accept refugees but de facto prevents them from receiving basic rights by its failure to examine who is a refugee.”

He stated: “This failure has had in the past year a particularly high price, where the collapse of the labor market due to the coronavirus restrictions has meant that many asylum seekers have lost jobs, without any rights to receive unemployment benefits, health insurance or child allowances. They are left without any safety nets, rights they would have had as refugees. The price for this failure is paid primarily by each and every asylum seeker, but we’re also all paying the price as a society.”

There are some 31,000 asylum seekers from Sudan and Eritrea in Israel, who remain in the county under the policy of temporary “non-deportation” in accordance with the UN Refugee Convention, which says that a person may not be returned to a place where their lives or freedom are in danger. By this same policy, they are permitted to work but without receiving medical insurance or social benefits. Most of the Sudanese citizens fled the genocide in Darfur, the Nubba mountains and the Blue Nile region. The ministry’s opinion recommending that they should be recognized as refugees was shelved. Their requests are not being examined at all.

The authority declined to respond to this report.