‘If the government tells us to go, then we have no choice but to go.’ 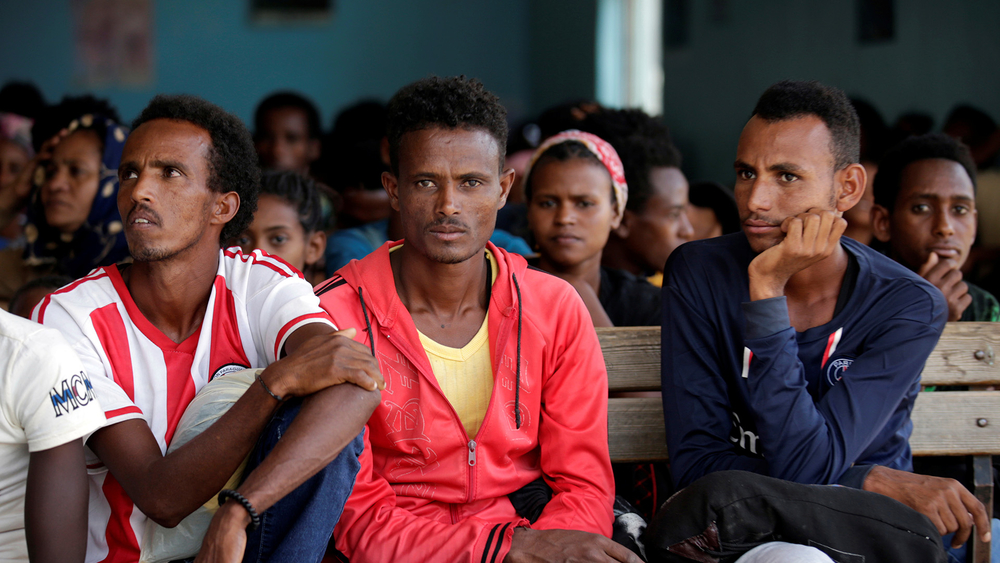 A plan by the Ethiopian government to relocate around 27,000 Eritrean refugees to two already overcrowded camps is yet to be shelved, despite concerns by aid organisations over both the risk of spreading COVID-19 and the confusion the stated policy has caused.

The UN’s refugee agency, UNHCR, has warned that both Adi Harush and Mai Aini are “already operating at full capacity”, and says that moving the Hitsats residents could “expose the refugees to the risk of COVID-19 infection and outbreak in the camps”.

Aid workers say all four Eritrean refugee camps in Ethiopia, sheltering a total of about 100,000 people, are severely overcrowded, food is in short supply, and there is poor access to water – crucial for the additional sanitation needs as a result of COVID-19.

Underlining the threat, a 16-year-old Eritrean girl in Adi Harush in June became the first refugee in the country to test positive for the coronavirus.

Several other camp residents have since been diagnosed with COVID-19, according to an aid worker in Adi Harush, who asked for anonymity. Ethiopia’s ministry of health did not respond to a request for confirmation from The New Humanitarian.

“Everyone is very afraid now,” said Tesfay, speaking by phone from Hitsats, who asked that a pseudonym is used to protect his identity.

“We live with sometimes 15 or 16 people in one room,” he told TNH. “So we don’t know how to quarantine ourselves and it feels impossible to control our environment or protect ourselves from the disease.”

Along with Ethiopia’s Agency for Refugee and Returnee Affairs (ARRA), UNHCR is working to instal hand-washing facilities, set up quarantine centres, and provide protection equipment to healthcare workers – but acknowledges that more needs to be done.

Tigray is a bone-dry region where access to water is a perennial problem. While the average daily per capita water supply across the four camps is 19.5 litres, in Hitsats it is just 16 litres – well below the minimum humanitarian standard of 20 litres per person per day.

Ann Encontre, the head of UNHCR in Ethiopia, said “efforts are being made to address the [water] shortage”, but the refugee agency has so far raised only 30 percent of its $385 million budget for 2020 – including the additional financing needed for its coronavirus response.

“Because we are refugees, if the government tells us to go, then we have no choice but to go.”

Established in 2013 in response to overcrowding in Adi Harush and Mai Aini, the Hitsats camp consists of more than 1,300 small concrete block shelters – measuring four metres by five metres – which serve as the cramped, shared living quarters for the refugees.

Despite the bleak conditions, “none of us want to go to Mai Aini or Adi Harush,” said Tesfay, who fled Eritrea after being jailed for refusing compulsory military conscription. “But because we are refugees, if the government tells us to go, then we have no choice but to go.”

Four months after the announcement, no relocations have happened, and UNHCR says it is yet to receive any official timeline for the closure of Hitsats, adding to the sense of confusion.

“Neither information on the government’s plans around the future of Hitsats nor on the options available for the refugees living in the camp have been forthcoming,” said Laetitia Bader, Horn of Africa director at Human Rights Watch.

“The lack of clarity makes it difficult, notably for humanitarian actors, to assess the impact and plan for any viable, safe alternatives,” Bader told TNH, noting that the uncertainty “risks creating significant confusion and fear for the Eritrean camp residents”.

In a letter in April informing UNHCR and other aid organisations of the decision to relocate the Hitsats refugees, ARRA said there were “relatively quality services and many unoccupied shelters available” at Adi Harush and Mai Aini, and insisted the move would be carried out in a “very coordinated way that can ensure the safety and dignity of the persons of concern”.

Encontre said her office has “not observed any expansion of shelters or other infrastructure in either Mai Aini or Adi Harush, or any other preparations to absorb the refugees from Hitsats”.

ARRA cited a lack of funding from UNHCR – which helps finance the Ethiopian government agency – as one of the reasons behind its decision to close Hitsats.

Although UNHCR has cut ARRA’s funding by 14 percent this year, “this would not justify a camp closure,” said Encontre.

TNH reached out to ARRA numerous times for comment, but did not receive a response.

Struggling with a refugee surge

Ethiopia has a long tradition of hosting refugees, currently sheltering around 769,000. Eritrean arrivals are typically escaping persecution by a violent and authoritarian government, an economy that cannot provide enough jobs, or are looking to reunite with family members who have already made the journey.

Last year, there was a surge of 70,000 refugees following a peace deal in 2018 normalising relations between the two countries who fought a two-year war that ended in 2000.

The influx “overwhelmed key infrastructure in the three camps, particularly shelter, water, and sanitation facilities,” Encontre told TNH. “This is precisely why UNHCR maintains the position that the planned consolidation of Hitsats camp requires adequate planning and time, as well as resources, to be able to expand the necessary infrastructure before any large-scale movement can take place.”

“Everyone in the camp is very scared to speak about what’s happening here.”

ARRA has given the Hitsats refugees the option of moving from the camp to cities or towns as part of Ethiopia’s progressive “out of camp” policy. More than 20,000 Eritrean refugees live in urban areas, according to UNHCR.

But Tesfay said most people in Hitsats, located about 45 kilometres from the nearest town of Shire, do not have the money or connections to survive outside the camp.

As the months have passed since the closure announcement, distrust has grown between the refugees at Hitsats and ARRA staff, and officials have been accused of trying to pressure the camp’s refugee committee into persuading their fellow refugees to leave.

“They are causing infighting and disturbing the camp,” Tesfay said of the ARRA staff in Hitsats. “Now, everyone in the camp is very scared to speak about what’s happening here.”