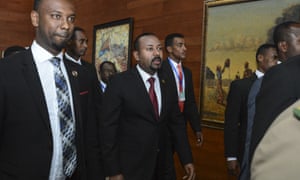 Ethiopia faces a dangerous cycle of intensifying internal political dissent, ethnic unrest and security crackdowns, observers have warned, after a series of protests in recent weeks highlighted growing discontent with the government of Abiy Ahmed, a Nobel peace prize winner.

Many western powers welcomed the new approach of Abiy, who took power in 2018 and promised a programme of radical reform after decades of repressive one-party rule, hoping for swift changes in an emerging economic power that plays a key strategic role in a region increasingly contested by Middle Eastern powers and China. He won the peace prize in 2019 for ending a conflict with neighbouring Eritrea.

The most vocal unrest was in the state of Oromia, where there have been waves of protests since the killing last month of a popular Oromo artist and activist, Haacaaluu Hundeessaa, in Addis Ababa, the capital. An estimated 180 people have died in the violence, some murdered by mobs, others shot by security forces. Houses, factories, businesses, hotels, cars and government offices were set alight or damaged and several thousand people, including opposition leaders, were arrested.

Further protests last week prompted a new wave of repression and left at least 11 dead. “Oromia is still reeling from the grim weight of tragic killings this year. These grave patterns of abuse should never be allowed to continue,” said Aaron Maasho, a spokesperson for the Ethiopian Human Rights Commission.

The Oromo community have long felt excluded from power and the benefits of Ethiopia’s booming economy. The Oromo protest movement gained momentum from 2015 and contributed to the appointment of Abiy, an Oromo from the ruling party, who promised democracy and prosperity for all.

“We are seeing a continuation of that movement, and also signs that the government’s response will be equally forceful. Once people are shot and arrested then that becomes a rallying cry,” said William Davison, an analyst based in Addis Ababa for the International Crisis Group.

The decision to indefinitely delay elections due later this year because of coronavirus – which has caused 600 deaths in the country of 100 million so far – has also worried diplomats and other international observers.

The protests in Oromia last week began amid claims that Jawar Mohammed, an Oromo opposition politician and one of Abiy’s most outspoken critics, was being denied medical attention in prison.

Young protesters described being “hunted down, shot in the streets” in the Oromia town of Aweday.

“Soldiers shot at us so I ran as fast as I could. I witnessed people getting shot in the back as they fled,” said Kedir, who took part in a demonstration on Tuesday. 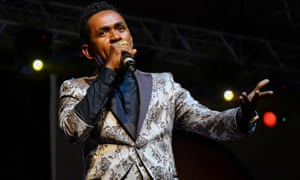 Haacaaluu Hundeessaa performing in Addis Ababa in July 2018. He was known for his activism and political lyrics. Photograph: EPA

Aliyyi Mohammed, a 22-year-old from Hirna, was taken to hospital after being shot in the thigh on Monday. Relatives said he had been “nowhere near” the protests when injured and now feared for his safety. “There are police waiting outside the hospital … We have heard that they want to arrest him as soon as he’s recovered. We can only pray they leave him alone,” said a member of the family who requested anonymity.

Relatives of Farhan Ali, 22, claimed he had been killed by security forces after leaving his home in Dire Dawa to visit a neighbour. “Soldiers killed him in cold blood,” said Bahar Omar, a cousin. “He didn’t break the law. They shot him multiple times in the back. He died right there and had no chance.”

Officials have denied such claims. “There has been violence, but we are yet to confirm reports of any killings by state forces,” said Getachew Balcha of the Oromia region’s communication affairs office.

But claims of mistreatment by security forces are fuelling the cycle of unrest in Oromia. Graphic images of 21-year-old Durassa Lolo were widely shared on social media after relatives claimed he had been tortured in the town of Asasa by soldiers who had asked him for his name.

“My brother did nothing wrong. When they heard an Oromo-sounding name, his fate was sealed. They took him to a military camp and inflicted on him unbelievable savagery. [He] is fighting for his life in hospital. This is why there are protests. The government sees us as expendable,” Durassa’s brother, Abdisa Lolo, said.

The government says Haacaaluu was murdered by Oromo nationalist militants as part of a wider plot to derail its reform agenda. The ruling party has also suggested that its rival in the northern region of Tigray, the Tigrayan People’s Liberation Front (TPLF), masterminded the conspiracy. The TPLF dominated the ruling coalition until Abiy took office. It has since joined the opposition, accusing the prime minister of planning to replace the ethnic-based federal system with a more centralised state.

Both the TPLF and Oromo nationalist groups such as the Oromo Liberation Front deny involvement in either the murder or the unrest.

Government policy has also led to fallouts within the ruling party. The defence minister, Lemma Megersa, an ally turned critic of Abiy, was last week fired and placed under house arrest. State media reported Lemma’s dismissal from the ruling party being due to his “violating party discipline”.

Analysts say it was important to recognise that recent unrest has been limited to Oromia and that there was credible evidence suggesting violence over the previous months had not simply been inflicted on protesters by the security forces but also had occurred between ethnic communities.

The office of Ethiopia’s attorney general last week defended the government’s response to the unrest, saying in a statement that investigations would reflect a “commitment to human rights”.

Abel Abate Demissie, an Addis Ababa-based analyst with London’s Chatham House, said Ethiopia’s political polarisation has deep roots, with structural problems that have been insufficiently addressed under Abiy: conflicting narratives about Ethiopia’s history, an unfinished federal project and tensions over the division of power between the centre and the regions.

“Two years down the line [after his appointment], and you find every major political group is disappointed with Abiy,” he said.