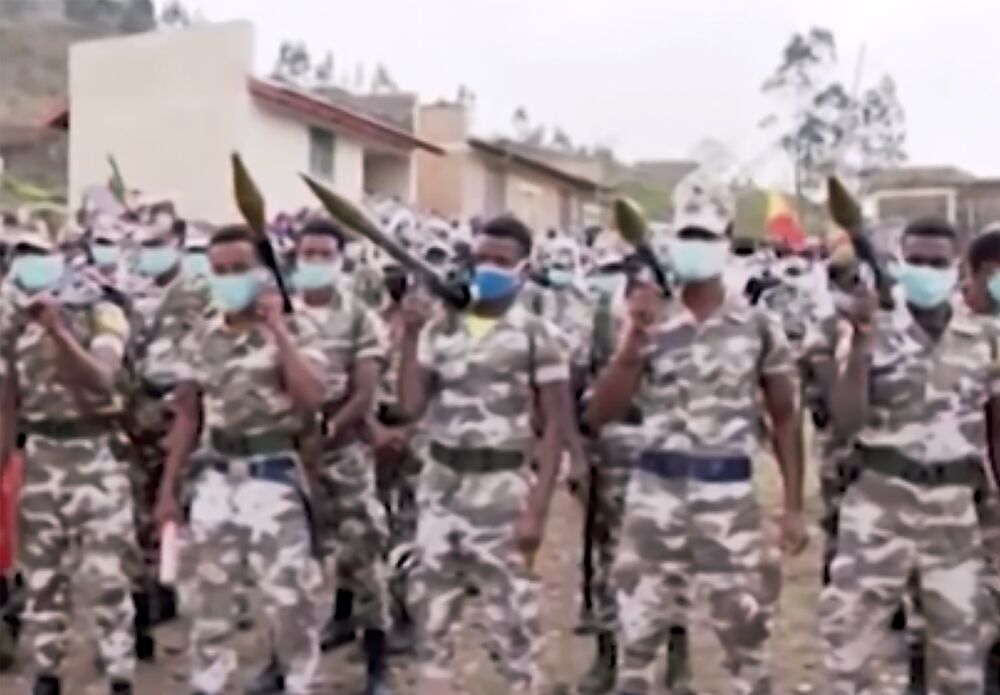 Ethiopia said its army advanced on the capital of the rebellious Tigray region as the conflict spread beyond the nation’s borders.

The government claimed its forces captured the town of Alamata in southern Tigray over the weekend, building on the seizure of other towns in the west last week. The region’s ruling Tigray People’s Liberation Front said it’s also being attacked by forces from northern neighbor Eritrea, and fired missiles at that nation’s capital on Sunday in retaliation.

“We appreciate concern from both near and far,” but now is not the time to negotiate, Redwan Hussein, state minister of foreign affairs and spokesman for the government’s Emergency Task Force, told reporters in Ethiopia’s capital of Addis Ababa. “We are saying give us time. It’s not going to take until eternity. It will be a short-lived operation.”

Hundreds of people have died and thousands have been displaced since Ethiopian soldiers began attacking Tigray on Nov. 4 after Abiy blamed the region’s government for an attack on a federal army base. Relations between Tigray and Abiy’s administration have been strained since he took office in 2018 and began consolidating power and sidelining the TPLF, which controlled the nation’s ruling coalition party for two decades.

The conflict has raised international concern of a full-blown civil war, at a time when the government is struggling to end ethnic violence that’s shaken one of the world’s fastest-growing economies. It may also delay plans to open up the economy to foreign investors that were expected to lure tens of billions of dollars in inflows.

The conflict has spawned a humanitarian crisis in the region. Even before the latest spate of violence there were 96,000 refugees and 100,000 internally displaced people in Tigray, according to the UN. At least 20,000 people have crossed into neighboring Sudan since the fighting began, it said on Sunday.

So far, most of the progress the Ethiopian military has made in Tigray has been on flatter territory in the west. The claimed capture of Alamata marked an advance on Mekele, the capital of Tigray, situated about 180 kilometres (112 miles) to the north. Diplomats though warned that making further inroads on Mekele could be much harder due to more mountainous terrain.

Tigray President Debretsion Gebremichael said Mekele was the target of bombing raids on Monday that caused civilian casualties. He also claimed drones had been deployed from neighboring Eritrea, without providing further details on whether they’d been used.

Debretsion’s claims about the latest air raid came a day after he confirmed his forces fired at least three missiles at Asmara, the Eritrean capital. The Tigrayan leader last week accused Eritrea of sending its soldiers across the northern border to attack his troops.

“The rockets fired from Tigray, and especially those targeting Asmara, will only serve to fuel the conflict and have a high risk of drawing Eritrea into the conflict,” Paarl, South Africa-based NKC African Economics said in an emailed research note. “The conflict is increasingly looking like it will be, as we warned, a protracted one with a risk of massive humanitarian cost.”

Eritrea gained independence from Ethiopia in 1991 and the two nations fought a border war between 1998-2000 in which tens of thousands of people died. The conflict didn’t officially end until two years ago, when Abiy signed a peace accord with Eritrean President Isaias Afwerki -- an action for which Abiy received the Nobel Peace Prize.