NYTimes.com: In a Dangerous Game of Cat and Mouse, Iran Eyes New Targets in Africa

Fifteen people arrested in Ethiopia were part of what American and Israeli officials said was a foiled Iranian plot against diplomats from the United Arab Emirates.

NAIROBI, Kenya — When Ethiopia’s intelligence agency recently uncovered a cell of 15 people it said were casing the embassy of the United Arab Emirates, along with a cache of weapons and explosives, it claimed to have foiled a major attack with the potential to sow havoc in the Ethiopian capital, Addis Ababa.

But the Ethiopians omitted a key detail about the purported plot: who was behind it.

The only clue was the arrest of a 16th person: Accused of being the ringleader, Ahmed Ismail had been picked up in Sweden with the cooperation of friendly “African, Asian and European intelligence services,” the Ethiopians said.

Now American and Israeli officials say the operation was the work of Iran, whose intelligence service activated a sleeper cell in Addis Ababa last fall with orders to gather intelligence also on the embassies of the United States and Israel.

They say the Ethiopian operation was part of a wider drive to seek soft targets in African countries where Iran might avenge painful, high-profile losses such as the death of Mohsen Fakhrizadeh, Iran’s top nuclear scientist, said to have been killed by Israel in November, and Maj. Gen. Qassim Suleimani, the Iranian spymaster killed by the United States in Iraq just over one year ago.

Citing Western intelligence sources, Rear Adm. Heidi K. Berg, director of intelligence at the Pentagon’s Africa command, said that Iran was behind the 15 people arrested in Ethiopia and that the “mastermind of this foiled plot,” Mr. Ismail, had been arrested in Sweden.

“Ethiopia and Sweden collaborated on the disruption to the plot,” Admiral Berg said in a statement.

Iran denied the accusations. “These are baseless allegations only provoked by the Zionist regime’s malicious media,” said a spokeswoman for the Iranian Embassy in Addis Ababa. “Neither Ethiopia nor the Emirates said anything about Iranian interference in these issues.” 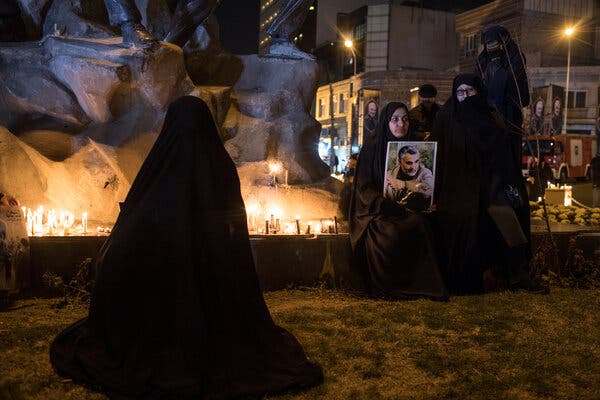 The United Arab Emirates angered Iran when it normalized relations with Israel in September as part of a series of agreements brokered by the Trump administration in its final months and known as the Abraham Accords.

A spokesman for the Ethiopian police, which named just two of the 15 people arrested, declined to say why Ethiopia did not finger Iran for the plot. Several diplomats said that Ethiopia, as Africa’s diplomatic capital and home to the headquarters of the African Union, tries to avoid getting publicly embroiled in delicate issues involving major powers.

Even so, Ethiopia’s National Intelligence and Security Service said that a second group of plotters had been preparing to hit the Emirati Embassy in Khartoum, Sudan. A Sudanese official confirmed that account.

A senior United States defense official linked the arrests in Ethiopia to a failed Iranian plan to kill the United States ambassador to South Africa, which was reported by Politico in September. The American and Sudanese officials agreed to discuss the matter on condition of anonymity because of its diplomatic and intelligence sensitivity.

Still, much about the Ethiopian arrests and alleged Iranian role remained murky. The Ethiopian police have yet to formally charge the 15 plot suspects, only two of whom have been identified. Israeli officials say that as few as three of them may be actual Iranian operatives, with the others having been caught in the Ethiopian dragnet.

And the arrests in Ethiopia come at a time of heightened political sensitivity in Iran and the United States, as the Biden administration considers its posture toward Tehran and whether to revive the Obama-era nuclear deal with Iran that President Donald J. Trump scrapped in 2018.

Adding to the pressure on President Biden, Iran’s intelligence minister suggested last week that his country might seek to obtain nuclear arms if American sanctions were not lifted soon.

While Admiral Berg confirmed several details about Iran’s role in the Ethiopian arrests, other military and diplomatic officials in Washington declined to discuss it.

In contrast, officials in Israel, whose government is openly hostile to any thaw between Washington and Tehran, highlighted the purported plot as further evidence that Iran cannot be trusted.

For all its efforts, Iran has yet to deliver on its promises of vengeance for its high-profile losses, beyond a missile attack on American forces in Iraq in January 2020, days after General Suleimani was killed.

Any plan to hit the U.A.E., as suggested by the arrests in Ethiopia, would be a curious choice, given its potential to undermine Mr. Biden’s putative nuclear diplomacy with Iran, said Aaron David Miller, a foreign policy expert at the Carnegie Endowment for International Peace.

Other analysts, though, said that the U.A.E. was high on Iran’s list of enemies and that the embassy in Ethiopia might present an unchallenging target at a time when Ethiopia is distracted by a war that has been raging in its northern Tigray region since November.

“Africa is a relatively easy place to operate, and Ethiopia is preoccupied with other issues,” said Bruce Riedel, a former C.I.A. officer now with the Brookings Institution.

The murky episode seemed destined to become the latest in a series of cat-and-mouse episodes between Iranian and Israeli operatives on African soil in recent years.

During the 1990s, Iran enjoyed close ties with Sudan under the autocratic ruler Omar Hassan al-Bashir.

Israel struck back in 2009 with airstrikes against a convoy of smuggler trucks in Sudan that aimed to stop Iranian-supplied weapons from reaching the Gaza Strip, American officials said.

But Iran’s ties to the Horn of Africa have withered in recent years, and Israeli and Emirati involvement has grown.

The Emirates helped mediate a landmark peace deal between Ethiopia and Eritrea in 2018, and now it is Emirati warships that are docked in Eritrean ports.

In November, following a call between the Ethiopian prime minister, Abiy Ahmed, and Benjamin Netanyahu of Israel, a team of Israeli drone pilots arrived in Ethiopia to help eliminate the locusts that have plagued the country’s farmers.

Weeks later, Yossi Cohen, the chief of the Mossad, Israel’s covert intelligence service, met with his Ethiopian counterpart to discuss what they termed “counterterrorism operations.”

In Kenya, two Iranians arrested in 2012 and charged with possession of 15 kilograms of explosives are now serving 15-year prison sentences. Kenyan officials said the men were members of Iran’s Islamic Revolutionary Guards Corps Quds Force. Their lawyers said they had been interrogated by Israeli intelligence while in Kenyan custody.

Four years later, in 2016, Kenya deported two Iranians who had been arrested outside the Israeli Embassy with video footage of the facility. Iran said the men, who had been traveling in an Iranian diplomatic car, were university teachers.

Iranian agents have been suspected in attacks or thwarted attacks in countries including Georgia, Thailand and India. On Feb. 4, a Belgian court stripped an Iranian envoy of his diplomatic status and sentenced him to 20 years in prison for having organized a thwarted bomb attack aimed at an Iranian opposition rally in France in 2018.

That failed plot and another in Denmark prompted the European Union in 2019 to impose sanctions on Iran’s external spy service, the Ministry of Intelligence and Security. Israeli officials say the same agency orchestrated the operation in Ethiopia.

Sofia Hellqvist, a spokeswoman for the Swedish Police Authority, referred questions about the arrest of Mr. Ismail, the alleged ringleader, to the authorities in Ethiopia.

A spokesman for the United Arab Emirates did not respond to a request for comment.

Given the stakes, it was unclear why the Iranians might risk a rapprochement with the Biden administration by mounting an operation now.

Farzin Nadimi, a specialist on the Iranian armed forces with the Washington Institute for Near East Policy, said Iran may wish to send a message to the Biden administration officials that “unless they reach a deal with Iran quickly this is what they get: a dangerous neighborhood.”