The Eritrean Legion dominates in Atapuerca

The Eritrean Legion dominates in Atapuerca

Aron Kifle (23 years old) and his compatriot Rahel Ghebreneyohannes (20) claimed victory in the XVII edition of the international cross, in which Dani Arce and Celia Antón were the best Burgos in 15th and 18th places respectively.

The Burgos Experimental Archeology Center (CAREX) was the scene this Sunday of a new edition, the XVII , of the Atapuerca International Cross , a great event for Burgos and world athletics organized by the Institute for Sports and Youth of the Provincial Council of Burgos , which once again responded to the great expectations raised and offered some exciting races in the senior category.

More than 4,000 athletes from 16 different countries took the start in the 19 planned categories , less than the more than 6,000 of the previous editions due to the reduction of registrations in the lower categories due to the anti-COVID19 health protocol, and as expected, finally African double in the absolute category and, this time, in addition to the same country, Eritrea .

Meanwhile, on the Burgos side, Dani Arce (New Balance) stood out , who crossed the finish line in 15th place , but having entered seven Spaniards ahead of him; and especially the Arandina Celia Antón (CA Adidas) , who returned one more year to leave her soul in the race and although she occupied 18th place she was the second best Spanish , only surpassed by Carolina Robles (FC Barcelona), who entered three seats ahead. A little further back, but also completing a good race, Cristina Ruiz and Lidia Campo came in 26th and 27th respectively.

In chronological order it was first the absolute female category , disputed over 8,000 groupers, the one in charge of taking the show to the CAREX Circuit of Atapuerca. With a bouquet of African athletes more numerous than in any other edition in memory, from the first moment it was clear that there would be a race ahead , that of those who would play the victory , and another one from 10-15 position backwards , that of the European athletes who would seek to ensure their presence in the continental cross - country championship next December.

Group in which Lidia Campo and Cristina Ruiz traveled, always among the first 25-30. / Photo: Fernando Miguel

In the lead, only the first two kilometers were needed for the event to be opened by eight mainly African, Kenyan and Ethiopian athletes , and along with them a single representative from Eritrea , who in the end would surprise all their rivals by taking the victory . The Kenyan Chelimo, Chebet and Jeruto would almost always remain at the forefront of the group from which athletes would gradually be released, and as they passed through kilometer 6, with chilling averages of 3:07 minutes per kilometer , there were only five runners from head.

They thus reached the last lap of the circuit , also in the last meters, in which the Kenyan sub'23 Celliphine Chepteek took off , and thus the victory was only going to be a matter of four, an Eritrean and her three great rivals from Kenya . And what seemed impossible could happen, happened. The smartest in the class , the one who had least taken the lead and a priori the most inexperienced in her 20s, Rahel Ghebreneyohannes , made use of her greatest speed tip to almost beat Beatrice Chebet and Margaret Chelimo on the finish line. , second and third respectively just 1 second.

Behind, the Italian Nadia Battocleti , in 12th place, was the best European to reach the goal, and only three places behind , but 23 seconds behind, came second , the Sevillian Carolina Robles (FC Barcelona ) , current champion of Spain of the 3,000 meter hurdles. And another three places behind, close to the Portuguese Mariana Machado, entered the Arandina Celia Antón (CA Adidas), second Spanish and therefore very clearly presented her candidacy for the European Championship .

Aron Kifle shows his might in the last kilometer

Minutes later, the men's absolute category (9,000 meters) started, here with a greater opposition of European athletes than the usual large list of Africans, and in fact, in the first two kilometers , the Spanish Carlos Mayo ( current national cross champion), Javi Guerra , Abdessamad Oukhelfen and Ouassim Oumaiz (Cuevas de Nerja), winner in Atapuerca in 2019; Along with them, Dani Arce (New Balance) from Burgos, who, accompanied by Adel Mechaal for most of the race, was even setting the pace in the lead.

Dani Arce always showed his face, first in the leading group and then in a second platoon. / Photo: Fernando Miguel

However, when the Africans began to rev up the rhythm and little by little they were stretching the group of about 20 units that stood together as they passed by kilometer 4, several runners were losing their rope (among them Guerra, Arce and Mechaal) and already it was only Oukhelfen and Mayo who held the guy.

Thus, in a group now of only 9 athletes, the race would reach the last 2,000 meters, in which Carlos Mayo was the one who clearly closed his head so that the Spanish responsibility fell on Oukhelfen. Along with him, the Eritrean Aron Kifle entered stronger than anyone in the last lap to go alone ahead in search of victory, and behind him the other two places of the podium would be played by Rodrigue Kwizera, from Burundi, and the Ugandan brothers Joel and Thomas Ayeko, who in this order would occupy the second, third and fourth places just one and three seconds behind the winner respectively.

Along with them, huge in fifth place , the Spanish Oukhelfen , eighth Carlos Mayo and fifteenth the Burgos Dani Arce , who once again gave everything to his countrymen although without being able to prevent up to seven Spanish runners from entering ahead of him , most of them specialists in cross-country, in principle they have more options than him to go to the European.

Great fourth place for Rubén Álvarez in the sub'20

As for the rest of the categories, all of them with an important presence of athletes from Burgos, the triumphs of Laura Segura (Image FDR) in the popular female race and of the young Laia Cariñanos (At. Valle de Mena) in the sub category stood out above all . '14. In addition, Santiago Vivanco (UBU) occupied second place in the men's popular event, and the Arandino Rubén Álvarez (UBU) achieved a more than meritorious fourth place in the sub'20 category that puts his classification for the European Championship very close . He will have to endorse it next Sunday at the Cross de Itálica, in Seville.

Abdessamad Oukhelfen would be fifth in the race, first Spanish. / Photo: Fernando Miguel 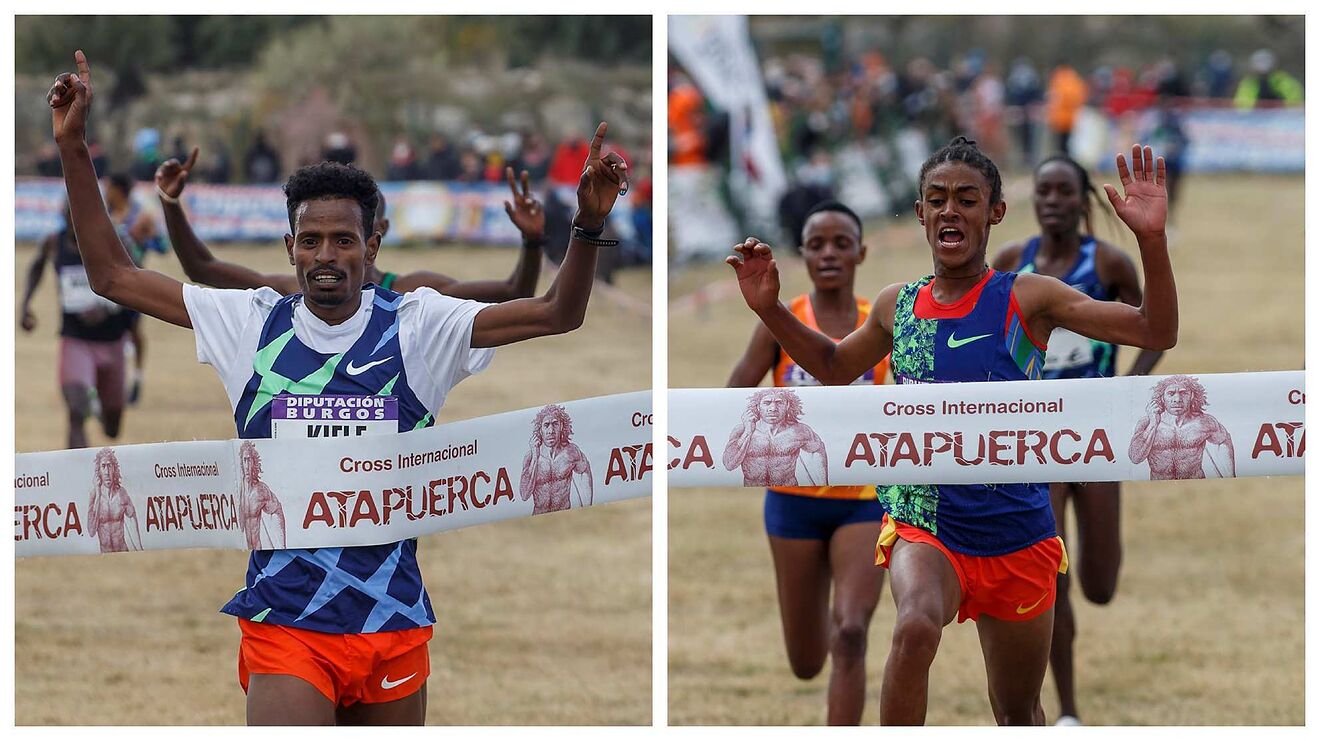