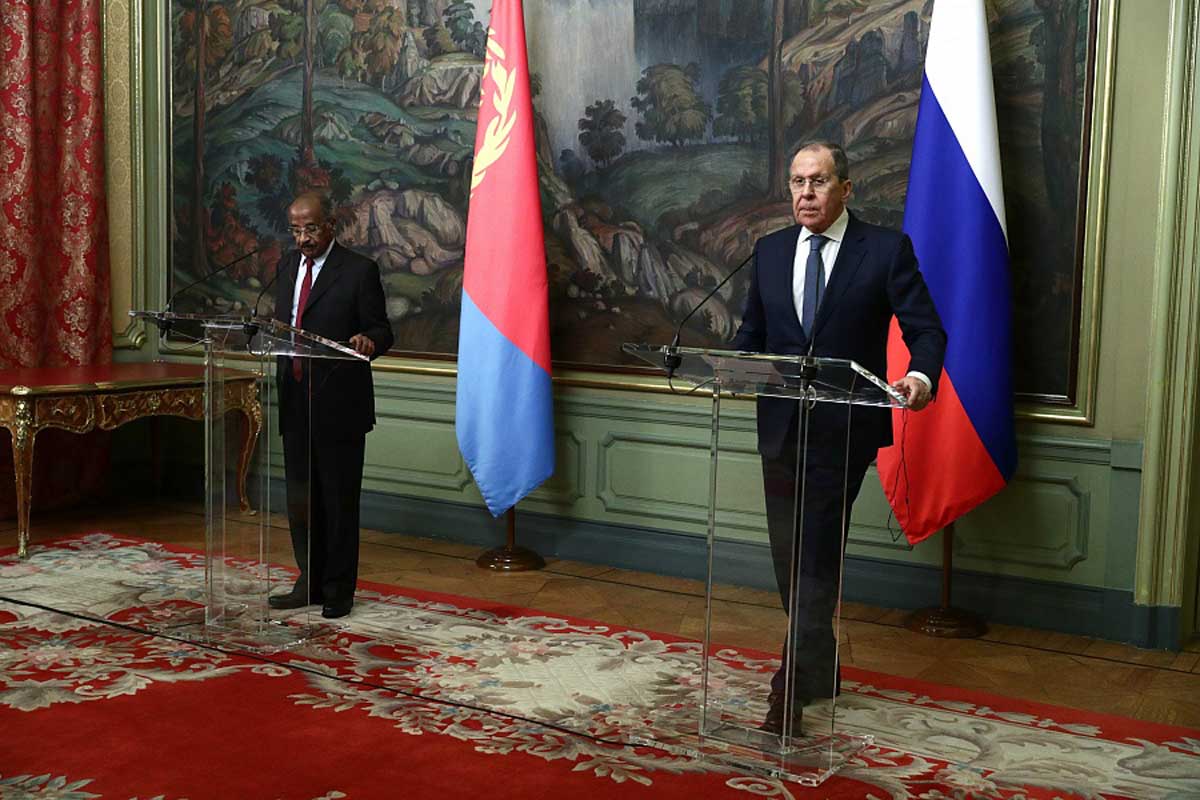 Foreign Minister Sergey Lavrov has reaffirmed Russia’s strategic interest to make coordinated efforts aim at building logistics hub along the coastline of the Republic of Eritrea during diplomatic talks attended by Foreign Minister of the State of Eritrea Osman Saleh who, on April 27, paid a working visit to Moscow.

Ahead of the diplomatic talks, there was the speculation that Russia would use Eritrea that voted against the United Nations resolution on March 2. Late February, Russia started “special military operations” directed at demilitarizing and denazifying in the post-Soviet republic of Ukraine.

After the heated debates and discussions, the UN General Assembly overwhelmingly adopted a resolution demanding that Russia immediately end its military operations in Ukraine. According to reports, the Assembly had all 193 UN Member States in attendance. A total of 141 countries voted in favour of the resolution, which reaffirms Ukrainian sovereignty, independence and territorial integrity.

Reports say that Africa, however, presented a divided front that reflected in the attitude for voting. Out of the 35 countries that abstained from voting, 17 (nearly half) were Africans. Twenty-eight African countries voted in favour, seven others did not participate in the vote, while Eritrea backed Russia. Eritrea’s expression of support has policy significance for Russia. It glaringly showcase its expression of traditional friendly interest and solidarity.

With the changing global politics, Russia and Eritrea noted the similarity of views on the main current issues, including the importance of making international affairs more democratic and ensuring the right of nations to choose their own future, their political and socioeconomic development paths and models, Lavrov said during the joint media conference.

“We presented our views on the situation in and around Ukraine. We pointed out the goal of our actions is to protect people from the military threat posed by the Kiev regime and to demilitarize and denazify that country. We expressed appreciation for Eritrea’s objective and responsible position regarding the situation in Ukraine,” he said.

Highlighting the general developments in the African Horn region, Lavrov reassured Moscow’s continuous contribution towards stronger stability and security in Africa, including on the basis of the African Solutions to African Problems principle.

Both ministers reviewed some aspects of preparations for the second Russia-Africa summit during the third quarter of 2022. On economic cooperation, the Russian Ministry of Foreign Affairs, in its official media statements, said the agenda for Russia-Eritrea cooperation has a key focus on the implementation of potential joint projects, including the logistics hub in Asmara.

Eritrea, bordered by Ethiopia in the south, Sudan in the west, and Djibouti in the southeast, has an extensive coastline along the Red Sea. It could be the busiest shipping lanes, with the controlling access to the Red Sea and the Indian Ocean. The commercial activities revolve around this strategic location as a transit point and the strategic location also makes the country prime for an increased military presence. This is the strategic importance for Russia.

Against this backdrop, Lavrov and Sahel have previously discussed this logisgics project. For instance, 0n August 31, 2018, Lavrov held talks with Saleh in southern city of Sochi. In fact, that year 2018 marked 25 years of diplomatic relations between Russia and Eritrea.

Lavrov spoke extensively about economic cooperation. According to him, Russia’s truck maker KAMAZ was already working in Eritrea, supplying its products to that country, as was Gazprombank Global Resources, which was building cooperation in the banking sector. The same year 2018, concrete talks were held to build a logistics centre at the port of Eritrea, that makes world’s class logistics and services hub for maritime transportation through the Suez Canal and definitely set to promote bilateral trade.

Still that same year, Eritrea was interested in opening a Russian language department at one of the universities in the capital of the country, Asmara. Lavrov further indicated: “We agreed to take extra measures to promote promising projects in the sphere of mining and infrastructure development and to supply specialized transport and agricultural equipment to Eritrea.”

According to official website of the Foreign Ministry, the information posted in 2018 to media questions concerning the Russian side that noted positive trends on the Horn of Africa, and steps being taken by both sides to settle conflicts in the region, Lavrov replied: “we cooperate in many diverse areas: natural resources, all types of energy engineering, including nuclear and hydroelectric energy, and new sources of energy, infrastructure in all its aspects, medicine, the social sphere, transport and many more.”

Regarding the conflicts in the Horn of Africa, Lavrov pointed back in 2018 that “Eritrea and Ethiopia are our longstanding partners. We wish them success in stepping up the normalization process that will benefit all, including the people of both countries, in the economy as well.”

Russia and Eritrea have shown interest in deepening the inter-state dialogue and economic cooperation, objective conditions exist for enhanced interaction between our two countries in the international arena. The Republic of Eritrea plays an important role in sub-regional affairs. As already known, despite its location it has some competitive advantages and at the same time a number of problems with its neighbour Ethiopia.

The undemarcated border with Ethiopia is the primary external issue facing Eritrea. Its relations with Ethiopia turned from that of cautious mutual tolerance, following the 30-year war for Eritrean independence, to a deadly rivalry that led to the outbreak of hostilities from May 1998 to June 2000 which claimed approximately 70,000 lives from both sides. A peace treaty between both nations was signed on 8 July 2018, formally ending the conflict with Ethiopia.