Germany and France have dispatched their top envoys to Ethiopia to revamp relations strained by the Tigray conflict. Analysts say the EU member states are keen to support the reconstruction process but challenges remain.

Baerbock will be accompanied by her French counterpart Catherine Colonna who issued a statement last Thursday, saying their trip will underscore their support for the African Union-brokered peace deal.

The two-year conflict began after TPLF fighters attacked a military base in the north of Ethiopia, prompting the country's Prime Minister Abiy Ahmed to declare war on the TPLF.

Subsequent fighting — which expanded to include local militias from the Amhara region and soldiers from neighboring Eritrea — killed tens of thousands of people and displaced millions of others.

The Ethiopian government then imposed a blockade on Tigray, which cut off all telecommunications and hindered the delivery of humanitarian assistance.

However, since the peace accord was signed, the blockade has been lifted, aid is finally flowing, and even the national carrier, Ethiopian Airlines, has resumed domestic flights to Tigray. 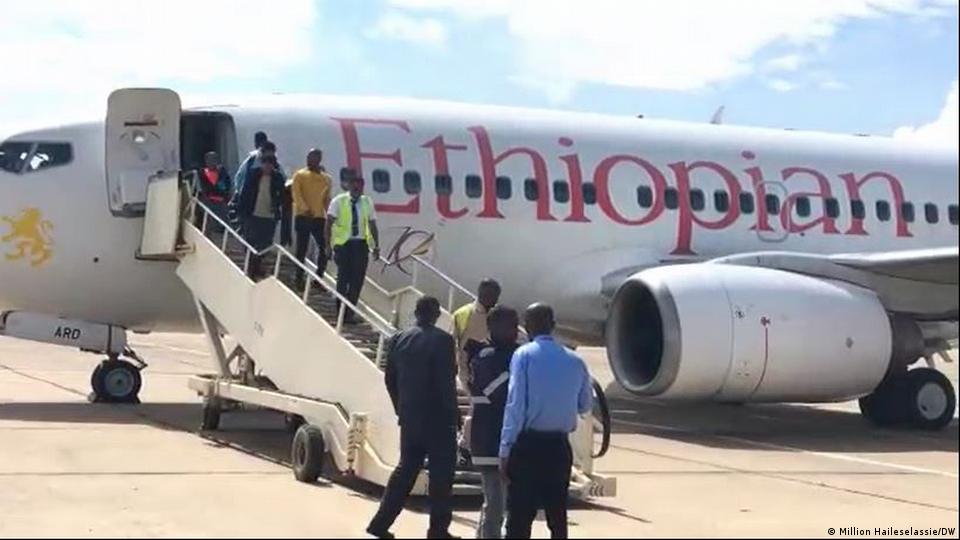 "They [Baerbock and Colonna] want to make sure that the peace talks that resulted in the signing of the cessation of hostilities between the Ethiopian government and the Tigrayan People's Liberation Front would work and to make sure that arrangement would bring lasting peace to Ethiopia," Mengistu Assefa, a political analyst and commentator in Addis Ababa, told DW.

The European Union is one of the African Union's biggest donors. However, Ethiopia did not invite the EU to the peace talks, which resulted in the signing of the agreement in Pretoria. According to some observers, that decision led to some discontent in Brussels.

"All relationships of EU member states [with Ethiopia] have been difficult during the conflict in Tigray in the last two years," Annette Weber, the EU Special Representative to the Horn of Africa, told DW.

"But the German relationships have been very long-standing, very reliable relations that have been profound. And what we see right now is warming up again after the [Tigray] peace agreement was signed." 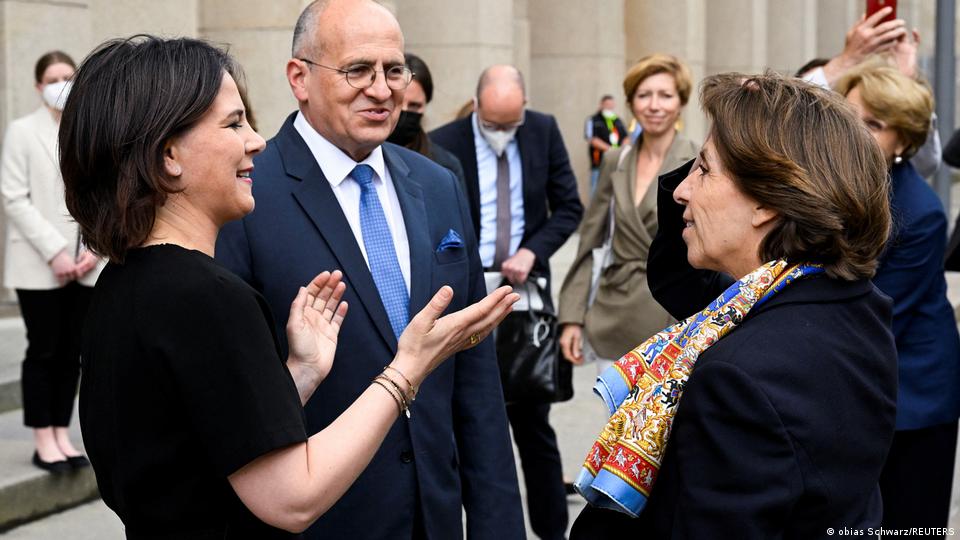 * Baerbock (L) and Colonna (R) are expected to travel to Tigray to see how the peace deal is being implementedImage: obias Schwarz/REUTERS

Relations between the EU and Ethiopia declined after the Tigray civil war broke out, according to Mengistu.

Now that the peace agreement is holding so far, there has been an improvement in relations between Addis Ababa and Brussels. "That's likely to continue if there is progress in the peace process with gradual reinstatement of development financing," William Davison, senior analyst for Ethiopia at the International Crisis Group, told DW.

"The major issue here is the positioning of the major European Union member states, particularly France and Germany, which at times have taken a somewhat softer line on the [Ethiopian] federal government than the EU institutions themselves," Davison said.

He noted that as the peace process advances, "we're likely to see that softer, more accommodating approach taken by the EU's member states, but also from the institutions themselves. This, he adds, would lead to a gradual improvement in relations between the EU and Ethiopia.

According to Weber, Baerbock and Colonna's visit seeks to acknowledge that a peace deal was inked after two years of a very, very bloody and destructive war.

"But of course, the steps that are necessary between now and then are still plenty. That's the messaging that will be delivered by the two foreign ministers." 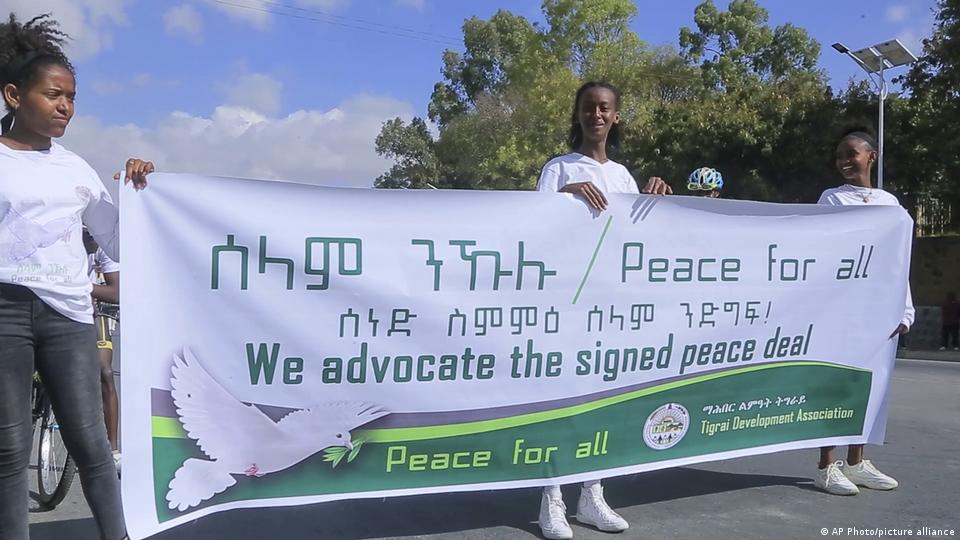 * Ethiopians have been calling on all sides to stick to the peace dealImage: AP Photo/picture alliance

Weber pointed out that the EU has long engaged in ongoing discussions and communication between the two sides. For example, the bloc fought hard to gain access for humanitarian aid in Tigray and to integrate people in Ethiopia's Amhara and Afar regions affected by the Tigray conflict.

"All the member states and the EU have played quite an important role without being in the limelight," she said, stressing that the EU has been clear that there won't be a normalization until and unless the conflict has been resolved and unless humanitarian access and services are restored.

During the height of the conflict, the Ethiopian government was of the view that the EU supported the TPLF and sought to force concessions from Abiy.

"The Ethiopian government felt that the EU stood against it by supporting the Tigrayan rebels and wanted to push Ethiopia by putting undue pressure on it," Mengistu said.

"That stance, that rhetoric, was widely sold domestically. It was very impactful on the international arena by pushing Ethiopia to side with the usual [EU] rivals — such as China and Russia — especially in discussions on the conflict at the UN Security Council meetings."

He added that both at the grassroots and elite levels, there was a strong anti-Western feeling that will probably persist and continue to affect Ethiopia's foreign policy.

Mengistu urged the German and French envoys to seize the opportunity to restore relations with Ethiopia in order to benefit global cooperation. 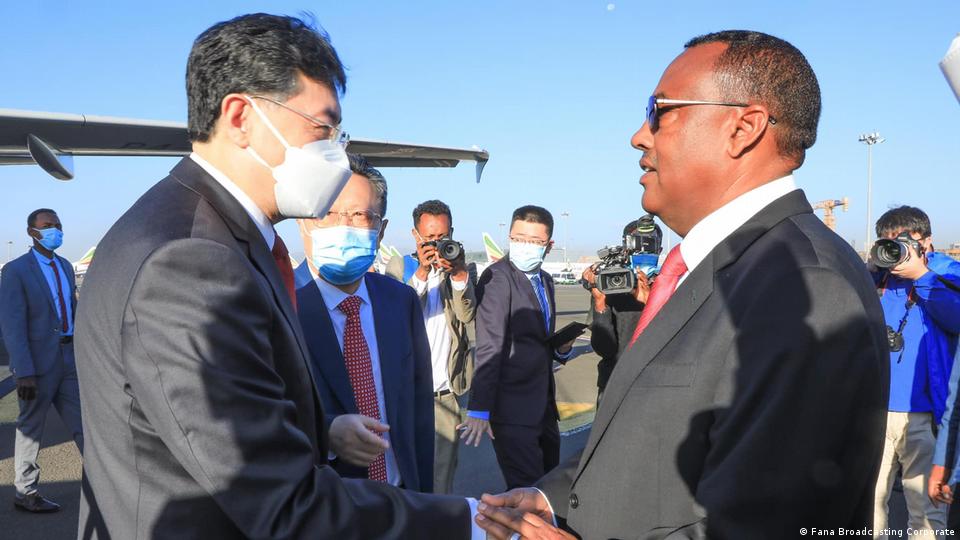 Geopolitical battle in the Horn of Africa

Before Gang's visit, UK's Foreign Secretary James Cleverly was also in Ethiopia, where he witnessed the delivery of humanitarian aid.

To analyst Mengistu, the Horn of Africa has become a focal point of a geopolitical rivalry.He said France may want to explore ways to rebuild their bilateral relations that soured during the conflict. For example, Paris canceled its assistance to Ethiopia's Navy project and wants to resume it as Moscow is also competing for the same project.

Mengistu said the EU's critical stance on Ethiopia could be diffused after the two influential EU members start to court Abiy.